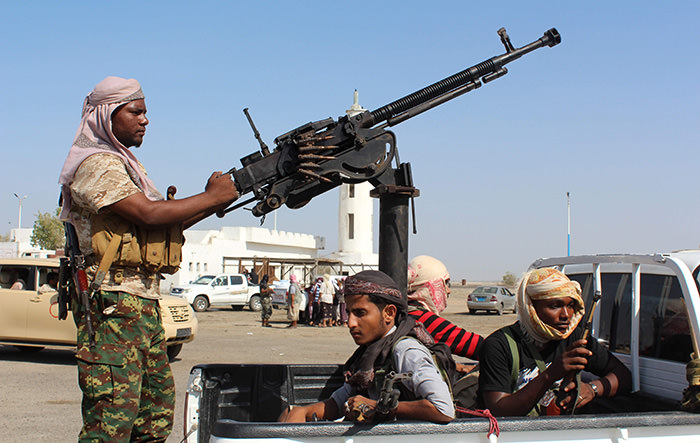 More than 800 al-Qaeda militants were killed in an offensive by Yemeni government forces aided by the Saudi-led coalition in the group's main stronghold in the port city if Mukalla, the coalition forces said.

The coalition said in a statement carried by Saudi state news agency SPA late on Sunday night that many militants fled the Hadramout provincial capital they had held for a year after the offensive by supporters of President Abd-Rabbu Mansour Hadi backed by Saudi and Emirati special forces.

Fighter jets from the mostly Gulf Arab alliance pounded the city on Sunday and killed 30 militants, residents said, as the military coalition ramped up its offensive to wrest swathes of southern Yemen from al Qaeda.

Sunday's air strikes on al Qaeda in Mukalla were carried out in coordination with a ground offensive in militant-controlled territory further west, a Yemeni military official said.

The push is being led by the United Arab Emirates, which has been training and arming local recruits for months, according to southern Yemeni tribal and political sources.

Fractious Yemen has remained in turmoil since September of 2014, when Shia Houthis overran the capital Sanaa and other parts of the country.

Saudi Arabia said its year-long campaign in Yemen was launched in response to appeals by President Abdu Rabbu Mansour Hadi, who temporarily sought refuge in Riyadh after Sanaa fell to the Houthis.

Around 6,200 people have died in the war, which has focused mostly around the country's Houthi-controlled centre and north, while a security vacuum spread in the south.

The Houthis control the capital Sanaa in the north while the Saudi-backed Yemeni government has tried to re-establish itself in the southern port city of Aden. Only in the last month has its fledgling army begun to make gains against the militants and organise to take back lost territory.

The Yemeni civil war has had an significant impact on the country's civilians, particularly children. United Nations and UNICEF has repeatedly raised concern over the humanitarian crisis, signaling disastrous and deadly impacts of impoverishment due to the war. According to U.N. figures, nearly more than 6000 people have been killed in the last 12 months. Meanwhile, there has been about 30,000 people wounded in the war. Reports also indicate that nearly half of the killed in the last 12 months have been civilians.