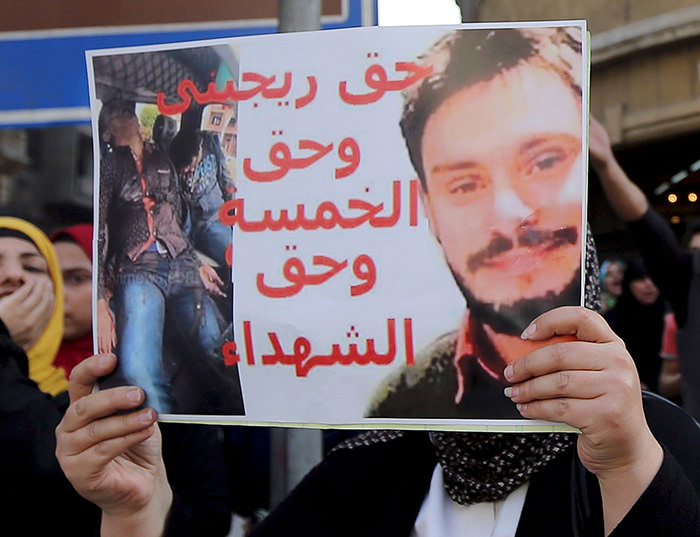 Poster calling for justice to be done in the case of the recently murdered Italian student Giulio Regeni during a demonstration (Reuters Photo)
by Anadolu Agency Apr 27, 2016 12:00 am

Egyptian authorities have arrested a legal consultant for the family of Italian student Giulio Regeni, who was tortured and killed in Egypt.

"Ahmed Abdullah was detained for four days pending investigation into charges against him," Doaa Mustafa, a lawyer with the Cairo-based Egyptian Commission for Rights and Freedoms (ECRF), told Anadolu Agency on Tuesday.

In a statement, Regeni's family said they were "distressed" by the recent wave of arrests of activists, lawyers and journalists in Egypt, some of whom were "directly engaging in the search for the truth on the abduction, torture and murder of Giulio".

The statement said that Abdullah's arrest was of particular concern given the role his organization played in consulting with the Regeni family attorneys in Egypt.

Regeni, a 28-year-old doctoral student at Cambridge, disappeared in Cairo on the eve of the fifth anniversary of a popular uprising that unseated autocrat Hosni Mubarak in 2011.

His body-bearing signs of extreme abuse and torture-was found in a ditch on Cairo's outskirts more than one week later.

Regeni's death has strained Egypt's relations with Italy, which summoned its envoy in Cairo earlier this month in protest at the slow path of investigation into the murder.

While Egyptian authorities deny any involvement in the grisly murder, observers say the signs of torture on the young man's body were similar to those associated with Egyptian police torture.