Egyptians fear joining demonstrations against El-Sissi over sale of islands 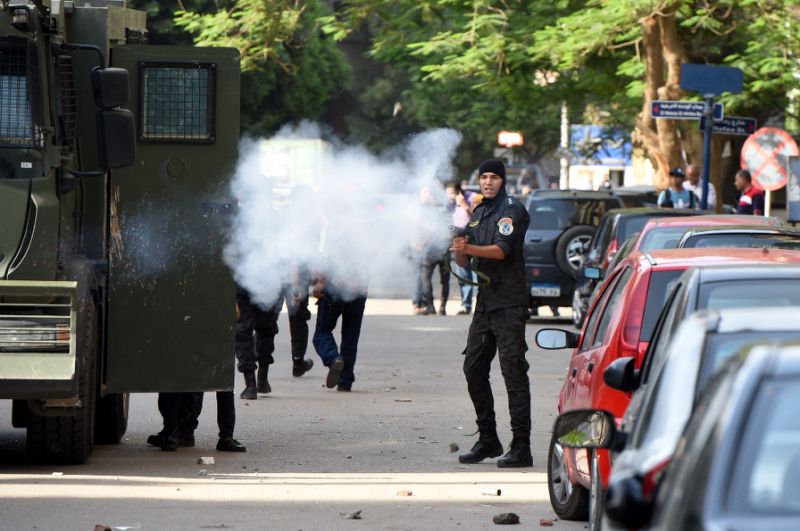 Following the declaration of demonstrations against the regime, thousands of policemen have been deployed in Cairo. Egyptians had to remain at home since the regime has brutally mistreated protesters during previous mass demonstrations

Thousands of Egyptian riot police on Monday stifled plans for mass demonstrations against The rule of President Abdel-Fattah el-Sissi who led a military coup in 2013 and ousted Egypt's first democratically elected President Mohammad Morsi, using tear gas, birdshot and beating up young activists to quickly disperse flash protests by hundreds in what evolved into a day of cat-and-mouse games across parts of Cairo. With overwhelming numbers, police took over Cairo locations designated by organizers as gathering points, checking IDs and turning potential protesters away under the threat of arrest. At least 100 protesters had been arrested by nightfall, mostly in the Dokki district in Cairo's twin city of Giza, according to activists and rights lawyers. The Press Syndicate said a total of 11 journalists were arrested during the course of the day and that all but one was released hours later. "We have been running back and forth. Every time we gather in one place, they attack us," said one female protester. "The minute we started gathering they attacked us and we fled," said another protester from the impoverished and densely populated Cairo district of Nahya. Both protesters requested anonymity because they feared reprisals.

Fearing another round of unrest after years of turmoil, some city residents and shopkeepers were hostile toward the protesters on Monday. "The sons of dogs want to bring down the state," shouted one el-Sissi supporter as he watched police beat up two protesters. Determined to prevent the protests, police took up positions early on Monday in Cairo's Tahrir Square, the epicenter of the 2011 uprising, and deployed on the city's ring road, downtown and at a suburban square where hundreds of pro-democracy protesters were killed when security forces broke up their sit-in in August 2013. The sheer number of policemen on the streets and fear of arrest prevented protesters from gathering, often forcing them to trickle out from designated gathering points to assemble elsewhere. Monday's arrests followed the detention in recent days of scores of activists in pre-dawn house raids and downtown cafe roundups as authorities sought to derail plans for the demonstrations. Rights groups say as many as 100 have been arrested since late last week, with some picked up by police just hours before Monday's protests were due to start. Monday's most serious violence took place at a residential square in Dokki, where some 500 protesters led by prominent activists gathered. Chants of "leave, leave" directed at el-Sissi, echoed across the square, along with "bread, freedom, the islands are Egyptian." Masked policemen atop armored vehicles and in full riot gear arrived 10 minutes later and immediately fired tear gas and birdshot. The protesters fled in panic. In Dokki, dozens of riot and special forces' policemen laid siege to the headquarters of the Karama, or Dignity, party founded by opposition leader Hamdeen Sabahi, the only candidate who ran against el-Sissi in the 2014 presidential election and who filed a lawsuit against el-Sissi for surrendering the islands.

The central issue of Monday's protests was Egypt's recent decision to surrender to Saudi Arabia control of two strategic Red Sea islands in a surprise deal. Egypt says the islands of Tiran and Sanafir at the mouth of the Gulf of Aqaba off the coast of Sinai belong to Saudi Arabia, which placed them under Cairo's protection in 1950 because it feared Israel might attack them. The announcement came during a visit to Egypt this month by the Saudi monarch, King Salman, as the kingdom announced a multi-billion-dollar package of aid and investment to Egypt, fueling charges that the islands were sold off. Already, the issue of the islands has sparked the largest protests since el-Sissi assumed power in June 2014, when on April 15 some 2,000 protesters gathered in downtown Cairo to shout slogans against el-Sissi for giving up the islands, calling on him to step down. El-Sissi has dismissed the controversy and insists Egypt has not surrendered an "inch" of its territory. The dispute over the islands is the latest in a list of grievances held by a large segment of Egyptians, especially pro-democracy youth, against the president.

The latest protests add one more source of concern for el-Sissi as he faces mounting criticism over the ailing economy and the fallout from this year's abduction, torture and killing of an Italian graduate student in Cairo. The incident has poisoned relations with Italy, one of el-Sissi's staunchest EU supporters and Egypt's biggest European trade partner. "Egypt needs the truth revealed to its people: Through dialogue, not suppression, with documents, evidence and maps; not security raids and random detentions," prominent columnist Abdullah el-Sinnawy warned in Monday's edition of the Al-Shorouk daily about the uproar over the islands. In a thinly veiled warning to the president, he said the issue could produce "cracks in legitimacy."

After el-Sissi took power, the international community voiced its concern weakly against the human rights violations, mass death sentences, arbitrary detentions and the suppression of all opposition groups by the el-Sissi rule, despite the repeated warnings of rights groups. Moreover, the U.S. did not condemn the mass killing of people in Egypt as happened in Rabaa Square in 2013. The systematic and widespread killing of at least 817 demonstrators by Egyptian security forces in July and August 2013 probably amounts to crimes against humanity, Human Rights Watch (HRW) said in a report, released last August. "In Rabaa Square, Egyptian security forces carried out one of the world's largest killings of demonstrators in a single day in recent history," said Kenneth Roth, executive director of HRW. The Cairo administration shook the world frequently last year as Egyptian courts sentenced hundreds of people to death and to life in prison. A recent report by the Egyptian Center for Economic and Social Rights, a local nongovernmental organization, said that more than 41,000 Egyptians had been subject to prosecution since Morsi's ouster.
Last Update: Apr 27, 2016 1:07 am
RELATED TOPICS