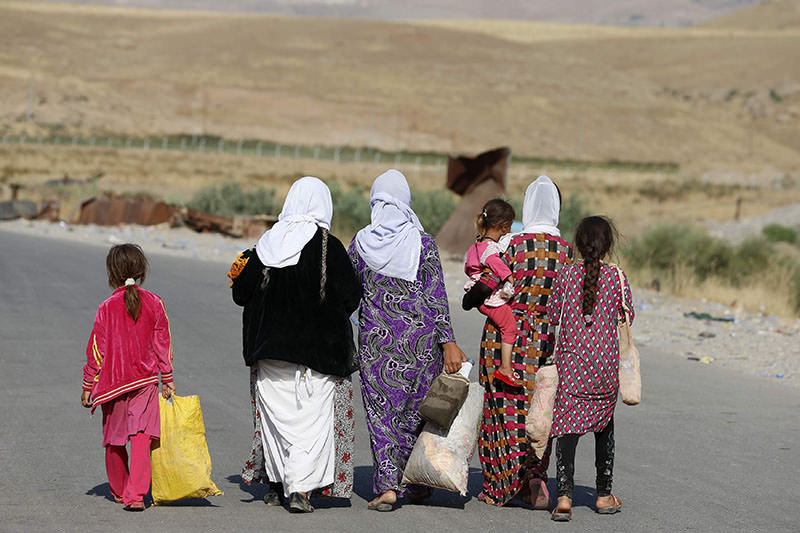 Archive photo: Women, children, fleeing the violence in the Iraqi town of Sinjar, walk to a refugee camp after they re-entered Iraq from Syria (Reuters)
by May 09, 2016 12:00 am

In the photo that Aziza produces on her mobile phone, her 14-year-old daughter Layla is wearing a pink satin dress and smiling meekly at the camera.

"This was her engagement party," said 35-year-old Aziza. "(Her fiance) was 22 years old. His family came to us at various times to ask for our daughter. The third time we accepted."

At first Aziza and the young man's parents struggled to convince the two to accept the arrangement but when they did, the wedding preparations were quick to get underway.

It was not the first time Layla had received a suitor. Her parents had turned down many offers of marriage back in Mosul, the family's home town before they fled a campaign by Daesh to capture Iraq's second biggest city in 2014.

Since then, Aziza, her husband and six children have found shelter in Iraq's northern Kurdish region, some of the 1 million Iraqis (IDPs) living in camps for people displaced by conflict.

"I refused in Mosul because I didn't want her to get married until after school. Here in the camp she was pushed to accept," Aziza said.

The names of both mother and daughter have been changed to protect their identity for fear of repercussions within their community.

Child brides are not unusual in Iraq - Aziza herself was 16 when she married Layla's father - but uncertainty about the future in a country torn apart by violence and economic hard times has made early marriage more common.

While the minimum age of marriage in Iraq is 18 - 15 years with parental consent - U.N. statistics show that almost one in five women marry before they are 18.

Aid workers in refugee and IDP camps who have seen an increase in child marriage say many parents hope that their daughters will be better protected against assault or sexual violence if they are married.

Others are desperate to fend off poverty and see the bride price or dowry as a way of getting money which may benefit other members of the family.

A lack of education is another push factor. In Iraq, girls stay in school only until the age of 10 on average, according to the Save the Children.

"Before (the conflict) they had a future ... now they have to get married as young as 12 because their fathers think that if they get married they'll be safe," Rezhna Mohammad, director of psychological services for local charity SEED, told the Thomson Reuters Foundation.

The lack of privacy in camps, including the sharing of latrines and showers means women and girls are exposed to men who do not belong to their familial circle.

"They want the women to be protected - moral and social protection. They say that marriage is protection," Mohammad said, adding: "For displaced Iraqis the economic reasons are the most impacting - they left with nothing, not even their IDs."

By allowing a daughter to marry, parents entrust their parental responsibilities to the groom and his family, who are obliged to accept the new wife into their household.

However, this often isolates her from family and friends, particularly if the husband lives in a different camp or town, adding a fresh trauma to her experience, rights experts say.

Early marriage not only deprives girls of education and opportunities but increases the risk of death or childbirth injuries if they have babies before their bodies are ready.

"(Sometimes) she cannot breast feed and doesn't know how to connect with the baby so other family members have to (take care of the baby) and this creates much tension inside the family," Mohammad said.

"(The girl's) status as a mother and as a wife is compromised. She feels like a failure and doesn't know why she cannot do what she's supposed to do."

Child brides are also often disempowered and at greater risk of domestic and sexual violence and HIV, campaigners say.

For Abdul Wahed, a psychologist with the aid agency Terre des Hommes, child marriages are often seen by Iraqis as a cultural rite of passage.

"When we ask them why they married their child off they say, 'Because we're used to it, we were also married at that age'," Wahed said.

For Layla, now 16, the threat of moving out of the familial tent never materialized. In a change of heart, Aziza and her husband called their daughter's engagement off.

"At the start my husband was pressured into it and accepted, but after the engagement he had a pain in his heart," Aziza said.

Since the engagement was broken off a number of men have come to Aziza's tent to ask for Layla's hand in marriage. One man recently offered the family $4,000 in exchange for the teenager, but was refused.

"I've promised myself that she won't marry until she finishes school," Aziza said.

"Education is important, I didn't get an education, at least I can help my daughters get one. I want them to finish school and become engineers or doctors," she smiled proudly.