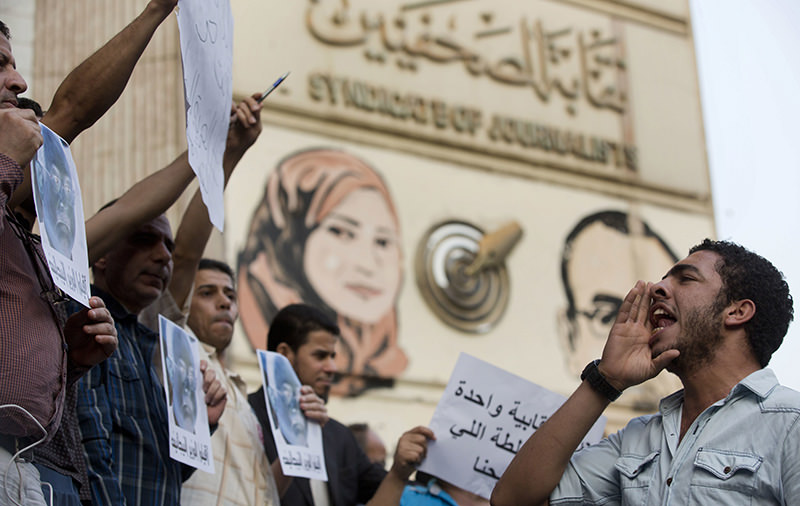 Journalists and activists chant slogans during a protest in front of the Journalists' Syndicate in Cairo, Egypt, Thursday, May 12, 2016 (AP Photo)
by Anadolu Agency May 15, 2016 12:00 am

In April, the Egyptian government penned a maritime border agreement with Saudi Arabia under which Cairo ceded the islands of Tiran and Sanafir to Riyadh.

The government insists the two islands, both of which are located at the mouth of the Gulf of Aqaba, were originally Saudi territory but had been taken over by Egypt in 1950 amid concerns they would be occupied by Israel.

Thousands of Egyptians took to the streets in late April to protest the deal amid accusations that President Abdel-Fattah al-Sisi was "selling" sovereign Egyptian territory to Saudi Arabia.

Egyptian security forces detained dozens of demonstrators and referred them to trial for violating a law banning unauthorized street protests.

On Saturday, a court slapped 101 people with five-year jail terms -- and 51 others with two-year sentences -- for taking part in last month's protests, a local judicial source told Anadolu Agency.

The media was not allowed to attend the court session in which the sentences -- which remain subject to appeal -- were delivered.

Meanwhile, Egypt's April 6 youth group has called for more demonstrations on Tuesday to protest the maritime agreement with Saudi Arabia.

Tuesday's demonstration will coincide with another court session in which a lawsuit calling for the maritime deal to be scrapped will be considered.

Egypt has been roiled by turmoil since mid-2013, when the military -- then led by al-Sisi -- ousted Mohamed Morsi, the country's first democratically elected president.