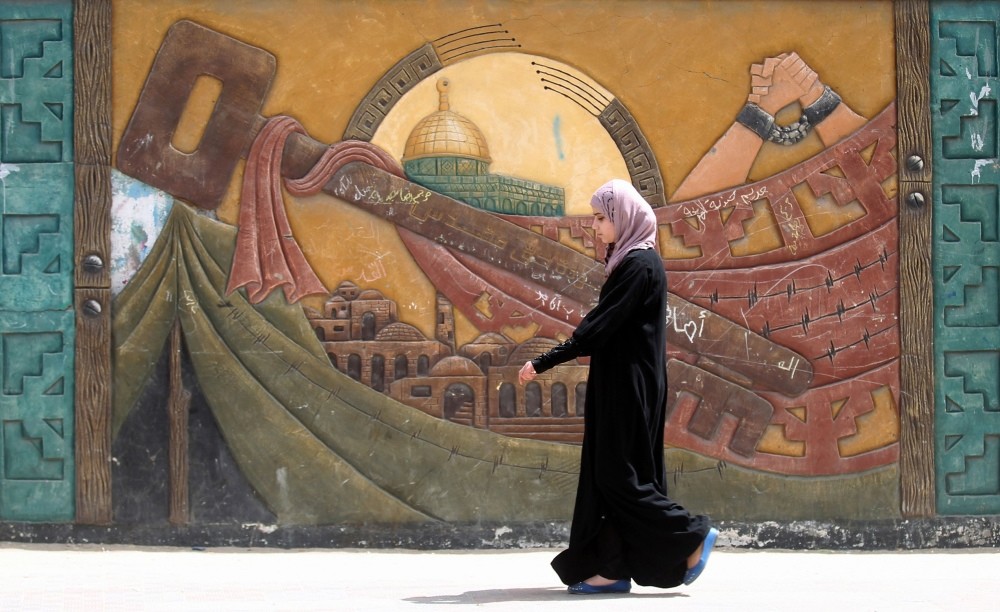 Palestinians use the word u201cNakbau201d to refer to destruction of hundreds of villages in historical Palestine and expulsion of hundreds of thousands of Palestinians from their land by armed Zionist gangs to make way for the new state of Israel in 1948.
by Anadolu Agency May 18, 2016 12:00 am

In 1948, the Palestinian village of Beit Nabala saw tremendous persecution, which is called the 'Nakba,' meaning 'catastrophe,' just after the foundation of Israel, when the residents had to leave their homeland to save their lives

Ahmed Safi, an 89-year-old Palestinian, hails from the Palestinian village of Beit Nabala in what is now central Israel. But Beit Nabala no longer exists: it was razed to the ground by Zionist forces following Israel's establishment 68 years ago. "I remember the Nakba like it was yesterday," Safi told Anadolu Agency (AA), "when Israeli gangs stormed our village, demolished our home and drove us from our land."

Palestinians use the word "Nakba" (meaning "catastrophe" in Arabic) to refer to the destruction of hundreds of villages in historical Palestine - and the expulsion of hundreds of thousands of Palestinians from their land by armed Zionist gangs - to make way for the new state of Israel in 1948.

Safi remembers seeing his parents packing up and leaving the house in a hurry. "We were forced to either leave our village or be slaughtered by Israeli forces. It's been 68 years since I was forced to leave my village, but I'll never forget the land of my ancestors." Still holding the keys of his long-gone home, Ahmed stressed: "The return to our land is the right of every Palestinian. If I die before going back to my village, my children or their children will eventually go back; we will never abandon our right to return."Message to the world

Every year in Bethlehem, dozens of Palestinians set out from the Dheisheh refugee camp heading to Jerusalem to mark "Nakba Day," which falls on May 15. "Nakba Day is a reminder to the entire world of our right to return to our lost villages and towns," said Monther Amira, who helped organize this year's Nakba Day activities. "It commemorates 68 years of Palestinian struggle and displacement. It's also a message that the new generation of Palestinians will never forget their ancestral homeland."

Mohamed Karam, a 25-year-old Palestinian from the Dheisheh refugee camp, told AA he dreams of returning to the home of his ancestors. "I will never give up my right to return to the city of Yaffa, from which my grandfather was driven 68 years ago."

Ameena Abdullah, 13, originally from a village near Jerusalem, has heard stories from her grandmother about her family's hometown of Lifta. "I've never seen or visited Lifta, but my grandmother's stories create a beautiful image of what it was like before the Nakba." Ameena went to assert that, even though she had not been born at the time of the expulsion, she too nevertheless had the right to return. "Someday I will go back to my village and build a new home there," she said. Echoing a common Palestinian sentiment, she added: "I will never give up my land."

Bassam al-Salhi, a member of the Palestine Liberation Organization, said this year's Nakba Day came amid an ongoing Palestinian "Intifada" (meaning "uprising"). "We will continue to resist the Israeli occupation until we free our land, establish an independent state and the refugees return to their homes. The right of return is a Palestinian legacy that cannot be waived."

Mohamed Alyan, who heads the Higher Commission for Commemorating Nakba Day, told AA that every year, the Palestinian people show that they will never forget the "Catastrophe." "Thousands of Palestinians hit the streets to mark the passage of 68 years since the Nakba," Alyan said, noting that both the young and the old had taken part in this year's Nakba Day activities across the West Bank. "Memories of the Nakba and the right of return are passed down from generation to generation."

The Israel-Palestine conflict began in 1917 when the British government, in the infamous "Balfour Declaration" from Lord James Balfour to Lord Rothschild, called for "the establishment in Palestine of a national home for the Jewish people," with the caveat that "nothing shall be done which may prejudice the civil and religious rights of existing non-Jewish communities in Palestine." In 1948, a new state - called "Israel" - was established inside historical Palestine. Around 15,000 Palestinians were killed, some 800,000 displaced, and 531 Arab villages destroyed in attacks by armed Jewish groups.

The Palestinian diaspora has since become one of the largest in the world. Palestinian refugees are now scattered across Jordan, Lebanon, Syria and other countries, while many have since settled in refugee camps in the Israel-occupied West Bank and the Israel-blockaded Gaza Strip.

According to the U.N. Relief and Works Agency (UNRWA), there are currently more than 5 million registered Palestinian refugees. For many Palestinians, the right to return to their homes in historical Palestine isn't just a key political demand, but a fundamental human right.
RELATED TOPICS