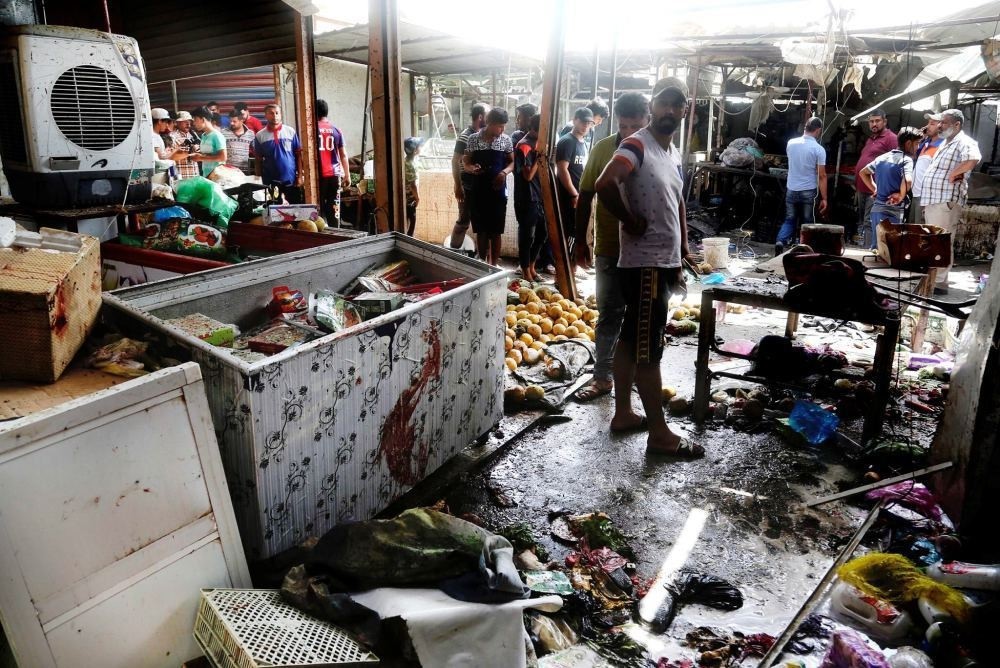 Iraqis inspect a market after a suicide bombing claimed by DAESH hit a crowded area in Baghdad.
by Compiled from Wire Services May 19, 2016 12:00 am

A U.S. commander has said DAESH turning to Iraqi capital, Baghdad can be considered the militant group is reverting to its roots after losing territory in Iraq due to recent operations

DAESH, on the defensive and under heavy pressure in Iraq, has struck back with bloody attacks in Baghdad, where persistent gaps in security increase the city's exposure. In doing so, DAESH can portray itself as still being on the offensive, draw attention away from the setbacks it has suffered, and obtain media attention unrelated to losses. The spike in Baghdad attacks, which have killed more than 200 people in city over the past seven days, also comes at a time of high political tension in the capital that affords militants an opportunity to sow further discord. Carrying out bombings is not a new strategy for DAESH it has been a key part of the militants' offensive and defensive tactics for years, and the group never fully stopped attacks in Baghdad. But DAESH's attention was increasingly focused outside Baghdad after it overran large areas north and west of the city in 2014, and attacks in the capital decreased. "Baghdad is now being targeted because the group is on the defensive and they can still hurt the government in their capital," said Patrick Skinner, a former CIA case officer who is now with The Soufan Group consultancy. "They still use (bombs) in assaults... But there's clearly some car and vest bomb makers in the Baghdad belt and in the capital, leading to the increased and likely sustained carnage," Skinner said. Colonel Steve Warren, the spokesman for the international operation against DAESH, cited militant battlefield setbacks as the primary motivation for the increase in Baghdad attacks. But he also said that DAESH may see political turmoil in the capital as "an opportunity they can try to exploit using truck bombs." The increase in attacks coincides with a political crisis over Prime Minister Haider al-Abadi's efforts to replace the current cabinet. The crisis has paralyzed the legislature for weeks, and demonstrators angered by lawmakers' lack of progress stormed parliament last month.

Similarly, a series of deadly attacks by DAESH operatives in and around Baghdad may be a sign that the militants are "reverting to their roots" as a terrorist organization, the top U.S. commander for the Middle East said Wednesday. Army Gen. Joseph Votel, the head of U.S. Central Command, said this does not mean DAESH has given up its ambition to create a so-called caliphate. But he said it marks a new turn in tactics aimed at diverting attention from the group's recent battlefield losses. Speaking to reporters while traveling to the Middle East, Votel said the attacks that have rocked Baghdad over the past week are an illustration of the dynamic nature of the war. "We have to respect our enemies and respect their ability to adapt and adjust on the battlefield," he said. "In this regard, some of the attacks we're seeing in Baghdad, I think we are seeing a manifestation of that. We are seeing them see opportunities and take advantage of those opportunities," he added. "I think they believe it will cause the Iraqi government to divert forces, divert effort, divert intellectual horsepower to solving those problems" as opposed to priorities like recapturing the DAESH stronghold of Mosul in northern Iraq. Now that DAESH has lost 40 percent or more of the terrain it once controlled in Iraq, "they may be reverting in some regards back to their terrorist roots," he said. Votel, who served in combat in both Iraq and Afghanistan, became head of Central Command two months ago after serving as commander of Special Operations Command. In his new post he oversees not only U.S. military operations in Iraq and Syria but across the greater Middle East, including in Afghanistan. His visit this week to the Middle East comes amid concern about political unrest in Baghdad and the slow pace of Iraqi military operations to recapture Mosul. Votel said he sees reason for "a little concern" about political paralysis that has gripped the Iraq government in recent weeks.

Meanwhile, a leading international rights group on Wednesday released a report documenting atrocities by Libya's DAESH affiliate, including instances of "crucifixions" and shooting a man to death for "cursing God", in the coastal city of Sirte, a stronghold of the militants. Human Rights Watch recounts "scenes of horror" that followed the city's seizure by DAESH militants in February 2015, with beheadings of dozens of residents accused of being spies or sorcerers. Men were flogged for acts such as smoking or listening to music, and fathers were ordered to "marry off their daughters" to the group's fighters as DAESH spread a wave of terror among the townspeople. The 41-page HRW report entitled "'We Feel We Are Cursed': Life under DAESH in Sirte, Libya," is based on interviews with 45 Sirte residents.
RELATED TOPICS