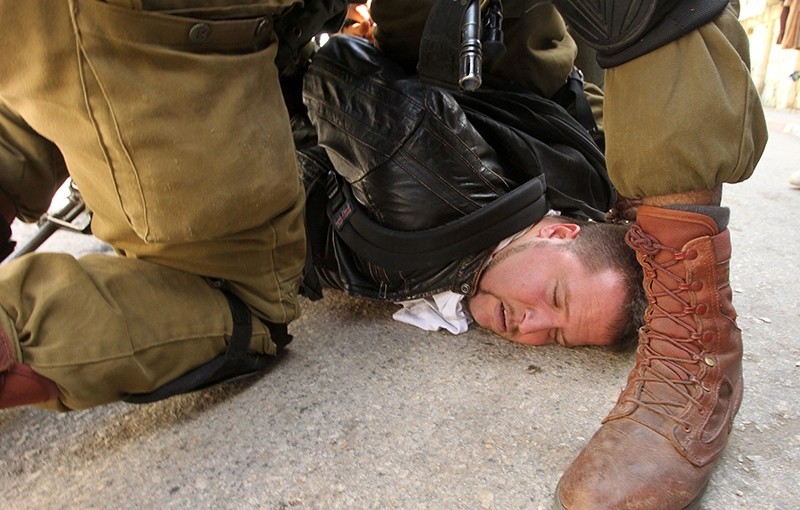 Israeli soldiers arrest an Israeli protester during clashes following a demonstration against Jewish settlements and the closing of al-Shuhada street on February 20, 2016 in the West Bank city of Hebron (AFP Photo)
by Associated Press May 25, 2016 12:00 am

A leading Israeli rights group said Wednesday it will stop seeking investigations of Israeli soldiers suspected of abusing Palestinians, arguing that internal military probes have failed to deliver justice and effectively help whitewash half a century of occupation.

In a rebuke to the military justice system, the Israeli group B'Tselem said military investigations are deeply flawed and create a "mere semblance of justice."

"The system's real function is cover-ups," he said. He said once the group reached that "painful conclusion ... we found it morally unacceptable for us to continue working in the same way."

The Israeli military said B'Tselem's stance was biased and did not reflect reality. In a statement Wednesday, it insisted the military was "committed to the rule of the law and its legal system acts with utmost professionalism and thoroughness."

The military said all its law enforcement decisions are subject to external review, including that of the attorney general and the Supreme Court. It said it would continue to investigate "any and all claims of misconduct, including those from B'Tselem."

B'Tselem said that since the late 1980s, it has demanded investigations in hundreds of cases, including of Israeli soldiers suspected of killing, injuring, beating or using Palestinians as human shields or damaging their property.

Since the outbreak of the second Palestinian uprising in 2000, B'Tselem has called for investigations in 739 cases, the group said.

B'Tselem said investigations have been slow and perfunctory and that soldiers' accounts are routinely accepted at face value, without supporting evidence.

The group was vague about what alternatives Palestinians now have, although El-Ad said it would still help Palestinians seek justice through other means.

"We will continue to investigate cases, interview witnesses, trying to collect data to the best of our professional ability and to publish that information to the public," he said.

"Whether that is going to be successful or not, time will tell," he added.