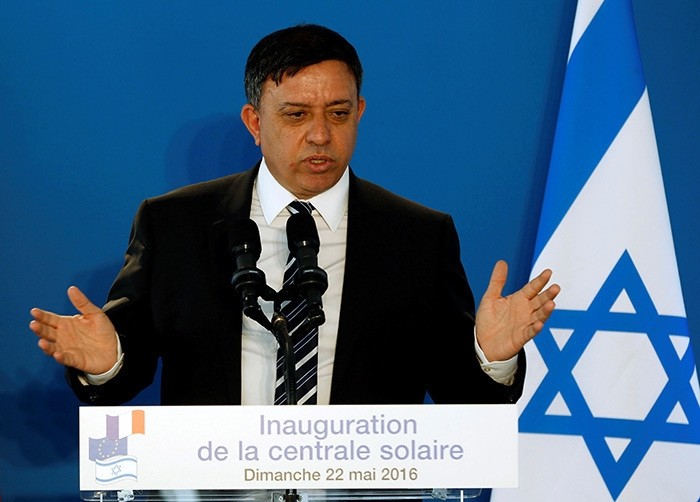 Israeli Environment Protection Minister Avi Gabbay delivers a speech near the southern Israeli city of Ashkelon May 22, 2016. (Reuters Photo)
by Daily Sabah with Agencies May 27, 2016 12:00 am

Israeli Prime Minister Benjamin Netanyahu suffered his second cabinet resignation in a week on Friday when a minister quit over the appointment of a hardline nationalist in the 'extremist government'. Environment Minister Avi Gabbay announced his resignation in a strongly worded statement that accused Netanyahu of putting the country on a path to ruin. Gabbay said that he was "unable to swallow" Netanyahu's decision to take the defense portfolio from former general Moshe Yaalon and hand it to Avigdor Lieberman, who has pledged harsh measures against Palestinian 'terrorists'. Yaalon resigned from the government a week ago in protest, warning of a rising tide of extremism in the party and the country as a whole. "I could not accept the removal of Yaalon, a professional and thoughtful defense minister," Gabbay said. "The country of course has the right to have a government of the right or left," he added. "But I do not think it is right... to form an extremist government." "We must stop the process which I fear will lead to our ruin." Gabbay, of the centre-right Kulanu party, is not a member of parliament and his resignation does not affect the ruling rightwing coalition's majority. Yaalon himself was quick to praise Gabbay for his stand. "In our politics, sticking to principles has become an object of ridicule, while U-turns and deceit are considered 'sophisticated'," he wrote on Twitter in Hebrew. "Full appreciation to Avi Gabbay who proves that another way is possible. One must not give up." Co-opting Lieberman and his Yisrael Beitenu party will add five lawmakers to Netanyahu's previously wafer-thin majority if the coalition deal is given parliamentary approval next week as expected.

In his announcement, Gabbay referred to the frosty relations between Netanyahu and U.S. President Barack Obama. "It wasn't easy for me being a member of this government... which completely messed up relations with the most important power in the world, which preserves our security interests," he said. The United States said Wednesday that the make-up of Israel's new right-wing coalition raises "legitimate questions" about the government's commitment to a two-state solution in its conflict with the Palestinians. In a rare comment on the internal politics of a U.S. ally, State Department spokesman Mark Toner said Washington had "seen reports from Israel describing it as the most right-wing coalition in Israel's history." "And we also know that many of its ministers have said they oppose a two-state solution. This raises legitimate questions about the direction it may be headed in and what kind of policies it may adopt." The spokesman also restated the United States' support for a negotiated end to the conflict between Israel and the Palestinians based on two states living side by side within agreed borders.

A May 20 dated Daily Sabah report said that Lieberman's appointment may undermine the ongoing restoration process of diplomatic relations between Israel and Turkey. "Lieberman is known for his harsh criticism of the Turkish-Israeli normalization process. Last year, Lieberman slammed Netanyahu, who phoned Recep Tayyip Erdoğan in March 2013 to apologize for the flotilla deaths, and stated, "It was a great mistake to apologize to Turkey." Lieberman added that as long as Turkey is ruled by the current leadership headed by President Erdoğan, there is no chance of mending ties with Israel," the report said.

In first remarks as Israel's designated defense minister, Lieberman joked about his fiery reputation: "I have undergone surgery to lengthen my fuse." In a more serious vein, the Soviet-born 57-year-old struck a conciliatory note, emphasizing "a strong commitment, to the peace, to the final status agreement (with the Palestinians)." Lieberman, who had a modest stint in Israel's armed forces, has in the past threatened to bomb Egypt's strategic Aswan dam and to assassinate Hamas leaders. He agitated Washington with his opposition to peace talks with Palestinians. Youssef Al-Mahmoud, a spokesman for the West Bank-based Palestinian Authority, said that by bringing in Lieberman, the Israeli government 'is mixing extremism with craziness'. The former foreign minister also angered the Israeli top brass, whom he will oversee, by joining protests last month against the court-martial of a soldier who shot dead an incapacitated Palestinian assailant.