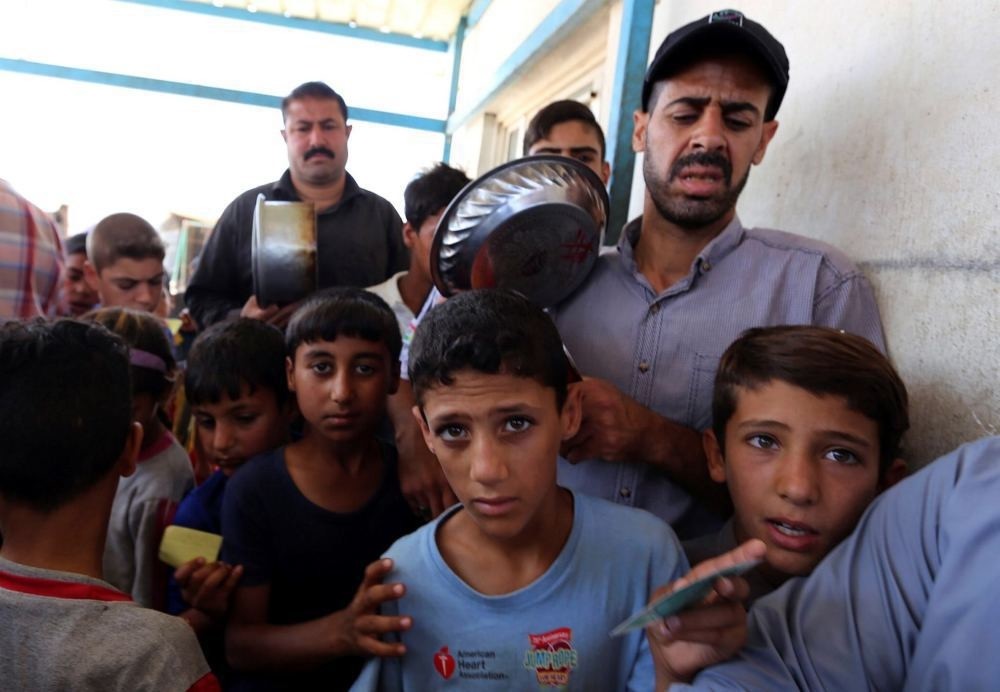 Thousands of Iraqis were displaced due to government forces and Iranian-backed Shiite militias fighting against DAESH.
by Compiled from Wire Services Jun 01, 2016 12:00 am

Iraqi forces battling their way into Fallujah repelled a four-hour attack by DAESH in the city's south on Tuesday, a day after first moving into the southern edges of the militant-held city with the help of U.S.-led coalition airstrikes. Also Tuesday, a leading aid group raised alarm over the unfolding "human catastrophe" in Fallujah, where an estimated 50,000 people remain trapped as the fight intensifies, and renewed calls on warring parties to open up safe corridors for civilians to flee. The attack started at dawn in Fallujah's Nuaimiya area where Iraqi troops captured around 85 percent of the ground the previous day, two officers with the special forces told the Associated Press. DAESH militants used tunnels, deployed snipers and sent six explosives-laden cars to hit the troops but they were destroyed before reaching their targets, the officers said, speaking on condition of anonymity to discuss the ongoing campaign. Iraqi forces suffered casualties, but the officers did not provide details.

DAESH militants are reported to be holding several hundred families as "human shields" in the Iraqi city of Fallujah while government forces close in, the United Nations refugee agency said on Tuesday, citing witness accounts. Some 3,700 people have fled Fallujah, west of Baghdad, over the past week since the Iraqi army began its offensive on the city controlled by militant forces, it said. "UNHCR has received reports of casualties among civilians in the city center of Fallujah due to heavy shelling, including 7 members of one family on the 28th of May (Saturday)," UNHCR spokesman William Spindler told a news briefing. "There are also reports of several hundred families being used as human shields by DAESH in the center of Fallujah."

The accounts come from displaced people who have spoken to UNHCR field staff, spokeswoman Ariane Rummery said. "Most people able to get out come from the outskirts of Fallujah. For some time militants have been controlling movements, we know civilians have been prevented from fleeing. There are also reports from people who left in recent days that they are being required to move with DAESH within Fallujah," she told Reuters.

Nuaimiya is a sprawling, mainly agricultural area in Fallujah's south and Monday's push into it was the first attempt by Iraqi forces to enter the city after focusing on dislodging the militants from surrounding areas to tighten the siege. Fallujah has been under DAESH control for over two years and is the last major city in western Iraq still under the control of the Sunni extremist group. The militants still control patches of territory in the country's north and east as well as the country's second largest city, Mosul. The U.S. led coalition and Iranian-backed Shiite paramilitary forces are helping the Iraqi army in the battle to retake Fallujah. But the fight is expected to be long and protracted, given that DAESH militants have had more than two years to dig in. Tunnels, similar to those found in other territory long held by DAESH, have already been discovered in the northeastern outskirts of Fallujah. The Iraqi counterterrorism forces are leading the assault on Fallujah, slowly moving up from the southern edge. Their advance is expected to be slow also because tens of thousands of civilians remain trapped in Fallujah and hidden bombs are believed to be strewn throughout the city, according to special forces commanders at the scene.

A statement from Jan Egeland, Secretary General of the Norwegian Refugee Council, warned of the impending humanitarian disaster inside Fallujah. "A human catastrophe is unfolding in Fallujah," Egeland said, adding that only one family managed to escape from the town on Monday. Since the offensive began a week ago, 554 other families have escaped from areas surrounding Fallujah, which lies 65 kilometers west of Baghdad. "Warring parties must guarantee civilians safe exit now before it's too late and more lives are lost," Egeland added. The NRC group, which is working with refugees and internally displaced people in Iraq, said lack of food, medicine, safe drinking water and electricity in the city "are pushing families to the brink of desperation." The extremist group is expected to increase attacks in major Iraqi cities in an attempt to distract the security forces' attention away from the front lines. On Monday, DAESH claimed responsibility for a wave of bombings in and around the capital, Baghdad, that killed at least 24 people and wounded dozens.
Last Update: Jun 01, 2016 12:14 pm
RELATED TOPICS