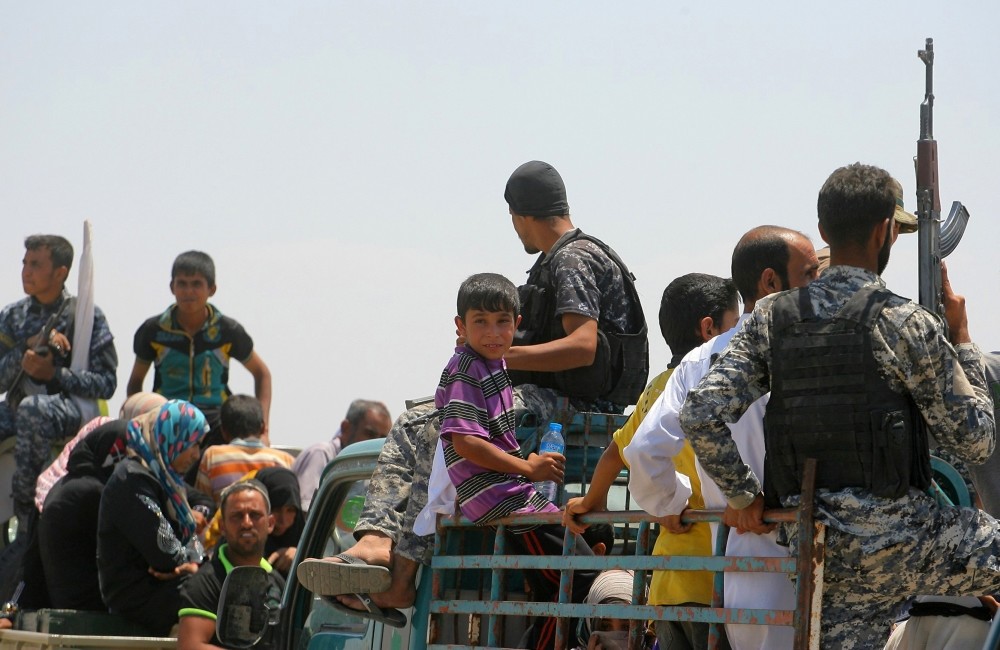 Families from Fallujah flee their homes during fighting between Iraqi security forces and DAESH during a military operation to regain control the city 65 kilometers west of Baghdad, June 1.
by Compiled from Wire Services Jun 03, 2016 12:00 am

Iraqi forces stalled on the outskirts of Fallujah, slowed in their advance Wednesday by concerns over trapped civilians and resistance from DAESH

The Iraqi military's advance into Fallujah was stalled Wednesday by fierce resistance from DAESH militants and concerns over protecting tens of thousands of civilians still trapped inside the strategic city, officials said.

With the operation in its second week, convoys of special forces could only inch forward on the dusty southern outskirts of the city as a handful of airstrikes sent up plumes of white smoke above clusters of low buildings on the fringes of the city's dense urban terrain.

More than 50,000 people are believed to be still inside Fallujah, and the U.N. estimated that 20,000 of them are children, warning that they face a dire humanitarian situation in addition to the risk of forced recruitment by the extremists.

Also, basic food goods have been in short supply for months and prices soared as the siege tightened. A kilo of sugar fetches $40, an amount very few remaining residents can afford. The water situation is equally bad in the city, which has not received any aid shipment since September 2015. Residents say they have not had safe drinking water in months. Men and boys ride to the Euphrates on bicycles every day to fetch water from the river for their neighborhood.

In a visit to the front line, Prime Minister Haider al-Abadi noted the slow pace and emphasized the priorities of the operation were protecting civilian lives and minimizing Iraqi casualties, but he praised the progress so far as a "remarkable advance."

Government troops will "hoist the Iraqi flag inside Fallujah in the coming few days," vowed al-Abadi, wearing the black fatigues of the counterterrorism force.

The operation to free Fallujah from the more than two-year grip of DAESH was launched May 22, and it involves the Iraqi special forces, militias consisting of mainly Shiite fighters, and U.S.-led airstrikes. Retaking the Sunni-majority city 65 kilometers west of Baghdad would represent a huge victory for the Iraqi government because Fallujah was one of the first major urban areas to fall to the DAESH extremists in 2014 and has been a bastion of support for militant anti-government sentiment in Iraq since the 2003 U.S.-led invasion.

"Today's offensive on Fallujah is different from the one the Americans fought in 2004," said Brig. Haider al-Obeidi. Unlike the insurgency that U.S. forces fought in Fallujah and elsewhere in Iraq, DAESH militants are operating like a conventional military in addition to carrying out suicide attacks and planting hidden bombs.

Progress against DAESH militants has been slow due to their intense resistance and the need to protect the civilians, said army Gen. Jalil al-Sharifi.

The prime minister, speaking from the main operations room at a sprawling military base just east of the center of Fallujah, said DAESH was using civilians as human shields, and the government was urging residents to leave via safe corridors or stay inside their homes. "The main goal of the military operation now is to reduce civilian and army casualties," al-Abadi said.

The fight for Fallujah is expected to be long and hard because DAESH has had more than two years to dig in and because of the dense urban setting. Once Iraqi forces are in the city center, calling in airstrikes will become more difficult due to the many civilians and the proximity of friendly forces, according to the U.S.-led coalition.

Lt. Gen. Abdul Ghani al-Asadi said he expects to find more sympathy among Fallujah's population for the Sunni-led militants of DAESH, which some estimates have put at 500-700 militants. That will make it harder to differentiate between friend and foe.

"Given the long period DAESH controlled the city and how DAESH runs the city, many of the population support them," al-Asadi said. Since the operation began, the United Nations said it has received reports that about 500 men and boys have been detained for questioning because they were identified as suspected DAESH sympathizers. Thousands of civilians have fled Fallujah's mostly rural outskirts over the past two weeks.

Iraqi forces have imposed a tight blockade on the city, and DAESH militants are reportedly preventing residents from leaving.

Estimating the number of children still in Fallujah at 20,000, UNICEF called on all parties to protect them and "provide safe passage to those wishing to leave the city." Such an arrangement is unlikely to happen because it would require negotiations between both sides.

The U.N. also said that violence in Iraq killed at least 867 people in May, an increase from the previous month. In its monthly report, the U.N. mission to Iraq said at least 468 civilians were among the dead, while the rest were members of the security forces. A total of 1,459 Iraqis were wounded last month, it said. In April, at least 741 Iraqis were killed and 1,374 wounded. The figures do not include casualties from Anbar province, which includes Fallujah. Baghdad was the worst affected in May, with 267 civilians killed and 740 wounded, mainly in bombings targeting security forces and the Shiite majority.

Fallujah is the last major urban area controlled by the extremist group in western Iraq. The militants still control Iraq's second-largest city, Mosul, as well as smaller towns and areas in the west and north.
RELATED TOPICS