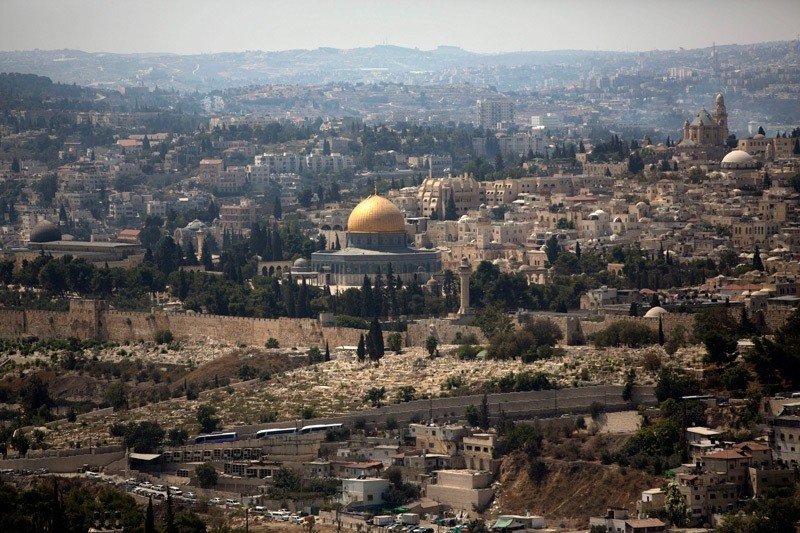 The Palestinian Wadi Hilweh Information Center said more than 200 Israelis entered the compound, known as the Temple Mount to Jews, and attempted to pray in contravention of an agreement on the site's status quo.

The Waqf media department, which manages the compound, said Israeli police barred dozens of Muslim worshippers from entering the mosque.

Sunday was the first time the Palestinian "Naksa" commemoration and Israel's Jerusalem Day have fallen on the same day due to the shifting Hebrew calendar. Both mark the capture of East Jerusalem by Israeli forces 49 years ago but in very different ways.

The possibility of the start of the Muslim holy month of Ramadan on Sunday evening also threatened to raise tensions.

Israeli police spokesman Micky Rosenfeld said Thursday that 2,000 officers would be deployed for an Israeli march that passes through the Old City's Muslim quarter and towards the Western Wall.

He emphasized that the march, which is expected to attract around 30,000 largely fervently nationalist youths, was a celebration rather than demonstration.

However, many view its route as inflammatory. Israeli newspaper Haaretz reported that a petition by Jerusalem-based Israeli human rights group Ir Amim for the procession to be rerouted was rejected by the High Court on Sunday.

Last month, the group published the results of a survey of Jewish Jerusalem residents that showed almost two-thirds believed the march should not pass through the Muslim quarter this year, given the potential clash with Ramadan.

Rosenfeld said the police planned for the march to have cleared the Damascus Gate, the Muslim quarter's main entrance, more than an hour before sunset, when Ramadan could start.

Palestinians in the occupied West Bank and Gaza Strip mark June 5 as the Naksa, or setback, they suffered when Israel occupied the territories. East Jerusalem had been controlled by Jordan and Egypt until the 1967 war.

In contrast, Israel's Jerusalem Day celebrates what it describes as the unification of Jerusalem, which had been divided since the creation of Israel in 1948.

Because of the Muslim lunar calendar, the start of Ramadan is dependent on moon sightings. If announced on Sunday evening, thousands of Muslims would celebrate in Jerusalem's Old City before heading to pray at Al-Aqsa Mosque, close to the Israeli congregation at the Western Wall.