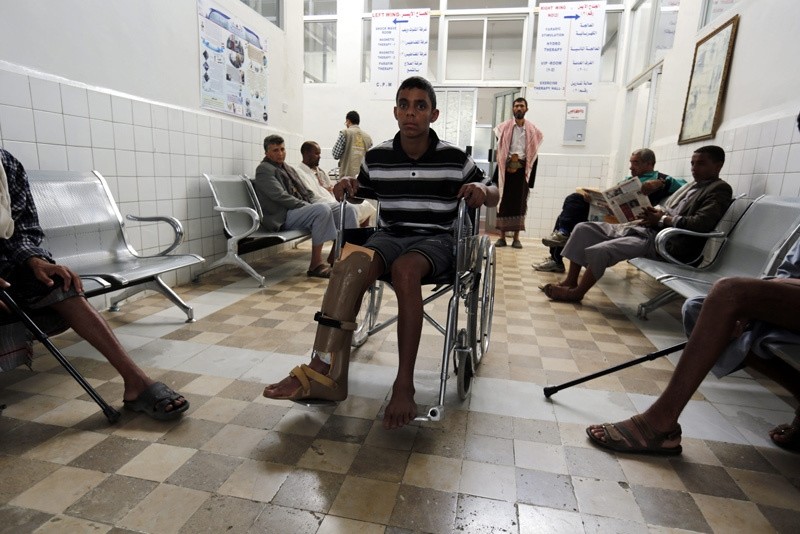 A disabled young Yemeni of the on-going conflict victims (C) waits for treatment at a rehabilitation center on International Day of Innocent Child Victims of Aggression, in Sanau2019a, Yemen, June 4, 2016 | EPA Photo
by Anadolu Agency Jun 05, 2016 12:00 am

"Government delegates agreed with U.N. experts to suspend direct talks and to hold indirect discussions in an effort to bridge the gap between the two sides," the source told Anadolu Agency.

In April, the Yemeni government and the Houthis and their allies engaged in U.N.-sponsored talks in Kuwait aimed at resolving the one-year conflict.

Sources close to the two sides said earlier that they had agreed to exchange prisoners before the start of the Muslim holy month of Ramadan, due to start this week.

According to the source, the Yemeni government wants the Houthis to release all prisoners named in UN Security Council resolution 2216, including Defense Minister Mahmud al-Subeihi.

The government says the Houthis want to swap only "prisoners of war" and refuse to release all prisoners named in the U.N. resolution, which calls on the Shia group to lay down their arms and withdraw from cities they currently occupy.

Meanwhile, a source close to the Houthis accused the government of not being serious about reaching an agreement on a prisoner swap.

The source claimed the government had presented a list of just 137 prisoners out of 3,700.

Yemen has been racked by chaos since late 2014, when the Houthis and forces loyal to former President Ali Abdullah Saleh overran the capital Sana'a and several other parts of the country.

The move forced President Abd Rabbuh Mansour Hadi and his Saudi-backed government to flee to Riyadh.

In March last year, Saudi Arabia and its Arab allies launched a military campaign in Yemen aimed at reversing the Houthi gains and restoring Hadi's government.

According to U.N. figures, the conflict has led to the deaths of approximately 6,400 to date and forced 2.5 million to flee their homes.