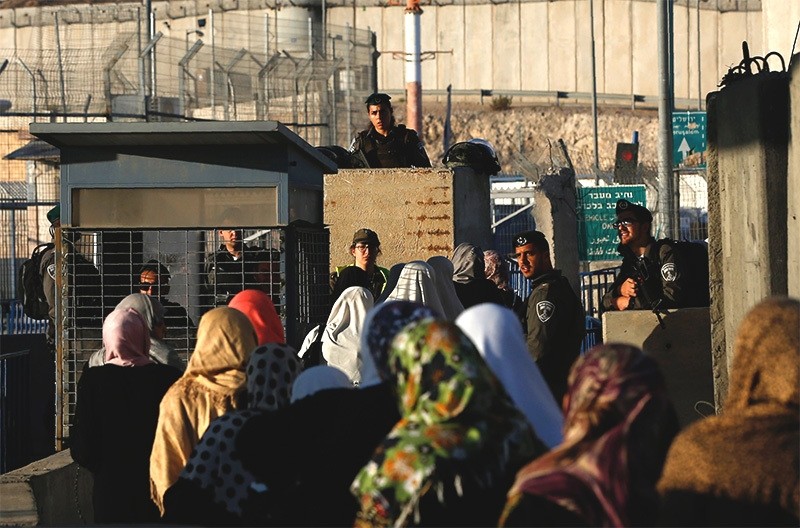 Palestinian women wait to cross through the Qalandia checkpoint near the West Bank city of Ramallah June 10, 2016, as they head to Jerusalem's Al-Aqsa mosque for the first Friday prayer of the holy Muslim fasting month of Ramadan. (AFP Photo)
by Jun 10, 2016 12:00 am

Israel's cancellation of entry permits for Palestinians following a deadly attack in Tel Aviv may amount to collective punishment, which is banned under international law, the United Nations' top human rights official said on Friday.

The Israeli military on Thursday revoked permits for 83,000 Palestinians to visit Israel and said it would send hundreds more troops to the occupied West Bank after a Palestinian gun attack that killed four Israelis in Tel Aviv.

U.N. High Commissioner for Human Rights Zeid Ra'ad Al Hussein condemns the attack but is deeply concerned about the revoking of permits "which may amount to prohibited collective punishment and will only increase the sense of injustice and frustration felt by Palestinians", spokeswoman Ravina Shamdasani told a news briefing.

Measures included the suspension of 204 work permits of individuals in the alleged attackers' extended families and the sealing off of their entire home town by Israeli security forces, she added.

"Israel has a human rights obligation to bring those responsible to account for their crimes. And this it is doing. However the measures taken against the broader population punish not the perpetrators of the crime, but tens - and maybe hundreds of thousands of innocent Palestinians," Shamdasani said.

The entry permits had been issued to Palestinians from the Israeli-occupied West Bank to visit relatives during the Muslim holy month of Ramadan now in progress.