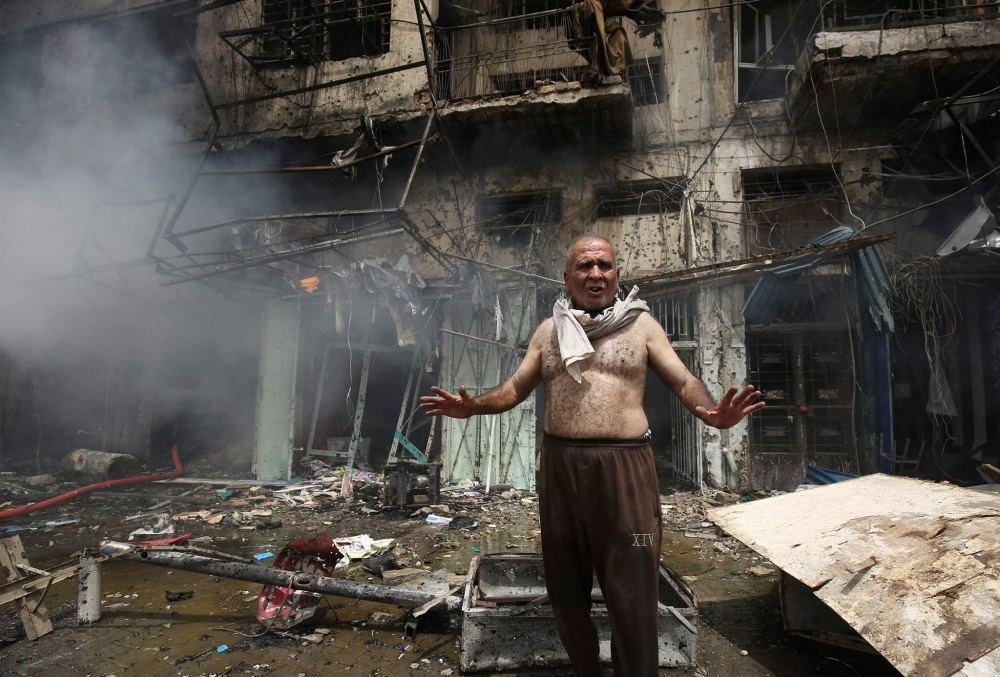 An Iraqi man shouts after a bomb destroyed his home in Baghdad.
by Compiled from Wire Services
Jun 10, 2016 12:00 am

Two suicide attacks have left at least 27 dead in Baghdad as government forces along with Iran-backed Shiite militias try to enter Fallujah, a DAESH stronghold. The militant group has increased attacks in Baghdad after losing ground in the country

Two suicide attacks in and around the Iraqi capital on Thursday killed at least 27 people and wounded dozens, officials said. The deadliest attack took place in a commercial area of a majority Shiite neighborhood in Baghdad. At least 15 civilians were killed and 35 wounded, police said. Another suicide bomber rammed his explosives-laden car into an Iraqi army checkpoint north of Baghdad, killing at least 12 people, police said. Seven civilians and five troops were killed in the attack in the town of Taji, about 20 kilometers north of the capital, a police officer said. At least 28 people were wounded, he added. Medical officials confirmed the casualty figures. All officials spoke on condition of anonymity as they were not authorized to brief the media. In an online statement, DAESH claimed responsibility for the attack in the New Baghdad neighborhood, saying it targeted Shiite militia members. It later claimed responsibility for the Taji bombing in a second online statement, saying it was targeting the Iraqi army. The Associated Press could not verify the authenticity of the statements, but they were posted on a militant website commonly used by the extremists.

The militant group often targets Iraq's Shiite majority, security forces and government officials. Baghdad has seen near-daily attacks in recent weeks. The deadly attacks in the capital and beyond are seen by Iraqi officials as an attempt by the militants to distract the security forces' attention from the front lines. The attacks came a day after Iraqi special forces pushed into the DAESH-held city of Fallujah in a large-scale military operation launched last month. Fallujah, which is about 65 kilometers west of Baghdad, is one of the last major DAESH strongholds in western Iraq. The extremist group still controls territory in the country's north and west, as well as Mosul, Iraq's second largest city.

Iraqi Prime Minister Haider al-Abadi expects two victories from the battle underway in Fallujah. The first is over DAESH, the second over political rivals, including some backed by Iran. Retaking Falluja before parliament returns from Ramadan in mid-July would enable Abadi to consolidate his leadership, allies and political analysts said. It would also clear the path for the Iraqi army to march on the northern city of Mosul, with a view to capturing DAESH's Iraqi 'capital' this year. A prolonged battle for Fallujah on the other hand would erode Abadi's ability to end a political crisis over measures to fight graft. This would open the way for rivals to challenge his rule - and delay the U.S-backed campaign to defeat DAESH. "The stakes are high for the prime minister and for the campaign on DAESH," said Baghdad-based security analyst Hisham al-Hashimi. "There is an undeclared deadline by which he needs to finish with Falluja, and that's when parliament reconvenes," said Hashimi.

The battle that Abadi started in Falluja on May 23 has allowed him to shift the focus domestically away from a crisis that unfolded when he failed to push through a cabinet reshuffle he sought as part of his drive to fight corruption. Abadi, a moderate Shiite politician, was elected two years ago on promises to curb corruption, defeat DAESH and to mend a rift with the Sunni minority. Demonstrations held in support of his reforms by followers of Shiite cleric Moqtada al-Sadr turned violent. Since April, protesters have twice stormed the Green Zone district that houses government offices, parliament and embassies. "Instead of fighting in the Green Zone, he (Abadi) chose to fight in Falluja," said Hassan Hassan.

The fear, Hassan said, is that a stalled battle in Falluja will undermine the battle for Mosul or take a sectarian turn with the involvement of Shiite militias. The collapse of the Iraqi army when DAESH pushed into Mosul in June 2014 left Abadi reliant for ground troops on Shiite militias, known as Hashid Shaabi, or Popular Mobilization. These were trained and influenced by Iran. But as the army has gained strength over the past year, it has led offensives on the insurgents, recapturing Ramadi, the capital of Sunni Anbar province, west of Baghdad. Shiite militias resent seeing their role diminished. The government official said the battle inside the city of Falluja had been assigned to elite army units, with Sunni tribal fighters following behind to hold the ground. The Hashid, he said, should stay on the outskirts enforcing the encirclement and as back up.

Abadi has been keen to defuse sectarian tension as Sunni politicians have voiced alarm that the Shiite militias would seek to settle scores with the population of the city. He has pledged to punish those who commit "violations" against civilians. He said the offensive had slowed down to protect those who remained in the city, estimated by the United Nations at 90,000. The United Nations said on Tuesday said there were "extremely distressing, credible reports" of men and boys executed and abused after fleeing Falluja into territory controlled by government forces and their Shiite militia allies. People who managed to escape said they lived on stale dates for months as they could no longer afford to buy supplies under insurgent control. Between 500 and 700 fighters are in Falluja, according to a U.S. military estimate. The Shiite militias say their number is closer to 2,500. Abadi is trying to stay the course in his policy of building bridges with Iraq's Sunnis and Sunni Arab neighboring states. He is trying to distance Baghad from the struggle for regional supremacy between Shiite Iran and Sunni Saudi Arabia. After Iranian Major General Qassem Soleimani, the commander of the Quds Brigade, showed up near Falluja visiting Iraqi allies, for example, Abadi sent ministers on a tour of Arab nations to allay their concern. Foreign Minister Ibrahim al-Jaafari, a Shiite, visited Cairo and Amman with a senior Iraqi Sunni cleric, Abdul Latif Humayim, in a show of national unity.