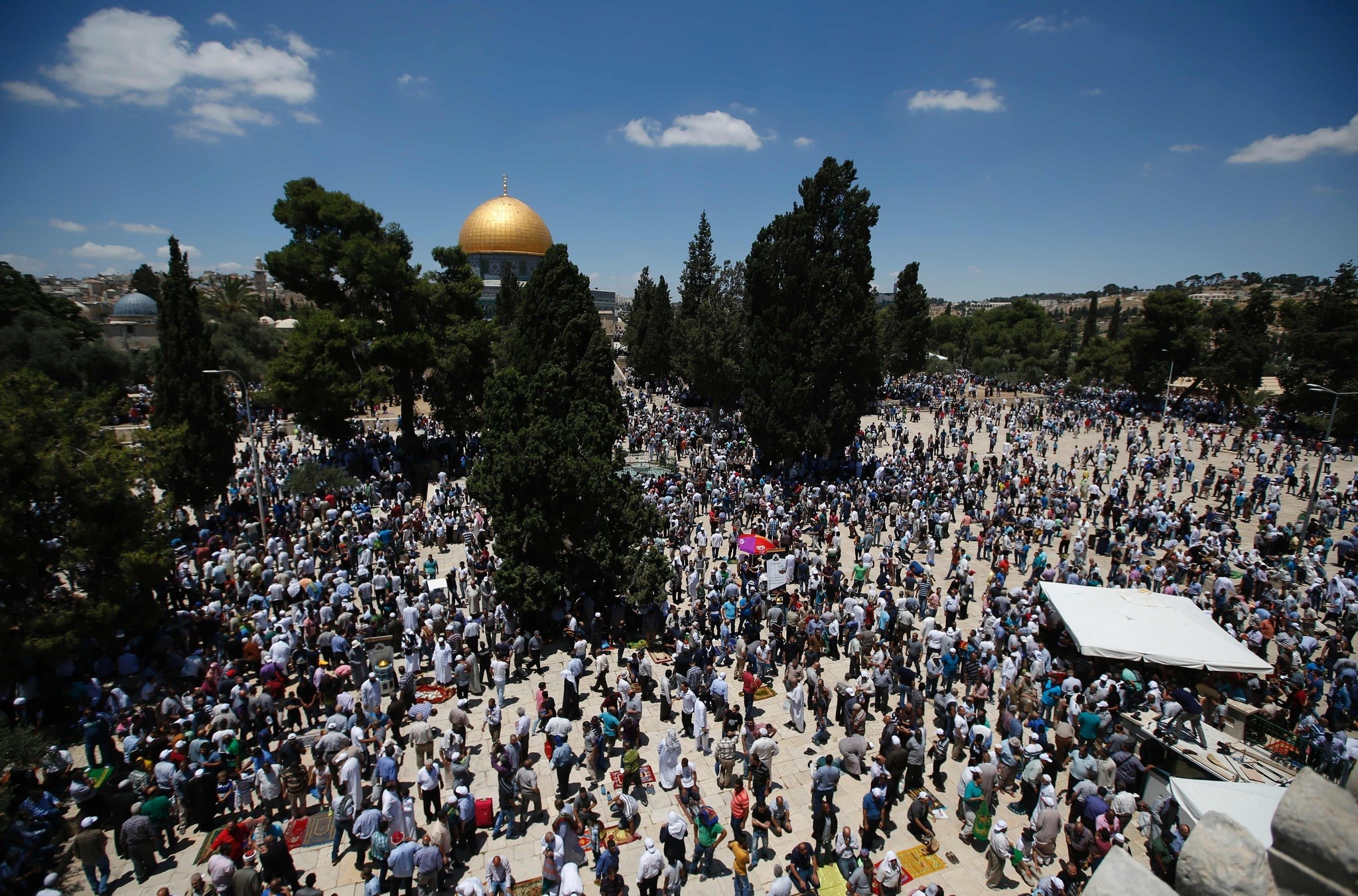 Palestinians pray in front of the Dome of the Rock at Jerusalem's Al-Asqa mosque compound during the first Friday prayers of the holy Muslim fasting month of Ramadan on June 10, 2016. (AFP Photo)
by Anadolu Agency Jun 10, 2016 12:00 am

Thousands of Palestinians from the occupied West Bank and East Jerusalem marched to the Al-Aqsa Mosque today to perform the first Friday prayer of the Ramadan holy month.

Men over 45, children under 12 and women of all ages were allowed by the Israeli army to enter occupied East Jerusalem without entry permits.

"Due to Israeli security measures, I spent three hours at an army checkpoint to enter Jerusalem," Ahmed Barakat, 55, from the West Bank city of Hebron (Al-Khalil) told Anadolu Agency.

"It's the first time I've been in the city since last Ramadan," he said.

"I will perform Friday prayers at the Al-Aqsa Mosque, but I also hope to perform Taraweeh [Ramadan evening] prayers here," he added.

The Israeli authorities have stepped up security around the flashpoint religious site, deploying some 3,500 policemen and erecting roadblocks at the entrances of Jerusalem's Old City.

Sheikh Omar al-Qiswani, the Al-Aqsa Mosque's Palestinian director, told Anadolu Agency that only about 100,000 worshipers had prayed at Al-Aqsa on the first Friday of Ramadan, compared to some 250,000 last year.

"The [Jordan-run] Religious Endowments Authority has distributed hundreds of umbrellas for worshipers who will stay and have Iftar [i.e., break the Ramadan sunrise-to-sunset fast] inside the mosque compound," he said.

"We were expecting about 300,000 visitors for the first Friday of Ramadan, but Israeli security measures have prevented that," he added.

On Thursday, the Israeli authorities suspended entry permits into Jerusalem for around 85,000 Palestinians from the occupied West Bank and the blockaded Gaza Strip following a deadly shooting attack in Tel Aviv one day earlier in which four Israelis were killed.

The Israeli army also announced that a general closure would be imposed on the occupied Palestinian territories until midnight Sunday.

"I have a permit to enter Jerusalem for Ramadan, but the Israeli army stopped me at the Qalandia checkpoint," Sameer Malki, 37, from the West Bank city of Ramallah, told Anadolu Agency.

"This month [Ramadan] is our only chance to visit the Al-Aqsa Mosque and see the Old City of Jerusalem," he said.

The Al-Aqsa Mosque is sacred to both Jews and Muslims, and for the latter represents the world's third holiest site. Jews refer to the area as the "Temple Mount," claiming it was the site of two Jewish temples in ancient times.

Israel occupied the West Bank and East Jerusalem during the 1967 Middle East War. It later annexed the entire city in 1980, claiming it as the capital of the Jewish state -- a move never recognized by the international community.

International law continues to view the West Bank and East Jerusalem as "occupied territories" and considers all Jewish settlement building on the land to be illegal.