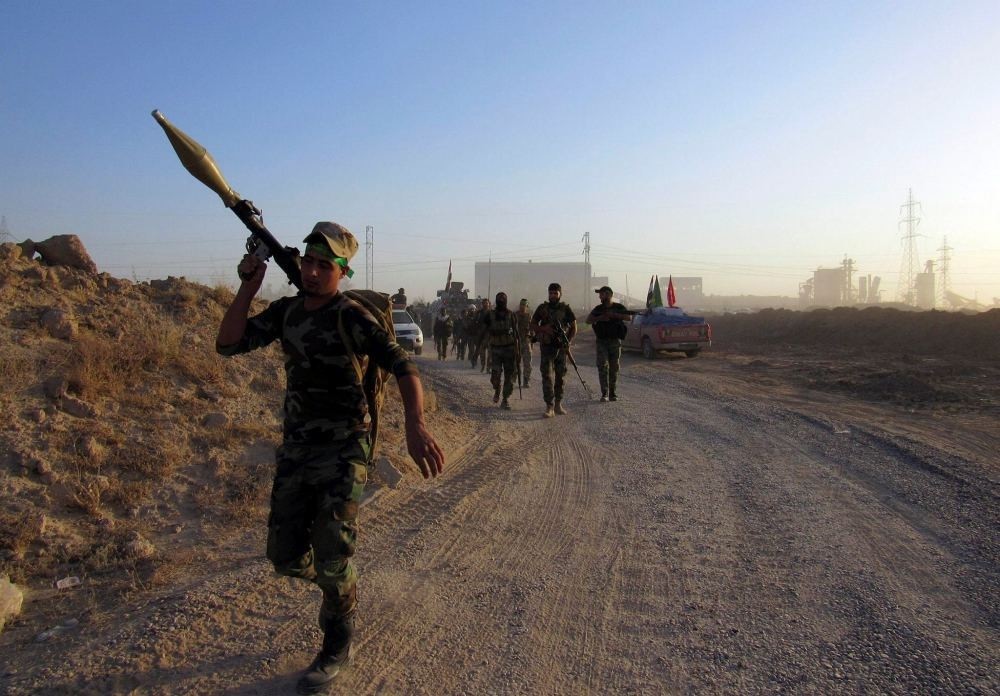 Iraqi Shiite militiamen are accused of killing Sunnis as the sectarian rift is escalates in Iraq.
by Compiled from Wire Services Jun 14, 2016 12:00 am

With thousands of civilians trapped in Fallujah with DAESH charging $130 each to leave, Iran-backed Shiite militants fighting alongside Iraqi forces have been accused of killing Sunnis

Iraq is investigating allegations that Shiite militiamen helping the army retake Fallujah have executed dozens of Sunni Muslim men from the city held by DAESH. The authorities "are following up on the violations and a number of arrests have been made," government spokesman Saad al-Hadithi said on Monday after a regional governor said 49 Sunni men had been executed after surrendering to a Shiite faction. Suhaib al-Rawi, governor of Anbar province where Falluja is located, said on Sunday that 643 men had gone missing between June 3 and June 5, and "all the surviving detainees were subjected to severe and collective torture by various means." The participation of militias in the battle of Fallujah, just west of Baghdad, alongside the Iraqi army had already raised fears of sectarian killings. Falluja is a historic bastion of the Sunni insurgency against U.S. forces that toppled Saddam Hussein, a Sunni, in 2003, and the Shiite-led governments that followed. "Strict orders were issued to protect the civilians," government spokesman Hadithi said, adding that these instructions were also given to the Hashid Shaabi, or Popular Mobilisation Forces, the coalition of mostly Shiite militias backed by Iran which are involved in the fighting.

The United Nations said last week it knew of "extremely distressing, credible reports" of men and boys being abused by armed groups working with security forces after fleeing Falluja. Iraqi authorities routinely separate males aged over 15 from their families when they manage to escape Falluja, to screen them to ensure they do not pose a security risk and check if they may have been involved in war crimes. U.N. human rights chief Zeid Ra'ad al Hussein said that screening was legitimate but should not be done by paramilitary groups. Civilians from Falluja had suffered "two and a half years of living hell" under DAESH and faced not just enormous danger in escaping but also "double jeopardy in the form of serious human rights violations," Zeid said. A spokesman for the U.S.-led coalition fighting DAESH said the Baghdad government was aware of the abuses. "We know that the prime minister has come out and said that he believes that these abuses have happened and that he ... has demanded accountability of any perpetrators," Colonel Chris Garver said. "We think that is the right course of action." The Iraqi army launched the offensive on Falluja on May 23, with air support from the U.S.-led coalition. The United Nations has said up to 90,000 people are trapped in the city with little food or water. Repeated phone calls to three spokesmen of the Popular Mobilization Forces were not answered. Last week, one of them, Kareem Nuri, said past accusations of human rights violations were "politically motivated and baseless".

More than 4,000 people have fled Fallujah , an aid group said on Monday. Along with roadside bombs planted by the militants, an estimated number of 50,000 civilians who remain trapped inside Fallujah, located about 65 kilometers west of Baghdad, have slowed down the Iraqi forces' operation to recapture the city. The Norwegian Refugee Council, which works with refugees and internally displaced Iraqis, said the 4,000 who fled since Saturday bring the total number of residents who escaped Fallujah since the Iraqi offensive started in late May to 27,580. Thousands more are expected to take the risky journey in the coming hours, NRC said, adding that some refugees reported DAESH militants were demanding 150,000 Iraqi Dinars, or around $130, from each person to let them leave. The aid group warned that humanitarian resources are running low and called for at least $10 million for a six months' supply of water, food and basic necessities. "Thousands of others remain trapped inside and the most vulnerable will need urgent assistance," said NRC Country Director in Iraq Nasr Muflahi. On Sunday, the Iraqi command announced that key areas to the west of Fallujah have been taken and that Iraqi forces pushed deeper into the city from its southern edges. U.S.-trained Iraqi counterterrorism forces, wary of coming street battles in the city, are already facing fierce resistance on the outskirts from well-entrenched militants.
RELATED TOPICS