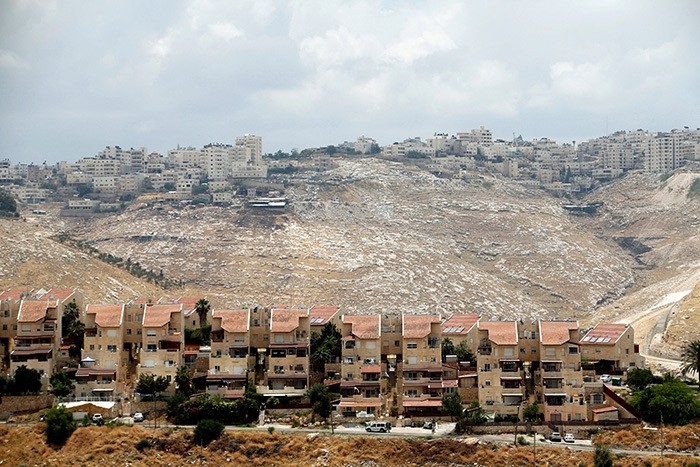 Houses are seen in the West Bank Jewish settlement of Maale Adumim as the Palestinian village of Al-Eizariya is seen in the background May 24, 2016. (Reuters Photo)
by Jun 15, 2016 12:00 am
Israeli municipal authorities on Wednesday approved the construction of a three-storey residential building for Jewish settlers in a Palestinian neighbourhood of East Jerusalem.

Hundreds of Jews, armed or protected by Israeli security forces, already live among 50,000 Palestinians in the Silwan neighbourhood. Pro-settlement groups have been seeking to reclaim property there that was under Jewish ownership in the 19th century.

"This government is moving forward to implement its programme to bring Israeli settlers and settle them in the place of the Palestinian residents to change the demographic situation in the Holy City," Abu Yousef told Reuters.

Israel captured East Jerusalem in a 1967 war and considers all of Jerusalem its indivisible capital, a claim that has not won international recognition.

Palestinians want East Jerusalem as the capital of a state they seek to establish in the occupied West Bank and Gaza Strip, and fear that Israeli settlements - regarded by most countries as illegal - will deny them a viable country.

Israel's anti-settlement Peace Now group said Palestinians who live next to the site where the new dwelling is to be built plan to appeal against city hall's move. The plot was previously administered by an Israeli government agency which sold it to settlers.

In a statement after the building permit was issued, the Jerusalem municipality said the city was "united and any resident can live wherever he or she pleases".

The United States and many other countries have urged Israel not to expand Jewish settlement on land Palestinians want for a state.