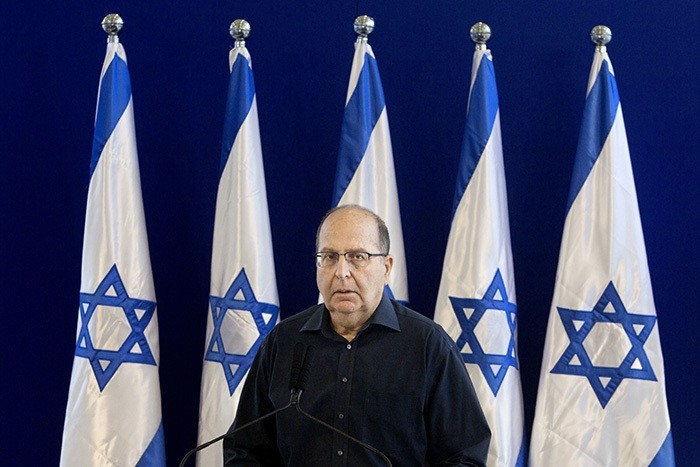 Israel's newly resigned defense minister said Thursday he will challenge Prime Minister Benjamin Netanyahu in the country's next election, accusing the Israeli prime minister of scaring the public with exaggerated security threats and allowing a "radical minority" to take over the government. With his comments, Moshe Yaalon completed his transformation from one of Netanyahu's closest and most trusted advisers into one of his most serious challengers.

Yaalon, a former military chief, was forced to resign last month after Netanyahu expanded his coalition government and offered the defense post to Avigdor Lieberman, a firebrand leader of a hardline nationalist party. Netanyahu and Yaalon have been at odds following a series of disagreements between political hardliners and military leaders.

In his first major address after stepping down, Yaalon accused Netanyahu of using scare tactics to exaggerate regional threats against Israel and caving in to extremists.

"Knowing the strategic situation of Israel in detail, and the military's power and capabilities, I can say that today and in the foreseeable future there is no existential threat on the state of Israel," Yaalon said.

"Therefore, it is expected of the leadership to stop scaring the citizens of Israel and giving them the sense that we are on the brink of a second Holocaust," he added, speaking on Thursday at the Herzliya Conference, an annual gathering of the military and political elite.

"What I am worried about are the cracks in Israeli society, and the breaking down of fundamental values," Yaalon said.

He accused the government of tolerating incitement against judges and said that the "violent and racist discourse of a radical minority" has infiltrated the mainstream and the country's leadership and threatens "to roll us down to the abyss." Israel "needs change," he said, adding that he will seek the prime minister's job in the next elections, which are to take place by 2019.

One high-profile dispute saw Yaalon and top military brass strongly condemn a soldier who was caught on video shooting a Palestinian assailant in the head as he lay on the ground posing no apparent threat.

Far-right politicians and protesters defended the soldier, who is currently facing a military trial for manslaughter. Yaalon was replaced as defense minister by Avigdor Lieberman, a hardliner who has spoken of harsh actions against Palestinian "terrorists." Yaalon was seen as a counterweight to religious nationalists, who hold key positions in Netanyahu's right-wing cabinet, though he has in the past voiced opposition to a Palestinian state.

He did not say whether he would challenge Netanyahu for the leadership of the ruling Likud Party or join a new party to press his campaign. Netanyahu accused Yaalon of contradicting his recent opinions, expressed while the former defense minister was still in office.

"It is impossible to express full confidence in the leadership when you are inside and to say the absolute opposite when you're outside," Netanyahu said. "True leadership doesn't deny threats," the premier added. "It sees them and prepares to deal with them and that is exactly what we will continue to do."

Separately, Ehud Barak, a former prime minister, also gave a speech Thursday, calling for Netanyahu's ouster. Barak, who is now out of politics, said an "extreme ideology" has taken over Netanyahu's Likud Party and that instead of pursuing peace with the Palestinians it is leading Israel toward a "one-state" reality in which Israel becomes an apartheid-like country or a "binational state" with a Jewish minority. "I call upon the government to come to its senses and get back on track," he said. "If not, all of us, yes, all of us, must get out of our seats and topple it through grassroots demonstrations and the ballot box before it's too late."
Last Update: Jun 17, 2016 4:36 pm
RELATED TOPICS