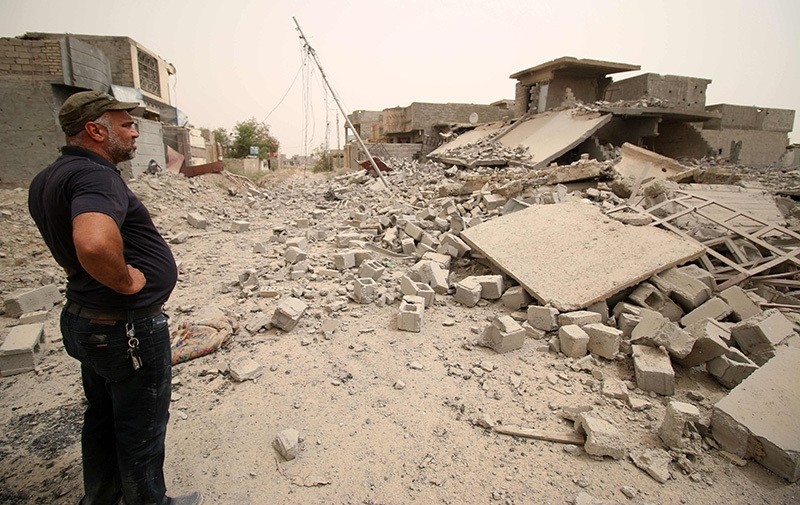 A member of the Iraqi counter terrorism forces inspects collapsed buildings in Fallujah's southern Shuhada neighbourhood after Iraqi govu2019t forces retook the area from Daesh on June 18, 2016 (AFP Photo)
by Jun 18, 2016 12:00 am

Government troops cleared two villages and pressed around 20 kilometres (12 miles) along a desert route west of Baiji, the first advance past the town since its recapture in October, the security officials said.

Defence Minister Khaled al-Obaidi said the assault marked the launch of operations to push Daesh out of Qayara, about 115 km (70 miles) north of Baiji, where an airfield could serve as the staging ground for a future offensive on Mosul, a further 60 km north.

Army troops on a separate front pushing west from Makhmour for the past three months have made only halting progress on the opposite side of the Tigris river.

"The launch of operations to liberate Qayara will not give the terrorists a chance to catch their breath," Obaidi said on Twitter alongside a picture of Humvee military trucks snaking down a desert road.

Iraqi forces entered the center of Fallujahh, an hour's drive west of Baghdad, on Friday morning after a four-week operation that sent its tens of thousands of residents fleeing to overwhelmed displacement camps nearby.

Prime Minster Haider al-Abadi had declared victory over the militants by evening, but police sources said on Saturday that government troops had not yet entered seven northern districts held by Daesh and were still clearing southern areas.

Iraqi troops engaged the insurgents on Baghdad Street, the main east-west route through Fallujah, firing rockets at their positions and taking sniper fire and mortar rounds.

Counter-terrorism forces took control of Fallujah hospital, a nest for the militants who set fire to large parts of it before fleeing, and were clearing the eastern al-Dhubat neighbourhood, a military statement said.

Live footage broadcast on state television from outside the hospital showed smoke rising from the hospital and elite commandos celebrating with an Iraqi flag.

The International Organization for Migration said on Saturday more than 81,000 people had been displaced by the fighting in Fallujah, which had a population about three times that size before the Daesh seizure in early 2014.