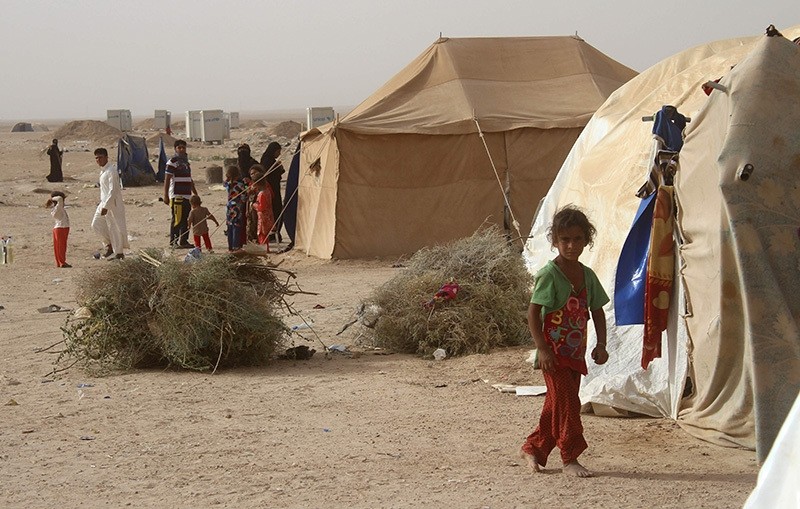 Displaced Iraqis from the embattled city of Fallujah stand outside tents where they are taking shelter some 18 kilometres from Ramadi on June 18, 2016. (AFP Photo)
by Jun 19, 2016 12:00 am

Fighting in the Iraqi city of Fallujah has displaced at least 30,000 people in three days, the Norwegian Refugee Council said Sunday, warning that a humanitarian disaster was unfolding.

Iraqi forces achieved a breakthrough on Thursday, taking over the center of Fallujah while the Daesh group retreated to areas in the north of the city.

That allowed thousands of civilians who had been used as human shields to flee the city, a key Daesh stronghold west of Baghdad that had been besieged for months.

"The estimated total number of displaced from Fallujah in just the last three days is now at a staggering 30,000 people," the NRC said in a statement.

The aid group, which runs displacement camps around Fallujah, said another 32,000 people had already been displaced since the start of the government offensive against the Daesh bastion nearly a month ago.

It said it believed dozens of families were still inside Fallujah, including the most vulnerable civilians such as pregnant women, the sick and the elderly.

The aid community has been overwhelmed by the influx of people and many were sleeping in the open, in the scorching summer sun and waiting for a tent at one of the displacement camps.

"We implore the Iraqi government to take charge of this humanitarian disaster unfolding on our watch," NRC's Iraq director Nasr Muflahi said in the statement.

NRC said it could no longer provide the required assistance, with water rations drying up fast.

It cited the case of a newly-opened camp in Amriyat al-Fallujah that houses 1,800 people but has only one latrine for women.

"We need the Iraqi government to take a leading role in providing for the needs of the most vulnerable civilians who have endured months of trauma and terror," Muflahi said.

Fallujah was the first city to fall out of government control in January 2014, as the Daesh began to establish a foothold on parts of the country.

Around 3.4 million people have since been forced from their homes by conflict across the country. More than 40 percent of them are from Anbar, the province in which Fallujah is located.