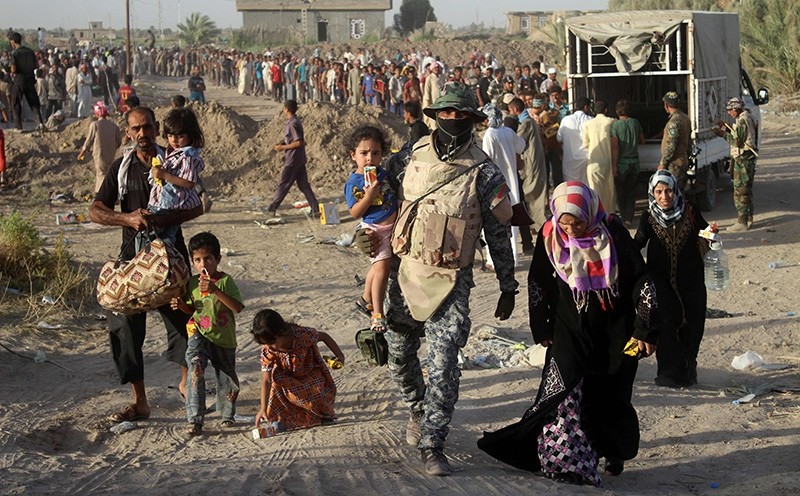 A displaced Iraqi family arrives at a safe zone on June 17, 2016 in Amiriyiah al-Fallujah, after Iraqi government forces evacuated civilians from the city of Fallujah (AFP Photo)
by Anadolu Agency Jun 20, 2016 12:00 am

More than 12,000 Iraqi families have fled Fallujah since last month as fighting rages on between Iraqi forces and Daesh terrorists in the western city, an Iraqi official said in a statement Monday.

"Around 12,219 families have been displaced from Fallujah and Saqlawiyah city [near Fallujah]," Ministry of Migration and Displacement official Amer Abbas said.

On May 22, the Iraqi army -- backed by U.S.-led coalition airstrikes -- launched an offensive to recapture Fallujah, which was overrun by Daesh in January 2014.

On Friday, Prime Minister Haider al-Abadi declared victory in Fallujah after Iraqi forces managed to recapture most of the city from Daesh following weeks of fighting.

However, the conflict is still ongoing on the outskirts of the city.

On Sunday, the UN said some 80,000 people have fled Fallujah since the Iraqi army launched the offensive to retake the city from Daesh last month.

Iraq has suffered a security vacuum since mid-2014, when Daesh captured the northern city of Mosul and overran large swathes of territory in the northern and western parts of the country.

According to the UN, more than 3.4 million people are now displaced in Iraq, more than half of them children, while over 10 million are in desperate need of humanitarian assistance.