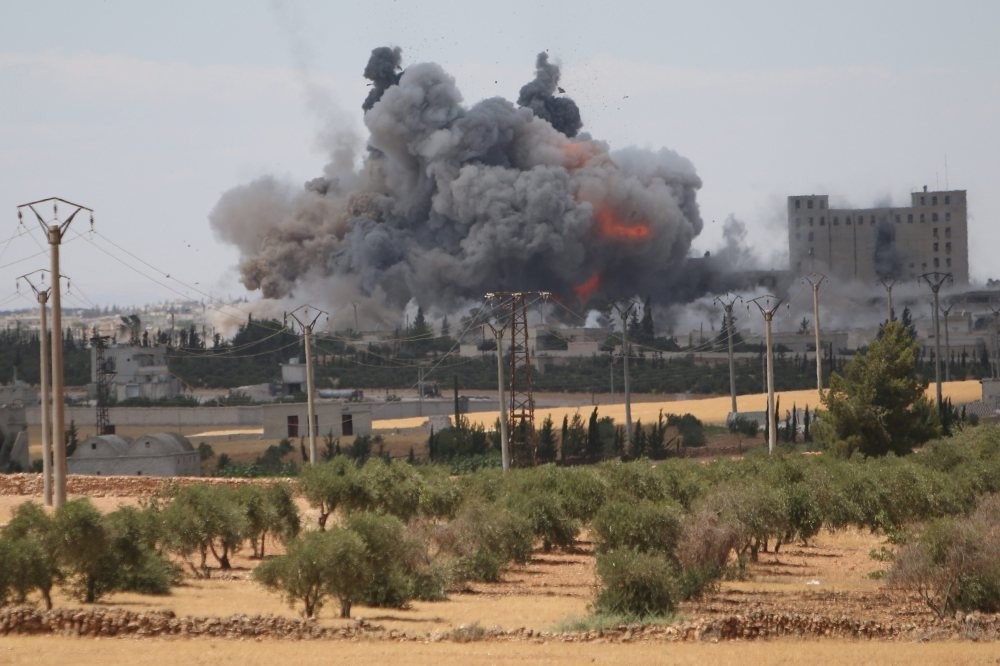 Smoke and flames rise after what SDF fighters said were U.S.-led airstrikes on mills in Manbij where DAESH militants are positioned in Aleppo Governorate, Syria, June 16.
by Daily Sabah with Reuters Jun 22, 2016 12:00 am

Despite all the U.S. support for the YPG-dominated SDF, the group lost three recently taken villages south of Manbij in northern Syria back to DAESH, hindering the SDF ground offensive

DAESH launched a counter-attack against fighters trying to capture the Syrian city of Manbij on Monday, inflicting heavy casualties on the PKK-linked People's Protection Units (YPG)-dominated Syrian Democratic Forces (SDF), the Syrian Observatory for Human Rights and the SDF said.

The monitor said DAESH militants retook three villages south of the besieged city in a surprise assault on the U.S.-backed SDF. At least 28 SDF fighters were killed.

The SDF were unable to manage to enter Manbij nearly three weeks after launching a major assault backed by U.S. air power and special forces to regain the city to seal off the last stretch of the Syrian-Turkish border.

An SDF spokesman said their forces succeeded in repulsing the DAESH attack and remain positioned on the outskirts of the city, most of whose residents remain trapped inside due to mines DAESH extremists have planted, digging in to defend the city.

"We are at the four gates to the city. The whole city is booby-trapped. After 20 days of the campaign, we have yet to storm the city," Sharfan Darwish, spokesman for the SDF-allied Manbij Military Council, told Reuters.

Ankara has long been skeptical about the YPG's activities in northern Syria, accusing the group of having expansionist policies under the guise of fighting DAESH. Despite many warnings from Ankara, the U.S. and other coalition countries continue to support the group that is affiliated with the PKK, which is recognized as a terrorist organization by the U.S. and EU.

Along with this setback in the fight against DAESH, the YPG has suffered heavy losses in the clashes. The coffins of YPG militants continue to arrive in Kurdish towns, and funerals for slain militants include PKK flags and banners of imprisoned PKK leader Abdullah Öcalan.

With these losses, the YPG has rushed to find new solutions to recruit forces in order to maintain the fighting and prevent possible threats. Turkish media reported this week that the group has established recruitment centers to increase recruitment in the fight against DAESH.

Citing a report from Turkish intelligence units on testimony from a youth who fled to Turkey from Democratic Union Party (PYD)-administered areas, the Hürriyet daily claimed that the PYD has taken measures against youths fleeing the fighting. The report said that those living in PYD-controlled areas born between 1986 and 1998 will be recruited by force rather than being given the option to join the group voluntarily.

Sources from the Turkish-Syrian border said that the group is also alarmed by the statement from President Recep Tayyip Erdoğan that Turkey is ready to "take matters into its own hands if needed," and it is trying to recruit people between the ages 18 and 60 in the northern Syrian town of Kobani, which the PYD currently controls.
RELATED TOPICS