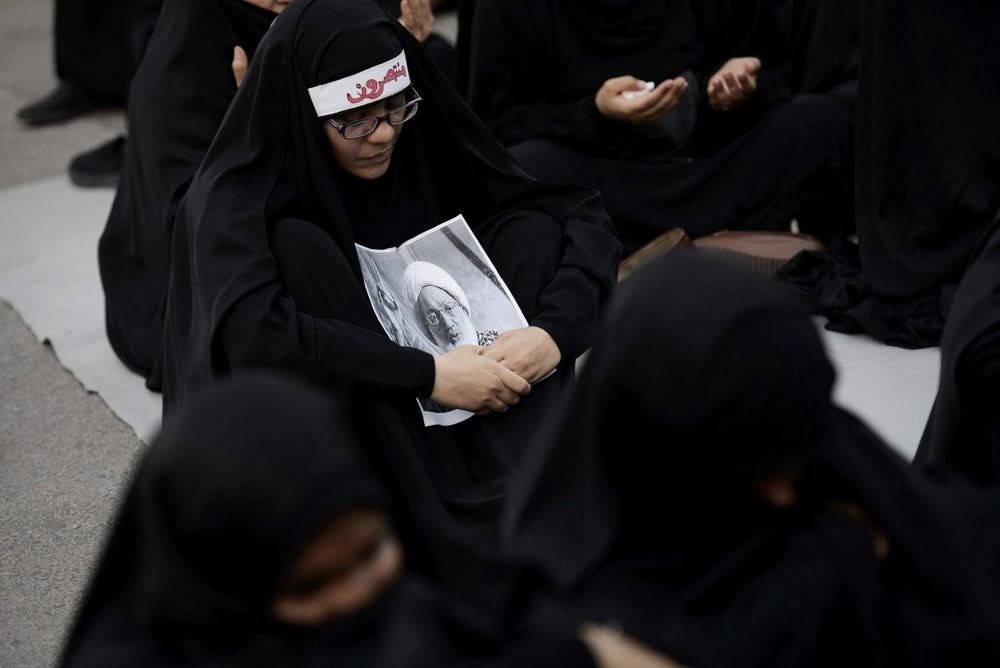 Hardline Bahraini Shiite demonstrators attend a protest against the revocation of the citizenship of a top Bahraini Shiite cleric.
by Daily Sabah with Wires Jun 22, 2016 12:00 am

Bahrain's stripping of the citizenship of a Shiite cleric has escalated tensions with Iran, as Tehran's administration considers itself the protector of all Shiites across the region and continues to play the sectarian card in regional politics

A leading Iranian general has warned Bahrain that it is fanning armed rebellion and "will pay the price" after a crackdown on its Shiite majority saw a community spiritual leader stripped of his nationality. The warning from General Qassem Suleimani, head of Iran's elite Revolutionary Guards' overseas operations arm, the Quds Force, came after Washington too strongly criticized the move by its Gulf Arab ally. "Surely they know that the aggression against Ayatollah Sheikh Isa Qassim is a red line... that will leave no option for the people but to resort to armed resistance," Suleimani told state media late on Monday. Bahrain's rulers "will pay the price and it will have no result but the destruction of this bloodthirsty regime," he added. It was a rare public pronouncement. As Iran has stepped up its military involvement in neighboring Iraq and in Syria, Suleimani has adopted an increasingly high profile, but he still rarely speaks out on policy issues. Bahraini authorities on Monday revoked the citizenship of Ayatollah Sheikh Isa Ahmed Qassim, the country's leading Shia cleric and the spiritual leader of Al-Wefaq, Bahrain's largest opposition movement. According to Bahrain's Interior Ministry, the step was taken because Qassim "damaged the country's supreme interests and failed to comply with his obligation to show loyalty to Bahrain."

In a statement posted on its official website, the ministry cited the country's citizenship law, which it said, "calls for the revocation of Bahraini citizenship… if anyone harms the interests of the kingdom or shows disloyalty to Bahrain." The ministry added, "Therefore, based on recommendations by Interior Minister Rashid bin Abdullah Al Khalifa, the Cabinet has issued a decree approving the revocation of citizenship from Isa Ahmed Qassim." The ministry went on to accuse the cleric of establishing "religious and political organizations with foreign links" – a veiled reference to Shia Iran – and "promoting an environment of extremism and sectarianism." The ministry further accused Qassim of "manipulating religious issues and political affairs in order to serve foreign interests," of "inciting sectarianism and violence" and "communicating with foreign organizations considered hostile to the Kingdom of Bahrain." Notably, the move comes less than one week after a Bahraini court ruled to indefinitely suspend all activities of Bahrain's Al-Wefaq National Islamic Society.

In Washington, the State Department voiced alarm over the decision, saying it is "deeply troubled" by Bahrain's "practice of withdrawing the nationality of its citizens arbitrarily, the overall precedent that this case could establish, and the risk that individuals may be rendered stateless." "We worry that this case, as well as other recent actions by the Government, will further divert Bahrainis from the path of reform and reconciliation," spokesman John Kirby said in a statement. "That path – which Bahrain's leadership had wisely pursued – remains the best means for enhancing the security of Bahrain and meeting the aspirations of all Bahrain's citizens."

The Shia-led Al-Wefaq, of which Qassim is considered the spiritual leader, represents Bahrain's largest opposition movement. The court accused Al-Wefaq of disrespecting the rights of citizens; undermining tolerance and coexistence; creating an environment conducive to terror and extremism; and supporting the notion of foreign intervention – another reference to Iran – in Bahrain's domestic affairs. On June 4, Bahraini King Hamad bin Isa Al Khalifa issued a decree ostensibly aimed at banning the "mixing of politics with religion," effectively prohibiting members of political groups from engaging in religious preaching. Only days earlier, Al-Wefaq Secretary-General Ali Salman was slapped with nine years behind bars on charges of "incitement" and "insulting the Interior Ministry." Al-Wefaq rejected the charges against Salman, asserting that there was "no legal or moral justification" for his arrest and subsequent incarceration. Bahrain has been rocked by revolt since 2011, when pro-democracy protests erupted in the tiny Gulf state as part of the "Arab Spring" uprisings. The Sunni-led government blames Al-Wefaq for the upheaval, accusing the Shia party of pursuing an "Iranian agenda." Al-Wefaq, for its part, denies the allegations, saying it wants to see a "constitutional government" established in the kingdom.

A similar crisis broke up between Iran and Saudi Arabia in January after a Shiite cleric Nimr al-Nimr was executed on Jan. 2. The execution deepened the regional political rift between Riyadh and Tehran, as Iran accused Saudi Arabia of deliberately targeting members of Saudi Arabia's Shiite community. Iran has considered itself the leader of all Shiite Muslims across the world as a state policy since the revolution in 1979, but has been isolated by other Muslim regional powers due to disputes over Iraq, Syria and Yemen. Iran has preferred to ally with Russia and China in Syria. The latest move by Saudi Arabia revealed that Iran has no Muslim ally in the region, as Bahrain and Sudan cut their diplomatic relations with Tehran after the Saudi Embassy in Tehran was torched by protesters after Nimr was executed. The United Arab Emirates reduced its relations to a charge d'affaires. Al-Azhar, the Cairo-based seat of Sunni Muslim learning, and the Organization of Islamic Cooperation in Saudi Arabia, condemned the attacks on Riyadh's missions and stressed Tehran's obligation to respect the internal affairs of the kingdom, according to Reuters.

Iran, which has a centralized Shiite version of Islam, and Saudi Arabia along with other Gulf countries which apply the strict religious jurisprudence of Salafi-Wahhabi thought, have entered into a competition over the region, seeking to apply sectarian policies from which the people of the region suffer. Both are far from the mainstream Islamic understanding that is in effect from Indonesia to Senegal, yet the two countries have followed expansionist policies.
RELATED TOPICS