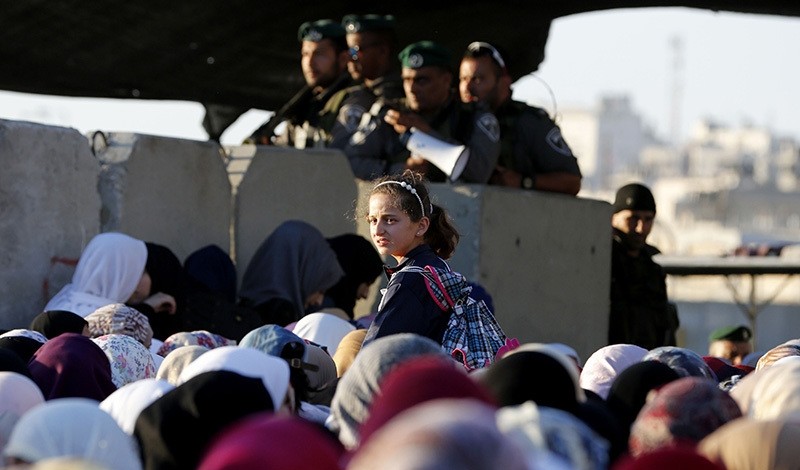 Palestinians wait to cross the Israeli Qalandia checkpoint as Muslim worshippers make their way to attend the second Friday prayer of the holy fasting month of Ramadan in Jerusalem's al-Aqsa mosque compound, on June 17, 2016 (AFP Photo
by Anadolu Agency Jul 02, 2016 12:00 am

A new Middle East Quartet report on the Israeli-Palestinian conflict is flawed because it "lacks objectivity," charged the head of the Organization of Islamic Cooperation (OIC) Saturday.

In a statement, OIC Secretary General Iyad Madani commented on the report, which proposes a negotiated two-state solution as the only way to achieve peace between Israel and Palestine.

Decrying the way the report by the Quartet-made up of the U.S., the UN, the EU, and Russia-equates the Palestinian people and the Israeli occupiers, Madani said: "The report is not objective while describing Israel's occupation and its illegal policies which hinder a political solution."

Madani called on the Middle East Quartet to act as a mediator to halt Israel's occupation of Palestinian territories and pave the way for the establishment of a Palestinian state whose capital is East Jerusalem.

Stressing the ongoing Israeli occupation of Palestinian territories, Madani said 2,420 Palestinians have been killed in the last two years alone, while many have had their houses destroyed, their water and electricity cut off as collective punishment, and their financial and natural resources seized.

The report released on Friday said the expansion of Israeli settlements, attacks on civilians, and the dire humanitarian condition in Gaza are "severely undermining hopes for peace."

The report also reiterated that a negotiated two-state outcome is the only way to achieve an enduring peace that meets Israeli security needs and Palestinian aspirations for statehood and sovereignty, ends the occupation that began in 1967, and resolves all permanent status issues.

Israel occupied East Jerusalem and the West Bank during the 1967 War. It later annexed the city in 1980, claiming it as the unified capital of the Jewish state in a move never recognized by the international community.