Israel to build about 800 illegal settlements in the occupied West Bank, East Jerusalem 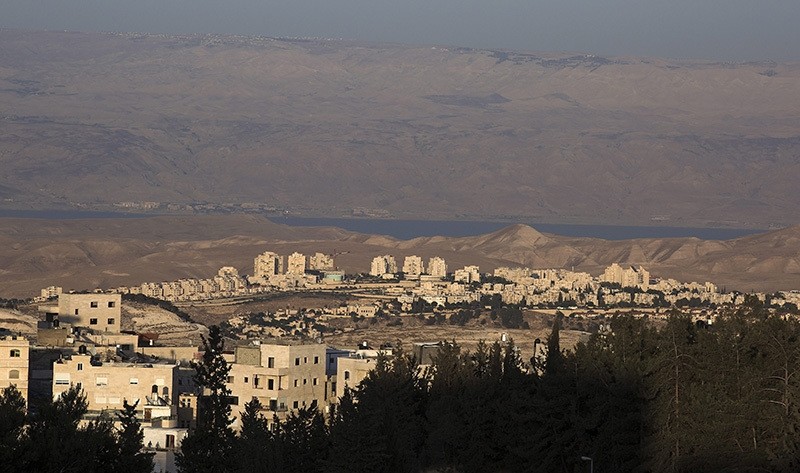 A general view of the Israel Jewish West Bank settlement of Mau2019ale Adumim, seen from Jerusalem, and the dead sea and Jordan in the background, on 06 June 2016 (EPA Photo)
by Daily Sabah with Agencies Jul 04, 2016 12:00 am

Some 600 units will be built in the settlement of Ma'aleh Adumim, in the West Bank east of Jerusalem, and some 200 within the Israeli-drawn municipal boundaries in the East Jerusalem settlements of Har Homa, Gilo and Ramot.

On July 1, the Middle East Quartet - the United Nations, the European Union, the United States and Russia - said in a report that Israel should end its settlement activities in the West Bank if it is serious about a two-state solution in the Middle East, issuing recommendations for both sides in the conflict.

The report was issued amid renewed international efforts to revive Middle East peace talks. The last attempt, led by the US, collapsed in April 2014.

Israeli Prime Minister Benjamin Netanyahu and Palestinian President Mahmoud Abbas have both expressed support for a two-state solution, but the report warns that "continuing on the current course will make this prospect increasingly remote."

Violence has flared up since 2014, and Israel has been criticized for its settlement activities in the West Bank.

Ongoing settlement-building, the earmarking of land for Israeli use and the denial of Palestinian development is "steadily eroding the viability of the two-state solution," the quartet says in the report. "This raises legitimate questions about Israel's long-term intentions."

Netanyahu's government is however considered the most right-wing in Israel's history, with key members of his cabinet strong supporters of settlement building and opponents of a Palestinian state.