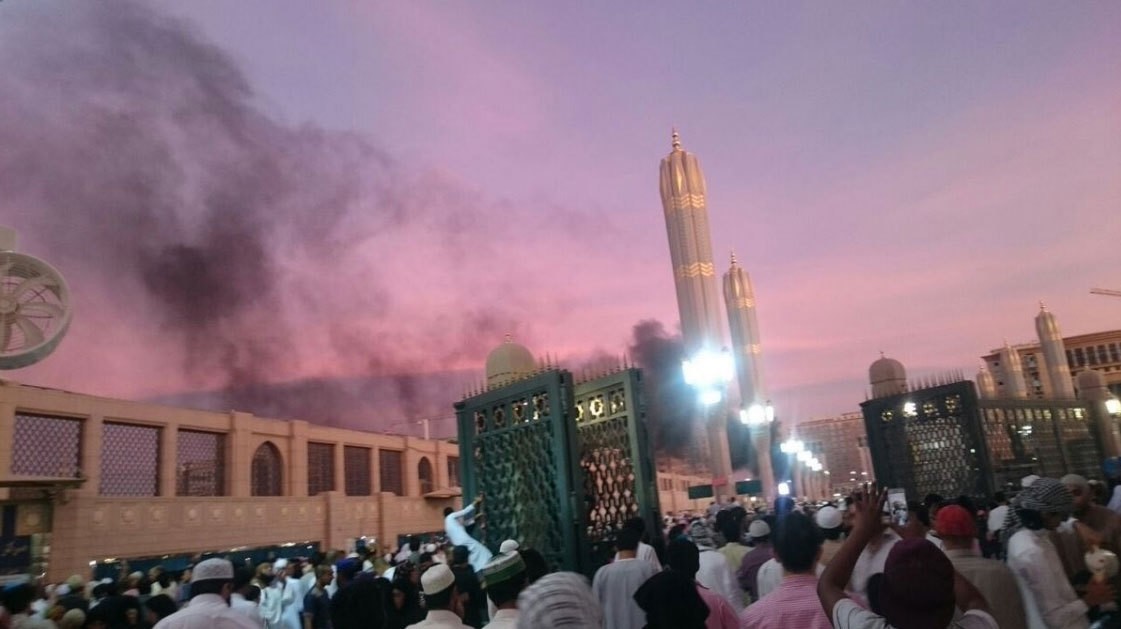 Suicide bombers struck three cities across Saudi Arabia on Monday, in an apparently coordinated campaign of attacks as Saudis prepared to break their fast on the penultimate day of the holy month of Ramadan.

The explosions targeting U.S. diplomats, Shiite worshippers and a security headquarters at a mosque in the holy city of Medina follow days of mass killings claimed by Daesh, in Turkey, Bangladesh and Iraq. The attacks all seem to have been timed to coincide with the approach of Eid al-Fitr, the holiday that celebrates the end of the fast.

The Saudi Interior Ministry said early Tuesday that 4 security officers were killed, 5 were wounded in the suicide bombing in Medina.

The two leaders also noted their determination to strengthen ties between the two countries.

Both Erdoğan and Salman exchanged their greetings for the Turkish and Saudi nations that will mark the Islamic Eid al-Fitr holiday on Tuesday along with the rest of the Muslim world.

Turkish Ministry of Foreign Affairs released a statement later on the same day in which it condemned the terror attacks in Saudi Arabia. "We will continue cooperation with Saudi Arabia against terror," the ministry added.

A Saudi security official said an attacker parked a car near the U.S. consulate in Jeddah before detonating the device. The official said the government was checking the reports of blasts in Qatif and Medina.

In the only one of the three attacks that appeared to have caused many casualties, a suicide bomber detonated a bomb near the security headquarters of the Prophet's Mosque in Medina, the second-holiest site in Islam.

A video sent to Reuters by a witness to the aftermath of the Medina bombing showed a large blaze among parked cars in the fading evening light, with a sound of sirens in the background. A picture sent to Reuters showed a burnt and bleeding man lying on a stretcher in a hospital.

Other pictures circulating on social media showed dark smoke billowing from flames near the Mosque of the Prophet, originally built in the 7th century by the Prophet Muhammad, who is buried there along with his first two successors.

The sprawling mosque is visited by millions of Muslims from around the world each year during pilgrimages to Mecca. The area would have been teeming with pilgrims for prayer during the final days of the Muslim holy month of Ramadan, which ends this week.

In Qatif, an eastern city that is home to many members of the Shiite minority, at least one and possibly two explosions struck near a Shi'ite mosque.

Witnesses described body parts, apparently of a suicide bomber, in the aftermath.

A resident of the city reached by telephone said there were believed to be no casualties there apart from the attacker, as worshippers had already gone home to break their fasts. Civil defence forces were cleaning up the area and police were investigating, the resident said.

A video circulating on social media and purporting to show the aftermath of a Qatif blast showed an agitated crowd on a street, with a fire raging near a building, and a bloody body part lying on the ground. Reuters could not immediately verify the video.

The attack in Qatif did not appear to cause any injuries, said resident Mohammed al-Nimr, whose brother is Nimr-al-Nimr, a prominent Saudi Shiite cleric executed in January. He told The Associated Press the bomber detonated his suicide vest when most residents of the neighborhood were at home breaking the daily Ramadan fast.

Qatif is heavily populated by Shiites, who are a minority in the Sunni-ruled kingdom. Al-Nimr said that near the body of a suicide bomber was a car bomb that also went off around the same time.

Daesh's local affiliates in the kingdom have previously attacked Shiite places of worship, including an attack on a Shiite mosque in Qatif in May 2015 that killed 21 people.

Hours earlier a suicide bomber was killed and two people were wounded in a blast near the U.S. consulate in the kingdom's second city Jiddah.

Earlier Monday, the Interior Ministry said a suicide bomber had detonated his explosives when security guards approached him near the U.S. Consulate in Jiddah. The attacker died and the two security men were lightly wounded, according to the ministry statement, which was published by the state-run Saudi Press Agency. Some cars in the parking lot were damaged.

Interior Ministry spokesman Maj. Gen. Mansour al-Turki was quoted in the statement as saying the guards noticed the man was acting suspiciously at an intersection on the corner of the heavily fortified consulate, near a hospital and a mosque.

The U.S. Embassy in Saudi Arabia confirmed there were no casualties among consular staff, and said it remains in contact with Saudi authorities as they investigate.

No one immediately claimed responsibility for the attack.

The Interior Ministry did not say whether the bomber intended to target the U.S. diplomatic compound, adding that an investigation is underway to determine his identity.

The state-run news channel al-Ekhbariya, quoting the Interior Ministry, said the bomber was not a Saudi citizen, but a resident of the kingdom. It gave no further details on his nationality. There are around 9 million foreigners living in Saudi Arabia, which has a total population of 30 million.

Footage aired on the channel after the attack showed crime scene investigators and police casing the area for evidence and dusting for fingerprints. Al-Ekhbariya said security forces detonated six explosive devices found at the scene.

A 2004 al-Qaida-linked militant attack on the U.S. Consulate in Jiddah killed five locally hired consular employees and four gunmen. The three-hour battle at the compound came amid a wave of al-Qaida attacks targeting Westerners and Saudi security posts.

More recently, Saudi Arabia has been a target of Daesh attacks that have killed dozens of people. In June, the Interior Ministry reported 26 terror attacks in the kingdom in the last two years.

The U.S. Embassy regularly issues advisory messages for U.S. citizens in Saudi Arabia. In a message issued Sunday and another one issued after the attack Monday, the embassy urged Americans to "remain aware of their surroundings, and take extra precautions when travelling throughout the country." It also advised citizens to "carefully consider the risks of traveling to Saudi Arabia."

In neighboring Kuwait on Monday, security forces said they had arrested several suspects with alleged ties to Daesh, including an 18-year-old man who was planning to attack a Shiite mosque in the final days of Ramadan. Officials did not say when the arrests took place. A Daesh affiliate claimed responsibility for a suicide bombing carried out by a Saudi man last year in one of Kuwait's oldest Shiite mosques. That attack killed 27 people.

Daesh has carried out a series of bombing and shooting attacks in Saudi Arabia since mid-2014 that have killed scores of people, mostly members of the Shiite Muslim minority and security services.

Police and groups of local volunteers increased security near mosques in Qatif after suicide bombings hit mosques in Shi'ite areas last year, killing dozens. Another suicide blast at a mosque used by security forces also killed 15 a year ago.