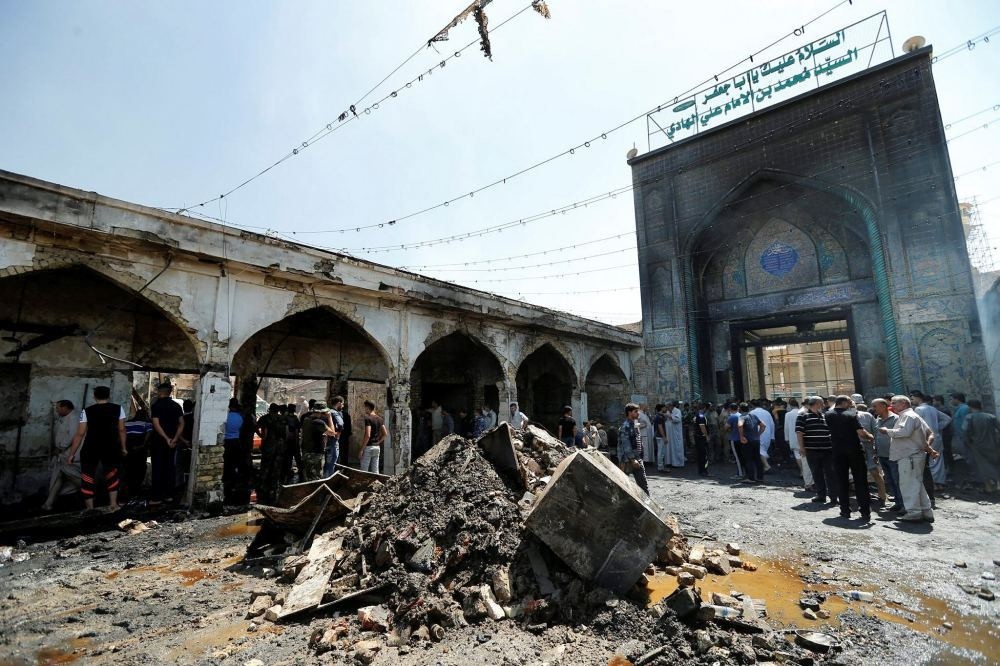 People gather at the site of a suicide bombing at the entrance of Mausoleum of the Sayid Mohammed bin Ali al-Hadi in Balad, north of Baghdad. (Reuters Photo)
by Compiled from Wire Services Jul 09, 2016 12:00 am

DAESH carried out three suicide bombings in Iraq's Baghdad, killing at least 35 people. The Iraqi government, under fire over recent terrorist attacks, fired the security chief as outrage increases across the country

DAESH claimed a triple suicide attack on Thursday evening near a Shiite mausoleum north of Baghdad, which killed at least 35 people and wounded 60 others, according to Iraqi security sources. The attack on the Mausoleum of Sayid Mohammed bin Ali al-Hadi reignited fears of an escalation of the sectarian strife between Iraq's Shiites and Sunnis. The Shiite form a majority in Iraq but Sunnis are predominant in northern and western provinces, including Salahuddin where the mausoleum is located. Prominent Shiite cleric Moqtada al-Sadr ordered his militia, the Peace Brigade, to deploy around the mausoleum, near Balad, about 93 kilometers north of Baghdad. Sadr's militia is also deployed in Samarra, a nearby city that houses the shrine of Imam Ali al-Hadi, the father of Sayid Mohammed whose mausoleum was attacked on Thursday. A 2006 bombing destroyed the golden dome of the shrine of Ali al-Hadi and his other son, Imam Hasan al-Askari, setting off a wave of sectarian violence akin to a civil war.

Pictures posted on social media showed a fire burning in the market located at the entrance of the Sayid Mohammed mausoleum. It was not clear if the site itself was damaged. A man detonated an explosive belt at the external gate of the mausoleum at around 11 p.m., allowing several gunmen to storm the site and start shooting at worshippers on the occasion of the Eid al-Fitr festival, according to the security sources. At least one gunmen blew himself up in the middle of the crowd while another was gunned down by the guard of the mausoleum before he could detonate his explosive belt. The site also came under rocket fire during the attack that was claimed by DAESH. The extremist group said in a statement the attack was carried out by three suicide bombers wearing explosive belts. The militants have lost ground since last year to U.S.-backed government forces and Iranian-backed Shiite militias, but recent bombings showed they still have the ability to strike outside the territory they control in northern and western Iraq. A massive truck bomb killed at least 292 people in a mainly Shiite shopping area of central Baghdad over the weekend, in the deadliest single bombing since the U.S.-led invasion that toppled Saddam Hussein in 2003.

Iraq's prime minister reacted to mounting public anger over government security failings by firing Baghdad's security chief. Haider al-Abadi fired the commander of Baghdad Operations, a statement from his office said, as the embattled prime minister faced growing protests at the site of a large-scale bombing, where at least 186 people were killed earlier this week. The statement said other security and intelligence officials were also sacked, but did not specify who.

Meanwhile, Britain's former Prime Minister Tony Blair is accused of dragging the U.K. into war in Iraq through blindly following the U.S. The infamous British politician is asked to account for the killing of British troops and the emergence of DAESH in Iraq. The decision to go to war was the most contentions act of Blair's decade as prime minister between 1997 and 2007. By the time British combat forces left Iraq in 2009, the conflict had killed 179 U.K. troops, almost 4,500 U.S. personnel and more than 100,000 Iraqis. Iraq descended into sectarian strife after the occupiers dismantled Saddam's government and military, unleashing chaos that helped give rise to DAESH. The inquiry, which was seven years in the making and headed by retired civil servant John Chilcot, concluded that Britain joined the U.S.-led invasion "before the peaceful options for disarmament had been exhausted." "Military action at that time was not a last resort," Chilcot said as he published the report. The war overshadows the legacy of Blair, whose government has been accused of exaggerating prewar intelligence about Saddam's alleged weapons of mass destruction.
RELATED TOPICS