Egyptian and Israeli Foreign Ministers come together in rare visit 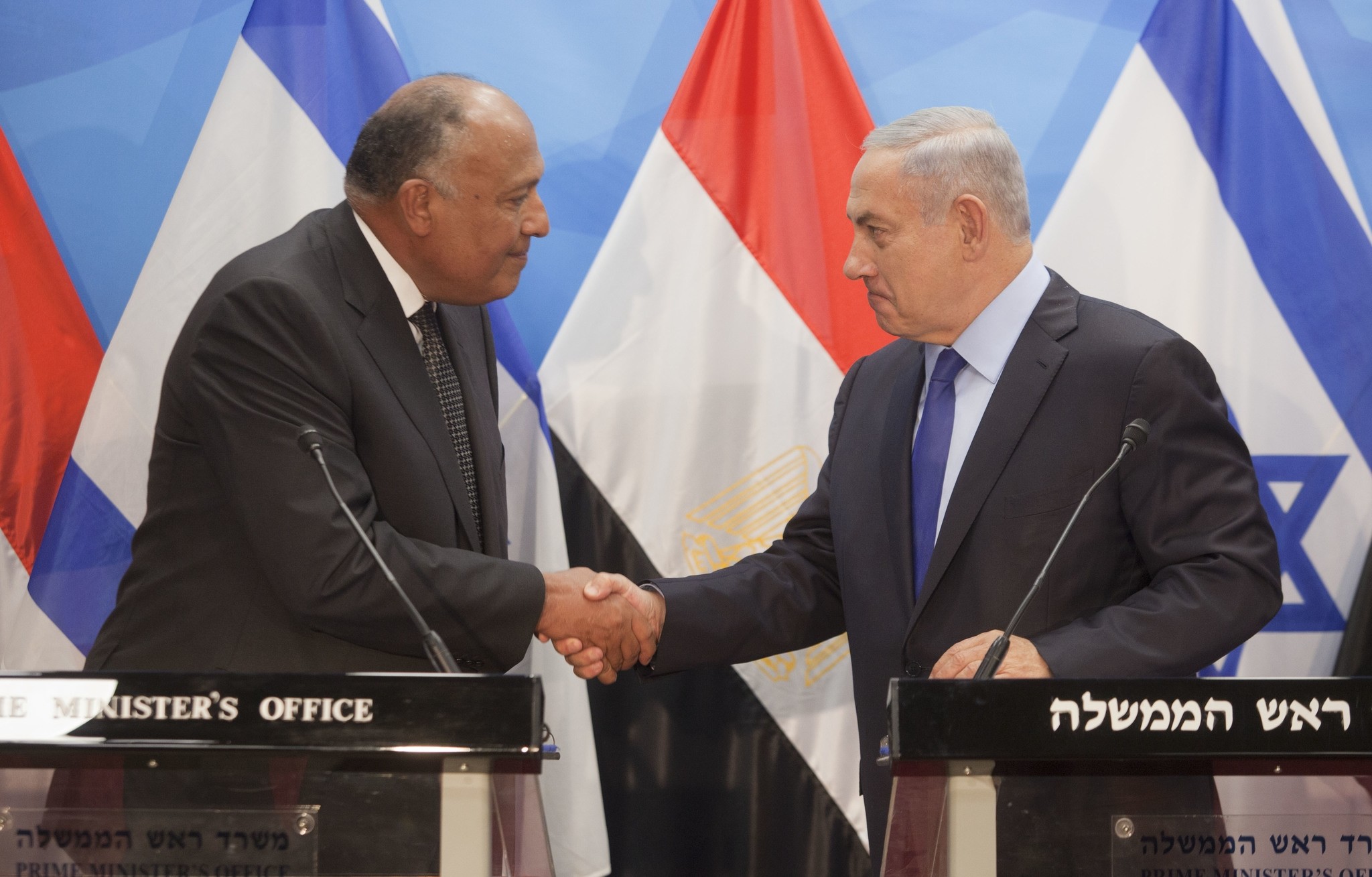 Egypt's foreign minister met Israeli Prime Minister Benjamin Netanyahu on Sunday on reviving peace efforts with the Palestinians, the first such visit in nearly a decade and the latest sign of warming ties.

The trip came amid talk of renewing an Arab peace initiative and with Israel's military having recently saluted "unprecedented" intelligence cooperation with Egypt to combat Daesh.

Speaking to journalists alongside Netanyahu before their meeting, Foreign Minister Sameh Shoukry said it was a "crucial and challenging juncture for the Middle East".

Resolving the decades-old Israeli-Palestinian conflict would have a "far-reaching and dramatic and positive impact on the overall conditions of the Middle East region", he said.

"Egypt remains ready to contribute toward achieving this goal."

Shoukry also warned of the "constant deterioration" of the situation on the ground since the last round of Israeli-Palestinian peace talks collapsed in April 2014.

He said the current lack of process towards peace was "neither stable nor sustainable", and stressed the need for "serious steps to build confidence" toward a solution.

Netanyahu welcomed Egypt's Abdel Fattah al-Sisi's "recent offer of Egyptian leadership and efforts to advance peace with the Palestinians and a broader peace in our region".

He also called on Palestinians to engage in direct negotiations, as he has repeatedly done in the past.

Netanyahu and his wife Sara later hosted the Egyptian foreign minister for dinner at their Jerusalem residence.

Palestinian leaders say years of talks with Israel have not ended the occupation, and have instead pursued international diplomacy to promote their cause.

On June 29, Shoukry met Palestinian leaders during a visit to the West Bank city of Ramallah.

Sisi said in May there was a "real opportunity" for an Israeli-Palestinian deal that could lead to warmer ties between his country and Israel.

In 1979, Egypt was the first Arab state to sign a peace treaty with Israel after years of conflict, and it remains an influential player in the region.

However, ties have been formally cold over Israel's policies toward the Palestinians, and relations further soured after the June 2012 election of the Muslim Brotherhood's Mohamed Morsi as Egyptian president.

After president Hosni Mubarak's ouster in the 2011 revolution, protesters stormed Israel's embassy in September that year amid clashes with police.

Morsi was ousted by a military coup led by Sisi in July 2013, who was elected Egypt's president in 2014.

In June, representatives from 28 Arab and Western countries, the Arab League, European Union and the United Nations met in Paris to discuss ways to help advance peace efforts.

Netanyahu has at the same time spoken of reviving a long-dormant Arab peace initiative dating to 2002.

That proposal essentially calls for Israel to withdraw from the occupied territories and resolve the issue of refugees with the Palestinians, leading to the creation of a Palestinian state, in exchange for normalised relations with Arab countries.

But some analysts have questioned whether Netanyahu's comments were an attempt to fend off international critics over his appointment of hardline Defence Minister Avigdor Lieberman and his opposition to the French plan.

Netanyahu has said he would seek changes to the Arab proposal. The Arab League has said the terms cannot be changed.

There have been repeated warnings that Israeli settlement building are eroding the possibility of a two-state solution, especially with peace efforts at a standstill since April 2014.

Violence since October has killed at least 214 Palestinians, 34 Israelis, two Americans, an Eritrean and a Sudanese.

Palestinians were shot dead during protests and clashes, while some were killed by Israeli air strikes in the Gaza Strip.

Egypt and Israel have cooperated in other areas, particularly after militants in Egypt's Sinai Peninsula pledged allegiance in November 2014 to Daesh.

In April, Israel's deputy chief of staff spoke of an "unprecedented level of cooperation" with Egypt, mainly regarding intelligence.

Shoukry said the situation in the Middle East was "becoming ever more volatile and dangerous, particularly as the phenomenon of terrorism continues to grow and proliferate, representing an existential threat to the peoples of the region and the world at large".