US to send over 500 troops to liberate Mosul from Daesh 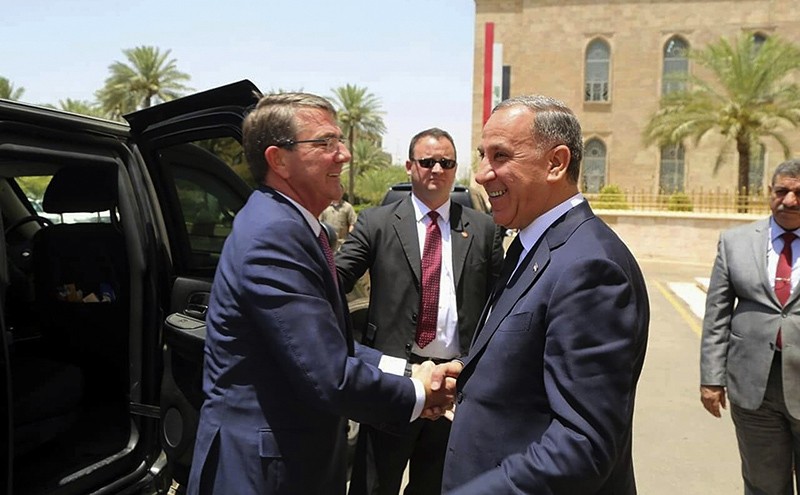 Visiting U.S. Defense Secretary Ash Carter, left, shakes hands with Iraqi Defense Minister Khaled al-Obeidi at the Ministry of Defense, Baghdad, Iraq, Monday, July 11, 2016 (AP Photo)
by Compiled from Wire Services Jul 11, 2016 12:00 am
The United States will send about 560 more troops to Iraq to step up the campaign against Daesh and advise local forces in a plan to retake the terrorists' stronghold in Mosul this year, Defense Secretary Ash Carter said on Monday.

Some of them will go to the Qayara airbase which Iraqi forces recaptured on Saturday near the northern city, he added during a trip to Baghdad.

The deployment will raise the cap on U.S. troops in Iraq to about 4,650.

The U.S. official, al-Noufal said, planned to hold talks with his Iraqi counterpart, Khaled al-Obaidi, along with Iraqi Prime Minister Haider al-Abadi, the commander of Iraq's armed forces, and other officials.

According to al-Noufal, talks between Carter and Iraqi officials would focus primarily on a planned military campaign aimed at recapturing the northern city of Mosul from the Daesh terrorist group, which in mid-2014 overran large swathes of territory in northern Iraq.

Carter's last visit to Baghdad was in April, during which he also discussed ongoing efforts to recapture territory from Daesh with Iraqi officials.

On Saturday, Iraqi forces retook the Qayyarah Air Base -- located just south of Mosul -- from Daesh militants. They now hope to use the base as a launchpad for a major campaign aimed at recovering Mosul itself.

Baghdad has repeatedly announced its intention to "liberate" Mosul -- Iraq's second largest city -- before the end of the year.

Hours after Carter's arrival to Baghdad, his Canadian counterpart, Harjit Singh Sajjan, also arrived in the Iraqi capital, according to the Iraqi Defense Ministry.

"Iraqi Defense Minister Khalid al-Obeidi has received his Canadian counterpart and the military delegation accompanying him," the ministry said in a statement.

The ministry gave no further details, but a ministry source -- who spoke anonymously due to restrictions on speaking to media -- said Sajjan also planned to discuss anti-Daesh operations with Iraqi leaders, with an emphasis on the planned campaign to retake Mosul.

Canada is a member of an international, U.S.-led anti-Daesh coalition, which has been striking Daesh targets from the air -- in both Iraq and Syria -- since the terrorist group's dramatic territorial gains in 2014.