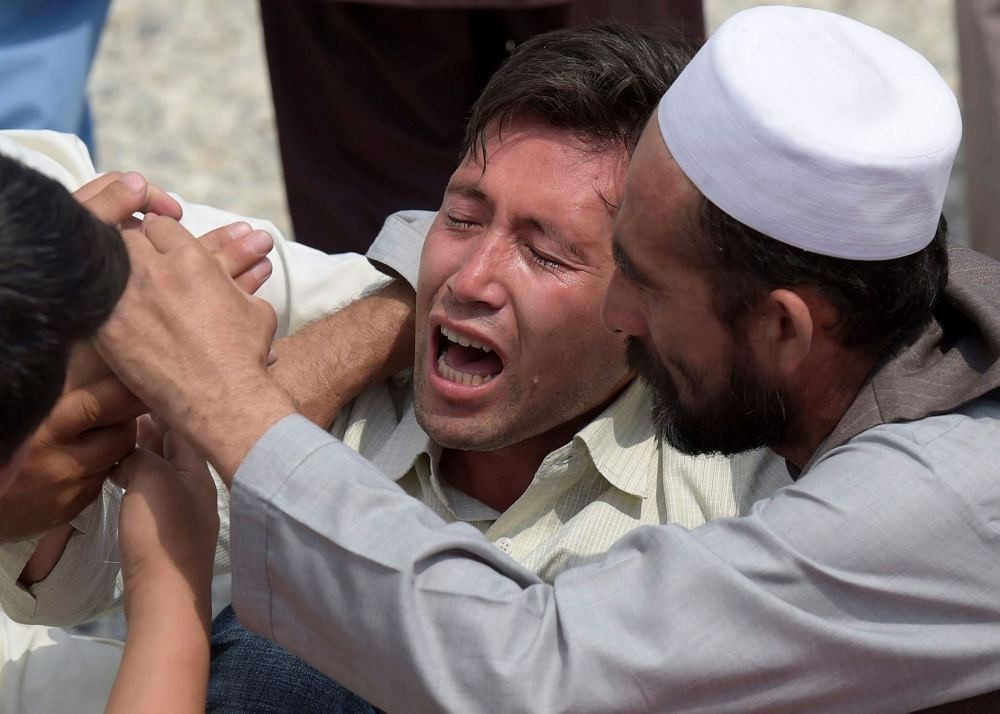 A man mourns after learning his relative died of injuries in the hospital.
by Daily Sabah with Wires Jul 24, 2016 12:00 am

Afghanistan marked a national day of mourning on Sunday, a day after at least 80 people were killed and more than 230 wounded in a DAESH-claimed suicide attack on a peaceful demonstration

Relatives of some of those killed in a big suicide attack in Kabul searched through a bloodied assortment of belongings left after the twin blasts as they prepared for funerals on Sunday in a mood of growing anger with political leaders. "Those are my cousin's sandals," said Sayed Mohammad as he stood in a crowd of people looking for anything familiar among the remnants spread out by authorities on an Afghan flag in the Dasht-e-Barchi area of Kabul where the funerals will take place. Sayed's cousin was one of four relatives he lost on Saturday when suicide bombers set off twin blasts at a demonstration by members of the mainly Shiite Hazara community who were protesting against the planned route of a power line. "His dead body is in a hospital. He was the only bread winner of his family. I'm looking here if I can find anything more from other relatives."

President Ashraf Ghani announced a national day of mourning after the attack, claimed by DAESH. At least 80 people were killed and more than 230 wounded in one of the worst bombings since the fall of the Taliban government in 2001. The attack, described by the top U.N. official in Afghanistan as a "war crime", drew a shocked reaction from across the world, with condemnation and offers of support from countries including Russia and the United States. But for some, there was a sense of fury at both the government and Hazara political leaders who they said have exploited the grievances of their community at longstanding discrimination to shore up their own power bases. "They sold us and we will never forget this," said Ghulam Abbas, a Hazara mourner.

"They've built skyscrapers for themselves and their families from our blood." The Hazara, a Persian-speaking minority who make up about 9 percent of the population, have by and large supported Ghani's government, which includes some of their senior leaders, but many complain bitterly that their support has not been returned. Saturday's protest over the route of a multimillion dollar power line, which demonstrators wanted to re-route through two provinces with large Hazara populations, had become a touchstone for a wider sense of injustice. The demonstration took place under tight security, with much of Kabul blocked off. But there was disagreement in the Hazara community as well as in the government about whether it should have gone ahead given the obvious risk of an attack. For many, such as 42 year-old Dost Mohammad, who was nearby when the two explosions went off, there was a sense of abandonment by the authorities. "With all this misery, the government doesn't care about its own citizens."

The international community has strongly condemned the terror attack. Foreign Ministry of Turkey in a statement said that "We strongly condemn the terrorist attack, wish God's mercy on those who lost their lives, hope for a speedy recovery to the wounded and convey our condolences to the Government and the brotherly people of Afghanistan."
Last Update: Jul 24, 2016 9:17 pm
RELATED TOPICS