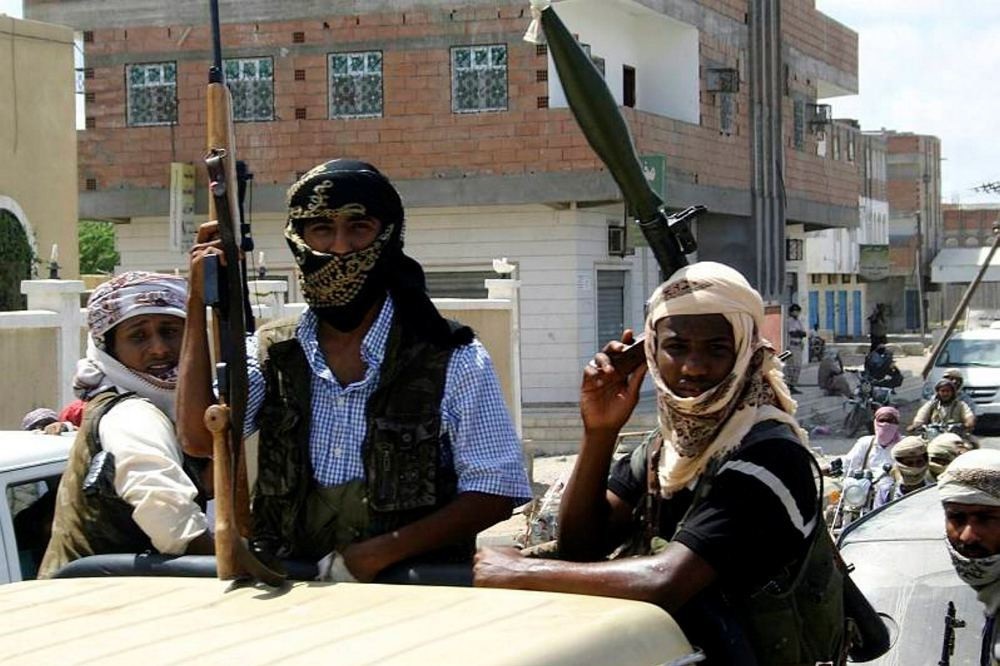 Members of Ansar al-Sharia, an al-Qaida affiliated group, carrying their weapons as they ride in the back of a truck in the southern Yemeni town of Jaar.
by Daily Sabah with Wires Sep 02, 2016 12:00 am

Amid continuing clashes between the Saudi-led alliance and Iran-backed Shiite militias, Saudi Arabia's foreign minister said on Wednesday that Yemen's Houthi rebels would not be allowed to take over the country, pointing out increasing tension between the two countries over the war-torn Yemen.

"We see Iran supporting Houthis in Yemen and trying to take over the government, supply weapons to the Houthis, smuggle explosives to Bahrain, Kuwait and Saudi Arabia," Saudi Minister, Adel Al Jubeir said, as reported by Reuters. "We wish we could be as good neighbors like before the 1979 revolution. It's up to Iran to mend its behavior," he added.

Saudi Arabia accuses Iran of supplying the Houthi with weapons and attempting to destabilize countries in the Arabian Gulf. Yemen plays a significant role for Saudi Arabia against Iran's influence over the violence-hit Middle East region. The advance of the Iranian-allied Shi'ite Houthi group raises fears of the possible disintegration of the country.

Yemen, the poorest country in the Middle East, hit by political instability and intermittent violence, is fueling the spread of al-Qaida and DAESH due to the dangerous military escalation following a breakdown in the cease-fire between government supporters and Shiite rebels, the U.N. special envoy to Yemen warned the Security Council on Wednesday. Ismael Ould Cheikh Ahmed, who has been trying to halt the fighting and negotiate a political solution, said a new cessation of hostilities is a key to restarting talks to end the civil war in the Arab world's poorest country.

Yemen is of crucial importance for the U.S., as the country is home to one of their worst enemies, al-Qaida's deadliest franchise, the AQAP. Since 2002, the U.S. has been conducting counterterror strikes and operations against radical militants as part of U.S. national security policy.

Houthi rebels and forces allied with ousted President Ali Abdullah Saleh seized the capital Sanaa in September 2014, forcing the internationally recognized government to flee the country. A Saudi-led, U.S.-backed coalition has conducted an extensive air campaign against the Houthis since March 2015, pushing them out of southern Yemen, but failing so far to dislodge them from the capital Sanaa and the rest of the north. Meanwhile, extremist groups including the Islamic State and Al Qaida in the Arabian Peninsula have exploited the turmoil and expanded in the south.

Ahmed said the two militant groups "continue to wreak havoc in significant parts of Yemen," pointing to Monday's suicide bombing by the Islamic State group in the southern city of Aden that killed dozens as just one example.

Ahmed said he was encouraged by the Yemeni army's growing ability to confront extremist groups but warned "the absence of the state in many parts of Yemen, in addition to the chaos created by war, will continue to facilitate the expansion of these terrorist groups which represents a real threat to the region."

Meanwhile, the escalation of fighting has led to a steadily worsening humanitarian situation with over three million people displaced from their homes, food prices rising sharply while incomes have dropped dramatically amid a liquidity crisis, Ahmed said. On Tuesday, U.N. Humanitarian Coordinator Jamie McGoldrick said at least 10,000 civilian have been killed and wounded since the conflict began.
RELATED TOPICS