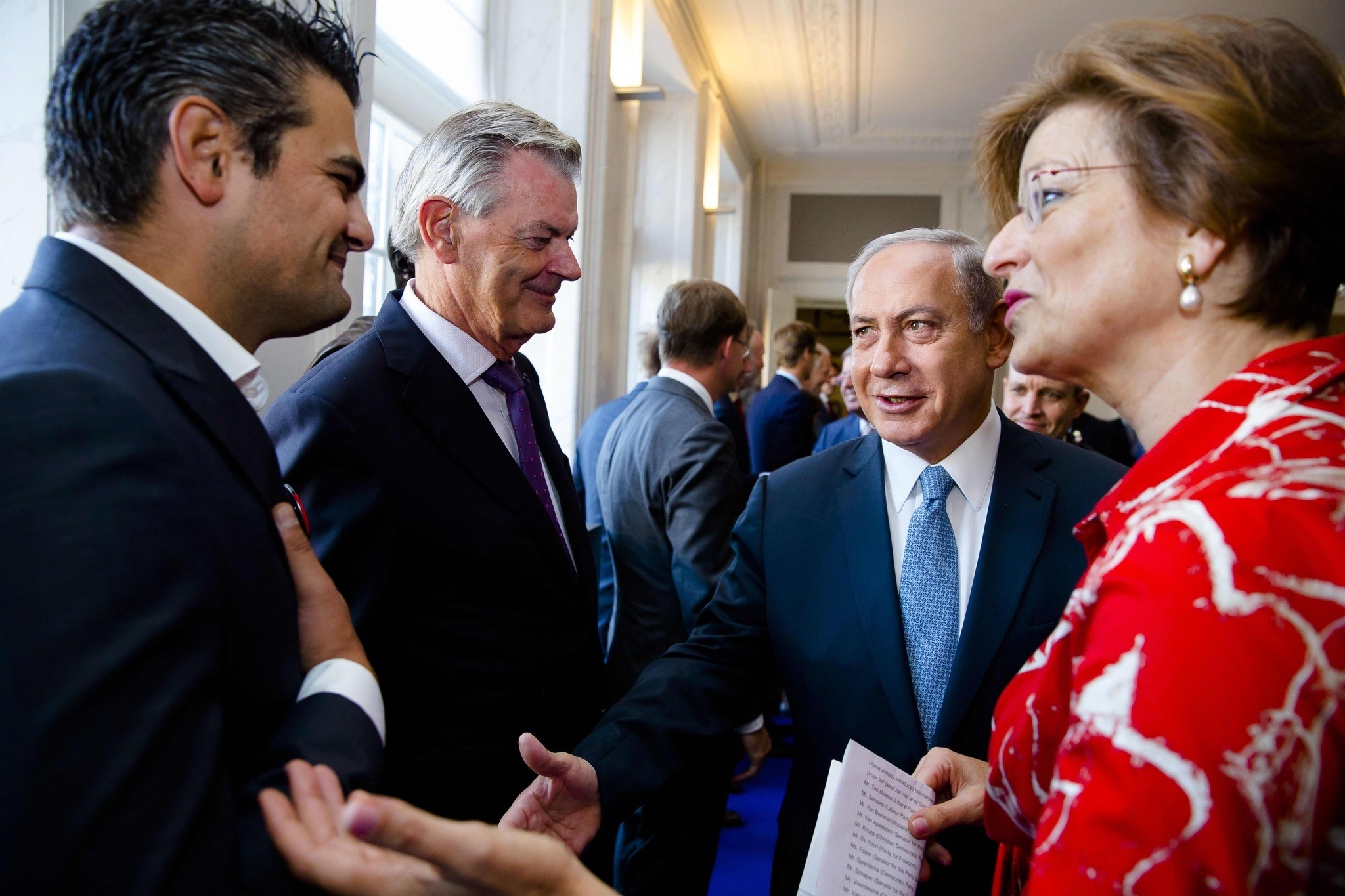 Dutch Parliament Member Tunahan Kuzu (L) refuses to shake hands with Prime Minister Benjamin Netanyahu during his visit to the States General at the Binnenhof. (AFP Photo)
by Anadolu Agency Sep 07, 2016 12:00 am

A Dutch lawmaker refused to shake hands with Benjamin Netanyahu during the Israeli leader's visit to the Netherlands' parliament on Wednesday.

As the Israeli PM shook hands with other members of parliament Tunahan Kuzu -- wearing a Palestinian flag lapel pin -- held his hands behind his back.

Netanyahu continued greeting other lawmakers after the incident.

"What a boss," a Twitter user said, praising Kuzu's action.

Kuzu, a lawmaker and co-founder of the far-left and the pro-immigrant Denk party, had criticized Netanyahu's visit via his social media account.

The 35-year-old lawmaker is known for his support for Palestinians and worked in the Netherlands to have Palestine recognized as a state.

Rik Grashoff, a member of GroenLinks (Green Left) also tweeted there should be more pressure and sanctions against Israel.

Another Dutch lawmaker from the Labor Party, Michiel Servaes, wrote on Twitter that he had a "long but disappointed conversation" with the Israeli leader.

The Israeli PM's two-day visit to the Netherlands ended Wednesday.

Earlier this week, a former Dutch prime minister, Dries van Agt, described Netanyahu as a "war criminal" and said he should be prosecuted.

Van Agt made his comments in an interview with NPO1 TV on Monday.

Known as a pro-Palestinian activist, van Agt -- prime minister between 1977 and 1982 -- also shared a cartoon of Netanyahu in which the Israeli prime minister is depicted as walking backwards from a sign showing the way to peace.

The former premier said building on occupied territory was a war crime.

The Dutch foreign ministry was not able to comment to Anadolu Agency Wednesday morning.

Netanyahu started his visit to the Netherlands with a claim to a news conference in The Hague he was ready to meet Palestinian President Mahmoud Abbas.

"If Mahmoud Abbas wants to meet without preconditions for direct talks, I am ready any time. I have been calling on him to do this for seven years already and if he agrees to do so there will be a meeting," Netanyahu was quoted as saying by YnetNews.com.

Netanyahu's comments followed Abbas's Tuesday remark that a proposed meeting in Moscow would not be held for now.