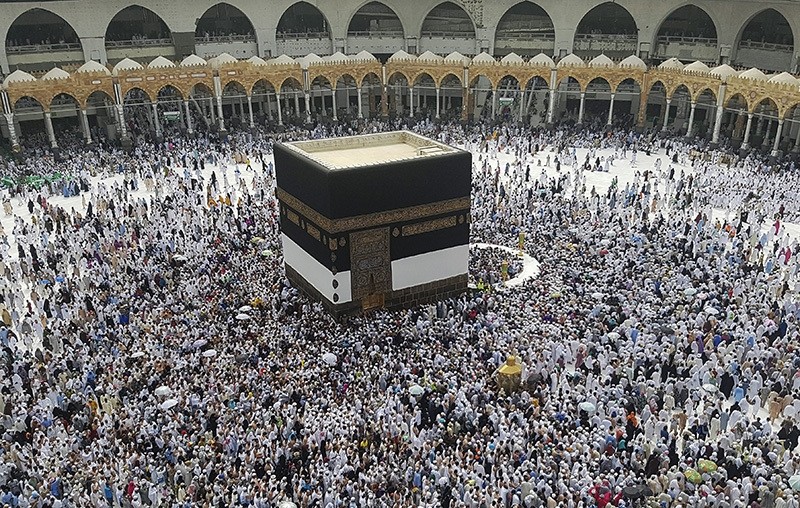 From Asia, Africa and points in between, nearly 1.5 million Muslims launched the annual hajj pilgrimage to Islam's holiest sites on Saturday.

The numbers are down because of the absence of tens of thousands of Iranians over tensions between their Shiite nation and Sunni-dominated Saudi Arabia, which is home to the sites in Mecca and Medina.

The 2015 stampede magnified those frictions.

After preliminary rituals this week in Mecca at the Grand Mosque, the pilgrims moved on Saturday, many by bus, in debilitating temperatures exceeding 40 C (100 F) to Mina, several kilometres (miles) to the east.

They are following in the footsteps of their Prophet Mohammed who performed the same rituals about 1,400 years ago.

"It's an indescribable feeling. You have to live it to understand. This is my sixth hajj and I still cannot express how happy I am to be in Mecca," said Hassan Mohammed, 60, from Egypt.

The hajj is one of the five pillars of Islam, which capable Muslims must perform at least once, marking the spiritual peak of their lives.

"People come from every country of the world, talk every language of the world, and meet here in one place under one banner, the profession of the Muslim faith," said Ashraf Zalat, 43, also from Egypt.

The first day of hajj was traditionally the chance for pilgrims to let their animals drink and to stock up on water.

Then they proceed to Mount Arafat, several kilometres further, for the peak of the hajj on Sunday.

Mina becomes their base, where an expanse of solidly-built white fireproof tents can accommodate 2.6 million pilgrims.

Last September 24, Mina was the scene of the deadliest disaster in hajj history, when a stampede broke out as pilgrims made their way to the Jamarat Bridge for a stoning ritual.

This year's "Stoning of the Devil" will start on Monday.

Although Riyadh maintained the stampede death toll was 769, data from foreign officials in more than 30 countries gave a tally almost three times higher - at least 2,297.

Saudi Arabia announced an investigation but no results have ever been released, although a number of safety measures have been taken.

Government facilities have been moved out of Mina to free up space, Saudi newspapers reported, and roads in the Jamarat area expanded.

Officials have been issuing pilgrims with bracelets that digitally store their personal data, after some foreign officials expressed concern about difficulties in identifying the stampede dead.

AFP found pilgrims wearing the new bracelets which authorities aim to give each of the more than 1.4 million faithful from abroad, who are expected to be joined by more than 100,000 Muslims residing in Saudi Arabia.

But there has been no figure for the number of bracelets distributed so far.

Interior ministry spokesman General Mansour al-Turki spoke of "great efforts being exerted by the kingdom, not only in maintaining the security and safety of the pilgrims, but in facilitating performance" of the rites.

Many pilgrims appeared satisfied on Saturday.

"Everything is well organised," said Nasser Benfitah, 54, from Morocco.

"We feel safe," chimed in a Nigerian pilgrim, Hafsa Amina, 26.

Saudi Arabia has invested billions of dollars in hajj infrastructure and safety projects over the years.

This includes expansion of the Grand Mosque whose complex includes a plaza of white stones stretching for hundreds of metres (yards).

Just beyond this area, known as the Haram, or sacred site, luxury multi-storey hotels and shopping centres fill the skyline.

The hajj draws rich and poor, whose common humanity is emphasised by the white garment that each man wears. Women wear loose dresses, typically also white.

Many pilgrims now beam their spiritual journey back home through cyberspace to family and friends, and a range of specially-designed mobile applications can be downloaded.

Despite the safety and security measures which Saudi Arabia says it has taken, Iranian authorities have questioned the kingdom's custodianship of Islam's holiest places.

The two countries do not have diplomatic relations and are at odds over a string of regional issues including the wars in Yemen and Syria.

Iran reported the largest number of stampede victims, at 464, and its pilgrims are excluded for the first time in decades after the regional rivals failed to agree on security and logistics.