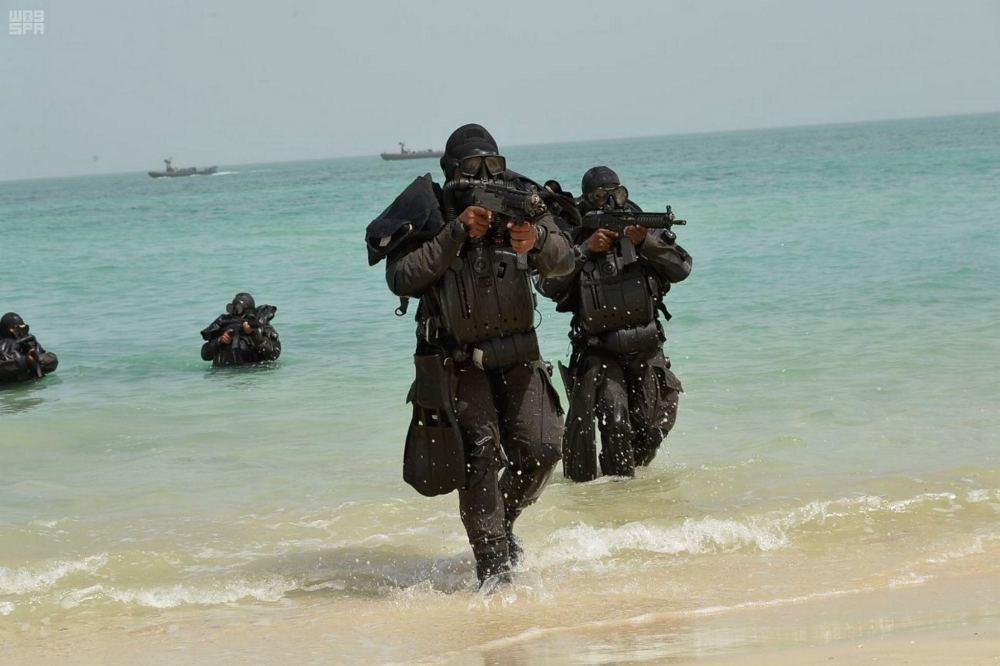 Amid several proxy wars in the Middle East including in Syria and Yemen, tension between Tehran and Riyadh has heightened as Saudi navy vessels start naval exercises in the Gulf

In a sign of heightened tensions between the two regional rivals, Iran's powerful Revolutionary Guards (IRGC) warned Saudi naval vessels taking part in military exercises in the Gulf on Wednesday not to get close to Iranian waters. "The Revolutionary Guards naval forces believe this war game is mainly to create tension and destabilize the Persian Gulf," the IRGC said in a statement published on Tasnim news agency.

Saudi Arabia began naval war games including live fire exercises on Tuesday in the Gulf and Strait of Hormuz, the world's most important oil route. Exercise Gulf Shield 1 has begun with naval ships, aircraft, marines and "special units," the Saudi Press Agency said. The maneuvers are also taking place in the strategic Strait of Hormuz and the Sea of Oman.

Navy Brigadier Majid al-Qahtani said the exercises include "shooting of live ammunition" as part of the effort to improve combat readiness and protect the kingdom's waters "against any possible aggression."

About 17 million barrels per day, or about 30 percent of all seaborne-traded oil, passed through the Strait of Hormuz in 2013, according to the U.S. Energy Information Administration. The United States, the kingdom's leading non-Arab ally, said in August and September that IRGC vessels "harassed" U.S. warships several times in the Gulf in incidents that Washington described as "unsafe and unprofessional."

Last week, an Iranian commander said two of Tehran's warships held maneuvers with an Italian frigate in the Strait of Hormuz after it made an Iranian port call.

Major oil producers in the Gulf, including world top exporter Saudi Arabia, ship most of their exports through the Hormuz, which Iran has threatened to close during past rounds of tension. Saudi Arabia's navy consisted of 13,500 men, including 3,000 marines and a helicopter wing, according to The Military Balance 2015, issued by the International Institute for Strategic Studies.

Saudi Arabia and Iran, which have no diplomatic relations, are at odds over regional issues including the wars in Syria and Yemen.

Saudi Arabia is concerned by the growing clout in the region of Shiite Iran, which has emerged from years of international economic sanctions following a deal over its nuclear program signed by Tehran and world powers in 2015.

Saudi Arabia is leading a coalition of Muslim countries, backed by the United States, Britain and France, in a war in neighboring Yemen. The campaign, aimed at restoring a government ousted by an Iran-allied militia, is part of a more assertive effort by Riyadh since last year to counter Iran's influence. A Saudi-led coalition, including naval forces, operates a blockade of Yemen as part of efforts to prevent weapons reaching Shiite Houthi rebels and their allies who overran much of Saudi Arabia's neighbor. The United States and Saudi Arabia accuse Iran of sending missiles and other weapons to the rebels, but Tehran denies the charge. Yemen plays a significant role for Saudi Arabia against Iran's influence over the violence-hit Middle East region. The advance of the Iranian-allied Shiite Houthi group raises fears of the possible disintegration of the country.

In Syria, Iran asserts his backing for the Bashar al-Assad's regime insisting that Assad must remain in power in the immediate term. During the last two years, photos and reports have appeared in the Iranian media portraying Qassem Soleimani in Syria's war-ravaged city of Aleppo, conducting operation in coordination with Russia-backed Assad's forces, aiming to lead Iran's strategy in Syria.