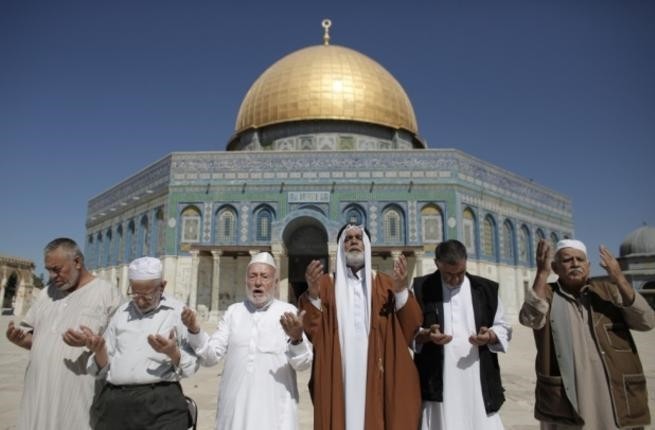 More than 500 Muslim leaders and clerics from 30 countries met in Istanbul on Friday to warn that the Al-Aqsa Mosque, Islam's third holiest site that is located in Jerusalem, is in danger.

The religious and political leaders, representing at least 50 civil society organizations and political parties in their countries assembled at the 8th Islamic Countries' Opinion Leaders Forum, titled "Al-Aqsa is in Danger" in Istanbul, organized by the Arab-Turkish Relations Center.

Yasin Aktay, vice chair of the ruling Justice and Development (AK) Party, represented Turkey as he spoke at the opening of the forum, saying: "Al-Aqsa [Mosque] being in danger means humanity is in danger, because Al-Quds [Jerusalem] gave us an example how people [from different sects] coexist peacefully in an ideal way."

Abderrazak Makri, president of the Movement of Society for Peace in Algeria, claimed: "There would be no success in any Islamic country without working on Palestine" and blamed foreign powers that "do not want us to become united, be developed. That is why we should be united to work for Al-Aqsa Mosque."

During last year's Rosh Hashanah holiday, which marks the Jewish new year, restrictions on men under 50 entering the mosque caused clashes in Jerusalem and the occupied West Bank.

A month-long series of Jewish holidays that start with Rosh Hashanah have in the past also caused heightened tensions as many Palestinians object to the increased numbers of Jewish visitors to the Al-Aqsa compound, which is revered by both Muslims and Jews, who know it as the Temple Mount.

Palestinians have in the past accused Israel of altering the status quo, a balance of prayer and visiting rights that reserves the right to worship at the site for Muslims, through its policing of Al-Aqsa and the surrounding area.

The tension caused by restrictions on entry to Al-Aqsa last year were followed by a period of violence that has seen at least 235 Palestinians killed by Israeli forces, mostly during clashes or alleged attacks.

"You know that the bad coup, the failed coup in Turkey was aiming to weaken Turkey because Turkey is taking a strong role on Palestine; because they wanted to stop Turkey supporting Palestine," Makri added.

He claimed that the military coup in Egypt in 2013, which ousted Morsi, had been triggered because he " wanted to break the [Israeli] siege, help Gaza."

Meanwhile, Mohammed Walid, head of the Syrian Muslim Brotherhood, spoke at the forum, addressed the crisis in his country.

He said he brought messages from Syrian opposition forces to Russia: "We did not go to the country to kill you, but you came to our country to kill our children, and our women, and to destroy our houses, history. We know that you are aggressor.

"You have intercontinental rockets, and missiles really effective against the bodies of children. […] We know that you are the most coward people in history," Walid said.

The clerics meet once a year in Turkey to discuss solutions for conflicts that challenge Muslim countries. The two-day forum ends Saturday.