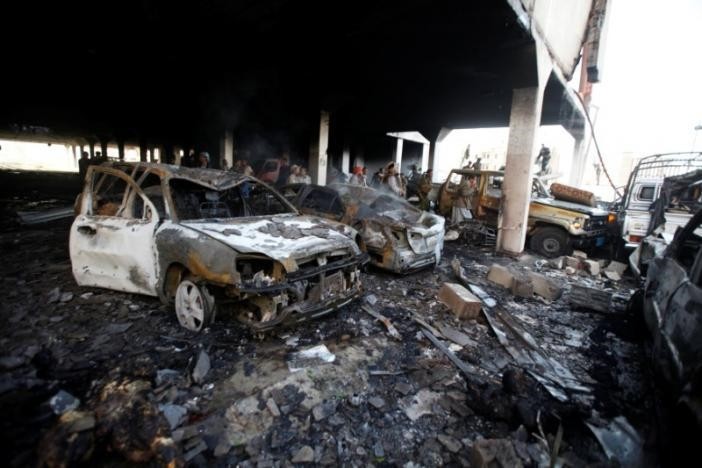 People stand at the site of an airstrike which witnesses said was by Saudi-led coalition aircraft on mourners at a hall in Sanaa, Yemen October 8, 2016. (REUTERS Phooto)
by Associated Press Oct 08, 2016 12:00 am

A Saudi-led coalition airstrike hit a funeral hall packed with thousands of mourners in Yemen's capital Saturday, killing over 140 people and wounding more than 525 in one of the deadliest single attacks of the country's civil war, a U.N. official said.

"The number of casualties from the air force of the Saudi-American aggression at the main hall in the capital Sanaa has risen to more than 450 dead and wounded," the Houthi-run Saba news agency quoted Abdul-Salam al-Madani, a deputy to the health minister, as saying.

Saudi Arabia announced early Sunday it would launch an investigation into "reports about the regrettable and painful bombing" in Sanaa, without immediately acknowledging that its coalition battling rebels in Yemen is the only force with air power in the conflict.

It is the latest in a string of bombings by the coalition that have struck hospitals, markets and other places civilians congregate.

"The place has been turned into a lake of blood," said one rescuer, Murad Tawfiq.

Saturday's funeral was held for Sheikh Ali al-Rawishan, the father of Galal al-Rawishan, the interior minister in the rebel-led government. Among those killed was Maj. Gen. Abdul-Qader Hilal, head of the capital's local council, officials said, while Galal Al-Rishwan was seriously wounded.

In the aftermath of the strike, hundreds of body parts were found strewn in and outside the hall. Rescuers collected them in sacks. The strike left the building little more than a shell, with most of its walls and roof gone. Cars parked outside were mangled by the blast.

Mohammed Abdul-Salam, the Houthis' spokesman in Sanaa, angrily denounced the airstrike as the latest act of "genocide" by the Saudi-led coalition.

"The silence of the United Nations and the international community is the munition of the murderers," he said. "Those murderers will not escape divine justice."

In a statement early Sunday, Saudi Arabia said an investigation would be launched into the strike. Previous investigations by the Saudis have blamed Houthi or rebel forces for gathering near the sites of their attacks.

"The coalition supporting the legitimate government in Yemen has announced that it is aware of reports about the regrettable and painful bombing of the Great Hall in Sanaa today, which led to the killing and injuring of casualties, as reported," the statement read.

It added: "The coalition confirms that its troops have clear instructions not to target populated area and to avoid civilians."

Jamie McGoldrick, the U.N. humanitarian coordinator in Yemen, said in a statement that the humanitarian community in the country is "shocked and outraged" by the airstrikes. He condemned the "horrific attack" and reminded all parties to the conflict "that under international humanitarian law, they are obliged to protect civilians and civilian infrastructures." He called for an immediate investigation into the incident.

"The international community must exert pressure and influence on all parties to the conflict to ensure civilians are protected," McGoldrick said. "This violence against civilians in Yemen must stop immediately."

Initial reports from health officials in Sanaa indicate that over 140 people were killed and more than 525 injured, McGoldrick said.

The incident has prompted the U.S. to initiate an immediate review of its already reduced support for the Saudi-led coalition, White House national security council spokesman Ned Price said. He warned that U.S. security cooperation with Saudi Arabia "is not a blank check."

The United States has backed the coalition with multi-billion dollar arms sales and provided logistical and intelligence support, though it reportedly began pulling some soldiers from that task in August over concerns about civilian casualties in Saudi-led airstrikes.

The Saudi-led coalition backs Hadi's government which, together with its own allies, is fighting the Houthis and Saleh loyalists in a civil war that broke out in 2014. It's a war largely overshadowed by the conflict against the Daish group elsewhere in the Middle East, though rights groups have mounted increased criticism of the Saudi-led airstrikes in recent months.

Saturday's attack comes after a Saudi-led coalition March 15 airstrike on a market in Yemen's northwestern city of Mastaba that killed at least 119 people. Saudi forces reportedly used U.S. munitions in that strike, which at the time was described as the second-deadliest of the Saudi campaign, after a July 2015 attack near a power plant in Mokha that killed at least 120 people.

A recent report by the U.N.'s human rights chief, Zeid Ra'ad al-Hussein, estimated that 3,799 civilians have been killed since the Saudi-led air campaign began in March of last year. The U.N. and rights groups estimate the conflict has claimed the lives of at least 9,000 people and displaced nearly 3 million more in the Arab world's poorest country.

According to the report, coalition airstrikes were responsible for 60 percent of civilian deaths over a yearlong span starting in July last year. Just under one-quarter — 475 — civilian deaths were attributed to rebel forces like those loyal to Saleh, and another 113 to affiliates of al-Qaida and the Daish group.