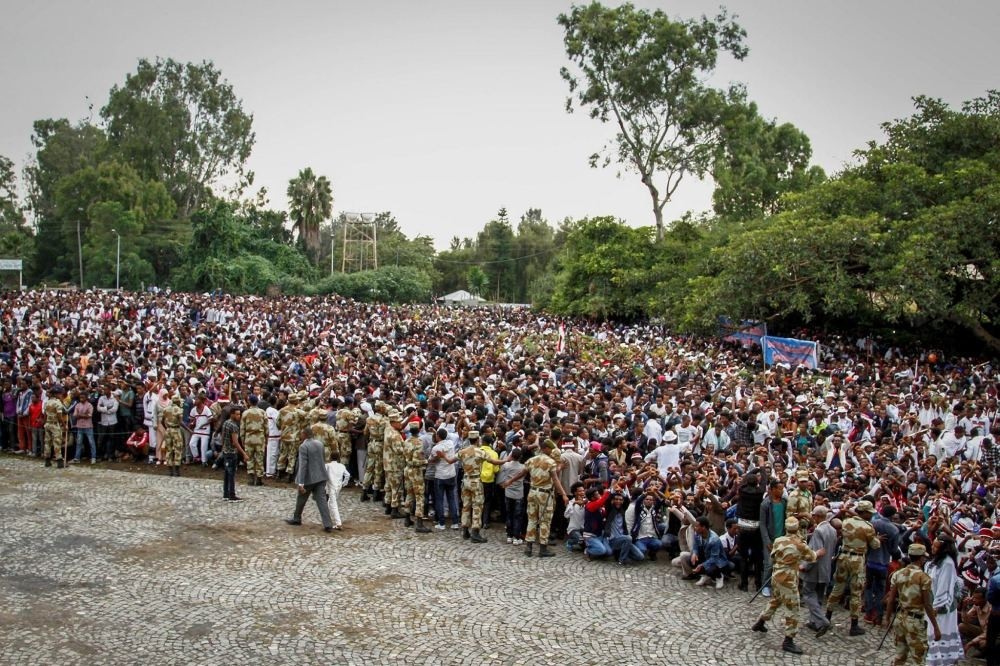 Ethiopian soldiers try to stop protesters during their march in Bishoftu, Ethiopia on Oct. 2.
by Compiled from Wire Services Oct 11, 2016 12:00 am

Ethiopia has accused Egypt of fomenting protests in its restive Oromia region and backing an outlawed group, following the declaration of a state of emergency

After a week of anti-government protests that resulted in violent deaths and property damage across Ethiopia, the relationship between Egypt and the African nation has become strained as Ethiopia accuses Egypt of interfering in the country's affairs and backing ethnic groups that have ignited tensions in the country, especially in the region of Oromia.

Ethiopian officials said Monday that foreign elements were arming, training and financing groups that it blames for a wave of unrest in regions around Addis Ababa, where protesters have targeted factories and accused the government of land grabs. "There are countries that are directly involved in arming, financing and training these elements," government spokesman Getachew Reda said during a news conference after Sunday's declaration of a state of emergency.

He named Egypt, which is embroiled in a row with Addis Ababa over sharing the waters of the Nile River to back "armed gangs." However, he said it could be non-governmental elements rather than "state actors." Eritrea, which has a long-running border dispute with Ethiopia, was also named by Ethiopian government officials.

Egypt's Foreign Ministry denied allegations over interfering in domestic affairs of Ethiopia, in a statement released on Sunday. The statement came after the Ethiopian Foreign Ministry summoned Egypt's ambassador to the country last week for discussions over a video that appeared online which purportedly shows members of the outlawed Oromo Liberation Front (OLF) sharing a stage with what Ethiopia's state broadcaster described as Egyptians. The OLF is an Ethiopian organization established in 1973 by Oromo nationalists, Ethiopia's largest ethnic group, that seeks self-determination for the Oromo region.

"The meeting of the Egyptian ambassador and the Ethiopian foreign minister showed common understanding of the necessity to maintain the positive momentum of the relations between the two countries," Egyptian Foreign Ministry's spokesman Ahmed Abu Zeid said in the statement.

Major towns and cities across Ethiopia's Oromia region are experiencing unrest and widespread violent protests of people demanding wider freedoms. More than 50 people were killed on Oct. 2 in a stampede triggered when police fired teargas and bullets to disperse the protestors at the annual Irrecha thanksgiving celebration in the town of Bishoftu. The Ethiopian government has declared a six-month state of emergency. In a televised address on Sunday morning, Ethiopia's Prime Minister Hailemariam Desalegn said the state of emergency was declared because there has been "enormous" damage to property. "The recent developments in Ethiopia have put the integrity of the nation at risk," he said. "There are sufficient grounds to declare a state of emergency in Ethiopia," said Abiy Chelkeba, assistant professor of law at Mekelle University. "The situation in many areas across the Oromia region has become so severe that law enforcement agencies themselves have become targets and were attacked with a high intensity. Moreover, the constitutional order of the country has been endangered. All in all, the value systems of the constitution like a respect for the national flag and adherence to the governance system are in danger."

Egypt-Ethiopia relations have been tense after controversy over Ethiopia's dam on the Nile River, dubbed the Grand Ethiopian Renaissance Dam (GERD). The $4.2-billion dam expected to generate up to 6,000 megawatts (MW) of power is currently under construction on Ethiopia's Blue Nile near the Sudanese border. In recent years, Egyptian officials have voiced fear that the dam's construction would serve to diminish Egypt's historical share of Nile waters. Lately, Ethiopia, Egypt and Sudan have signed a deal with two French consultancy firms to study the anticipated impact of a massive hydroelectric dam.
Last Update: Oct 11, 2016 1:05 am
RELATED TOPICS