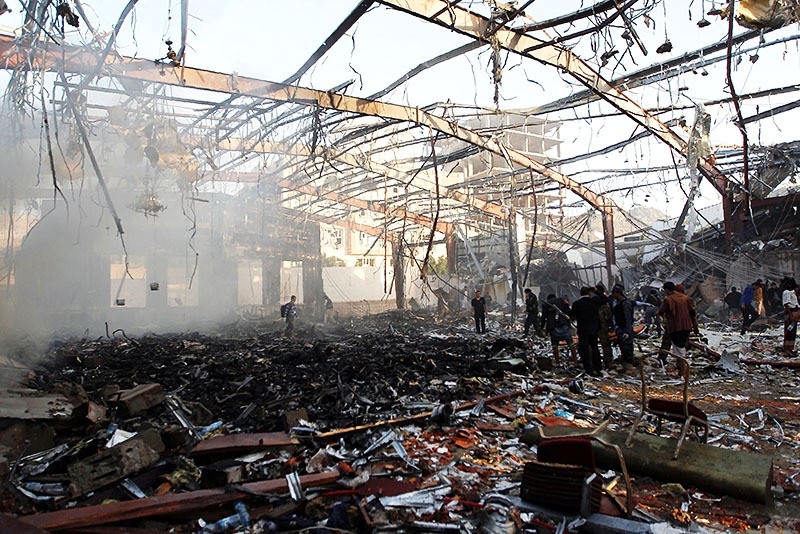 This file photo taken on October 8, 2016 shows a general view of the destruction following reported airstrikes on a funeral hall by Saudi-led coalition air-planes on a building in the capital Sanaa. (AFP Photo)
by Oct 15, 2016 12:00 am

The Saudi-led coalition battling Yemeni rebels said Saturday that one of its warplanes had "wrongly targeted" a funeral in the capital Sanaa, killing more than 140 people, and announced disciplinary proceedings.

The Joint Incidents Assessment Team (JIAT) claimed "a party affiliated to the Yemeni Presidency of the General Chief of Staff" passed wrong information that the hall was packed with Houthi leaders.

"Because of non-compliance with coalition rules of engagement and procedures, and the issuing of incorrect information, a coalition aircraft wrongly targeted the location, resulting in civilian deaths and injuries," JIAT said.

"Appropriate action... must be taken against those who caused the incident, and... compensation must be offered to the families of the victims."

The strike was one of the deadliest in the coalition's nearly 19-month-old bombing campaign in support of Yemen's beleaguered government.

More than 6,700 people have been killed in the impoverished Arabian Peninsula country since the coalition first intervened, nearly two-thirds of them civilians, according to the United Nations.

Britain is to present a draft resolution to the UN Security Council next week calling for an immediate ceasefire in Yemen, after an earlier text condemning the funeral bombing was rejected by Russia as not strong enough.

The inquiry team called on coalition commanders to change their procedures to prevent any repetition of the failings that led to the strike.

"Coalition forces must immediately review their rules of engagement and update their procedures to ensure adherence in future," the team said.

The air raid, which targeted the funeral of the father of a senior Huthi rebel commander, also wounded at least 525 people, more than 300 of them critically.

The outcry over the number of civilian casualties prompted the coalition to announce an easing of the air blockade it has enforced since March last year to allow the evacuation of the most seriously wounded for treatment abroad.

Human Rights Watch said that the strike was an "apparent war crime."

"While military personnel and civilian officials involved in the war effort were attending the ceremony, the clear presence of several hundred civilians strongly suggests that the attack was unlawfully disproportionate," the New York-based watchdog said on Thursday.

The coalition initially denied responsibility but after condemnation from Western governments, it promised an investigation of the "regrettable and painful" event.

A letter sent to the UN Security Council last weekend "expressed the kingdom's deep regret" over the "attack".

There was huge pressure on the coalition to publish the findings of its investigation into the raid as swiftly as possible.

The inquiry team concluded that "a party affiliated to the Yemeni presidency of the General Chief of Staff" wrongly passed information that there was a gathering of armed Huthi leaders in a known location in Sanaa, and insisted that the location be targeted immediately as a legitimate military target.

"The Air Operations Centre in Yemen directed a close air support mission to target the location without obtaining approval from the coalition command to support legitimacy and without following the Coalition command's precautionary measures to ensure that the location is not a civilian one that may not be targeted."