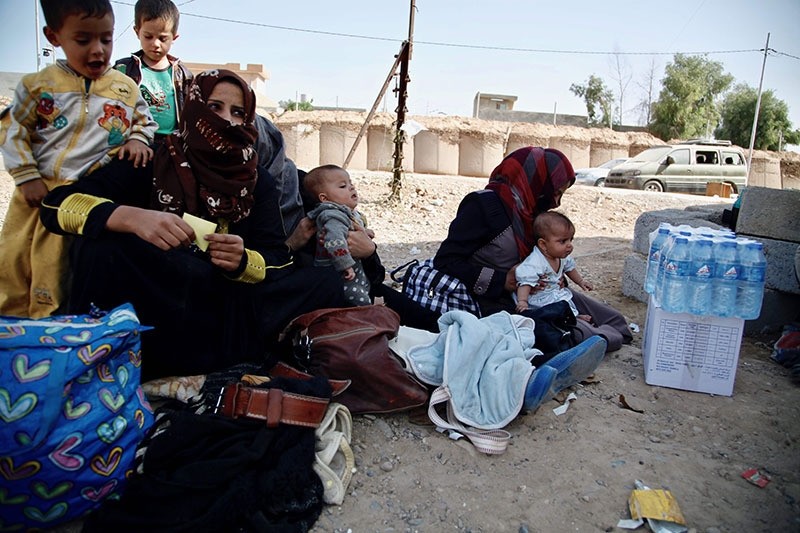 A handout picture release by Save The Children shows displaced Iraqi women, who fled the Islamic State (IS) group held Hawijah area, sitting with their children before being screened at the Dibis checkpoint (AFP Photo)
by Oct 17, 2016 12:00 am
Up to 100,000 Iraqis may flee to Syria and Turkey to escape the Iraqi government's military assault aimed at ousting Daesh from the northern city of Mosul, the United Nations refugee agency said on Monday.

The U.N. High Commissioner for Refugees (UNHCR) issued an appeal for an additional $61 million to provide tents, camps, winter items and stoves for displaced inside Iraq and new refugees needing shelter in the two neighbouring countries.

"UNHCR is concerned that events in Mosul may cause up to 100,000 Iraqis to flee towards Syria and Turkey," it said. "Preparedness plans are underway in Syria to receive up to 90,000 Iraqi refugees."

Iraqi government forces, with air and ground support from the U.S.-led coalition, launched an offensive on Monday to drive Daesh from the northern city of Mosul, the terrorists' last major stronghold in the country.

More than three million people are already internally displaced in Iraq and aid agencies say up to one million could flee Mosul, a city of 1.5 million where in 2014 Daesh self-proclaimed a "caliphate" in Iraq and Syria.

UNHCR said that a site that previously hosted Iraqi refugees is being readied to accommodate another wave in Syria, currently home to some 26,000 Iraqi refugees, many of whom have been living in exile for 10 years.

UNHCR said that within Iraq it had in place 21,800 tents, sufficient to cover the shelter needs of 130,800 people, with more arriving every day. "Given the possible scale of displacement, additional tents are a priority for UNHCR."