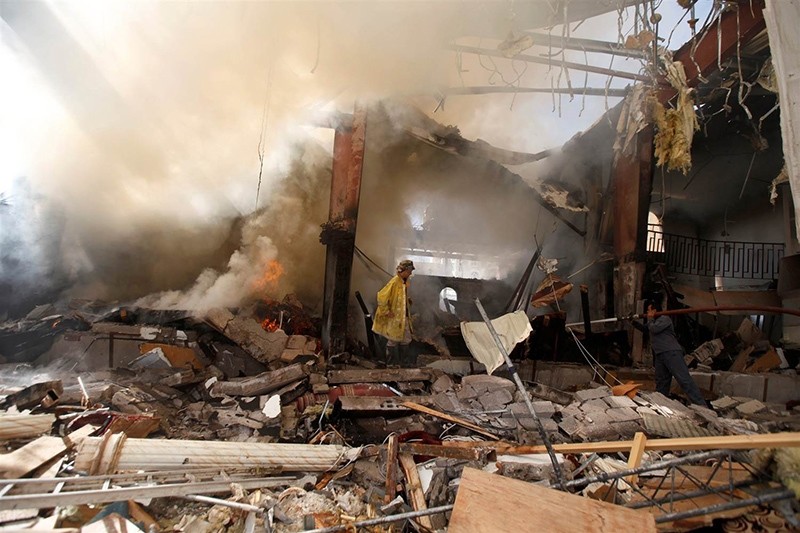 In a bid to end the Yemen war, the United Nations has announced a new ceasefire in war-ravaged Yemen early Thursday, after a week of escalated fighting sparked new international calls to stop the violence. Yemeni President Abd Rabbu Mansour al-Hadi approved a three-day truce Monday, the country's foreign minister said. Hadi's approval came in response to an appeal launched by the U.S. and the United Kingdom on Sunday for an immediate and unconditional cease-fire. Before the UN announcement, Saudi Foreign Minister Adel Jubeir also said Riyadh was in favor of a truce if the rebels respect it, the daily Asharq al-Awsat reported.

A cessation of hostilities "will re-enter into force at 11:59 p.m. Yemen time (8:59 p.m. GMT) on Oct. 19, for an initial period of 72 hours subject to renewal," UN special envoy for Yemen Ismail Ould Cheikh Ahmed said in a statement late Monday.

This is the sixth attempt to establish a Yemen ceasefire. The April truce, declared in conjunction with the start of peace talks in Kuwait, was hardly observed on the ground with each side blaming the other for violations. It collapsed as the talks ended in August with no breakthrough, prompting an intensified round of fighting.

A U.S. Navy destroyer came under fire from the Houthi rebels in Yemen on Sunday, the third such incident in a week. "The [USS] Mason once again appears to have come under attack in the Red Sea, again from coastal defense cruise missiles fired from the coast of Yemen," Navy Admiral John Richardson, chief of naval operations, told reporters at an event in Baltimore, broadcaster NBC News said.

Iran-backed Shiite Houthi rebels fired missiles on a U.S. Navy destroyer last Wednesday in their first direct attack on the U.S. Navy, which has several warships close to Yemeni waters. The U.S. military launched cruise missile strikes on Thursday in retaliation to failed missile attacks. The strikes, authorized by U.S. President Barack Obama, represent Washington's first direct military action against suspected Houthi-controlled targets in Yemen's conflict. The rebels have denied the attacks, although they have repeatedly denounced Washington's backing for the Saudi-led campaign, which they usually refer to as the "American-Saudi aggression."

Tension has escalated in the war-torn country after the Saudi-led campaign in Yemen has come under heavy criticism since an airstrike this month on a funeral gathering in the Yemeni capital Sanaa that killed 140 people, according to a United Nations' estimate, 82 according to the Houthis.

More than 4,000 civilians have been killed and 3 million of the country's 26 million people have been driven from their homes by the fighting. Hunger has become widespread in the Arab world's poorest country.

The war in Yemen began in 2014 when Shiite rebels, known as Iran-backed Houthis based in the north, seized the capital Sanaa. In March 2015, Saudi Arabia and its Gulf allies launched a campaign of airstrikes against the rebels. The Saudi-led coalition and the U.S. are backing the internationally recognized government of President Abed Rabbo Mansour Hadi.