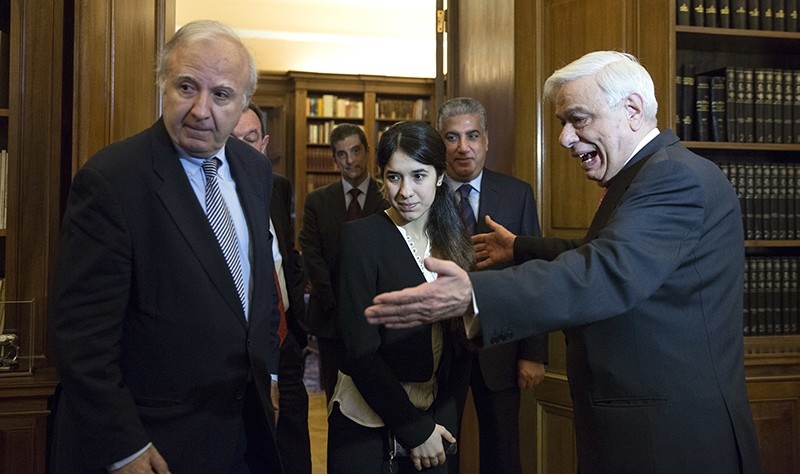 In this Dec. 30, 2015 file photo, Iraqi Yazidi Nadia Murad Basee, center, is welcomed by Greek President Prokopis Pavlopoulos, right, before their meeting in Athens (AP Photo)
by Compiled from Wire Services Oct 27, 2016 12:00 am

Two Yazidi women who survived a nightmare ordeal of kidnapping, rape and slavery at the hands of Daesh terrorists won the European Parliament's prestigious Sakharov human rights prize on Thursday.

Yazidis, a minority group in Iraq which has suffered numerous attacks because of their religion, have faced persecution by the Daesh terror group which dubbed them 'devil worshipers'.

"They have a painful and tragic story" but "they felt compelled to survive to bear witness," European Parliament chief Martin Schulz told the assembly in Strasbourg.

"The courage of these two women, the dignity they represent defies all description."

According to UN experts, around 3,200 Yazidis are currently being held by Daesh, the majority of them in war-ravaged Syria.

Given each year by the European Parliament, the award is named after the dissident Soviet scientist Andrei Sakharov, who died in 1989, and honours individuals who combat intolerance, fanaticism and oppression, often falling foul of their governments as a result.

Murad, a slight, softly spoken young woman, was taken by Daesh from her home village of Kocho near Iraq's northern town of Sinjar in August 2014 and brought to the city of Mosul.

As a captive of the reviled terrorist group, Murad, who today is 23, said she was tortured and raped.

Bashar, who was just 16 when she was taken and is also from Kocho, witnessed family and friends being slaughtered by Daesh terrorists before being enslaved and sold.

After 20 months in captivity she escaped but then fell into the hands of an Iraqi hospital director who also abused and raped her and several other victims.

In a final tragedy, Bashar suffered horrific burns to her face and lost her right eye when one of her friends stepped on a landmine following their flight from the hospital director.

The 2014 massacre perpetrated against the Yazidis by Daesh fighters in Sinjar forced tens of thousands to flee and left an already vulnerable community under perilous threat.

UN investigators have said the Daesh assault on the Yazidis was a premeditated effort to exterminate an entire community -- crimes that amount to genocide.

In speeches and interviews, Murad has voiced deep frustration with the international community for abandoning her people in the hands of grotesquely violent criminals.