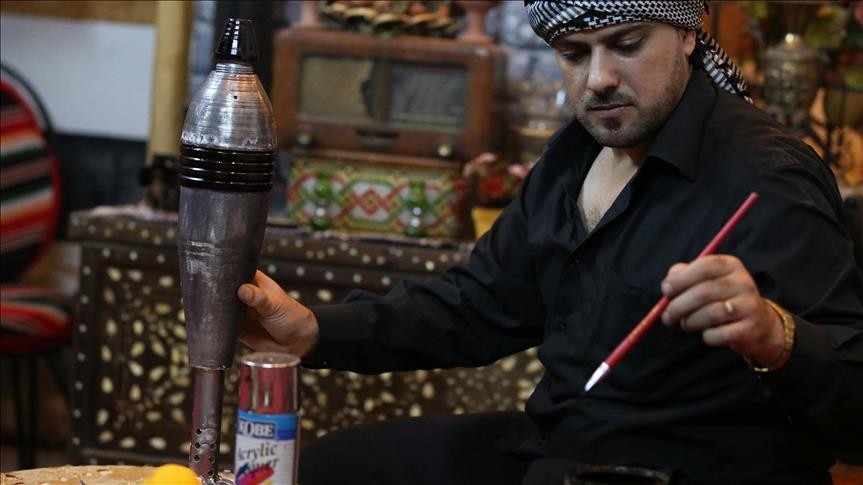 | AA Photo
by Anadolu Agency Nov 02, 2016 12:00 am
An artist in Syria's war-weary Rif Damashq province is using brightly painted shell casings to send a message of peace and determination.​

Speaking to Anadolu Agency, al-Fevz said that his native town of Douma had seen numerous ground attacks and airstrikes in recent years that have left countless spent munitions -- of all kinds and sizes -- in their wake.

"What I'm doing with these shell casings is like rescuing people from the rubble. By painting these casings in bright colors, I'm attempting to dust the death from the bombs that are killing us," he said.

"Through my work, I want to send a message of peace and revolution to the rest of the world," he added.

Inspired by the shell casings he saw scattered on the ground every day, al-Fevz began painting them "to draw attention to the severity of Douma's humanitarian situation".

He has given some of his work to his friends and neighbors, but has kept most of it in his home, which now serves as a makeshift art exhibition.

Al-Fevz says he has been painting since childhood.

"I was never formally taught to paint; I regard it as a gift from Allah," he said.

He first began painting in charcoal pencil. Before the Syria conflict erupted in 2011, he used to paint on glass in an oriental local style.

"Then the war began," he recalled. "The bombardments became so intense that one day I decided to collect the shell casings as mementos."

"Then the idea came to me: why don't I ornament them as an artist?" he remembers. "Soon I found myself adorning them with bright colors."

Al-Fevz has shared images of his work on social media, drawing the interest of several admirers. Encouraged by the positive feedback, al-Fevz is now in the process of improving his unique art form.

Syria has been locked in a vicious civil war since early 2011, when the Assad regime cracked down on pro-democracy protests -- which had erupted as part of the "Arab Spring" uprisings -- with unexpected ferocity.

Since then, hundreds of thousands of people are believed to have been killed and millions more displaced by the conflict, which pits the regime and its regional allies against several heavily-armed opposition groups.