Mosul may be scene for Turkish-Iranian dispute 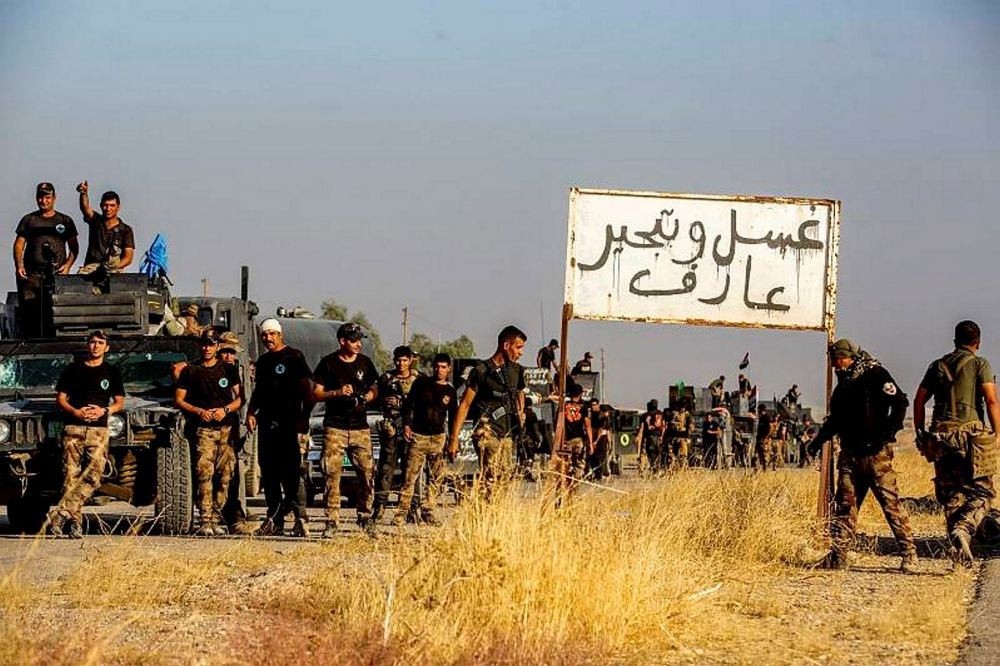 Shiite militias within the Iraqi army during the Mosul offensive.
by Yusuf Selman İnanç Nov 04, 2016 12:00 am

Turkey and Iran's approaches have been widely differing from each other in Syria. Iran's proxies fight against Turkish-backed groups in Syria and may fight in Iraq as well. The Hashd al-Shaabi seems to be posing a major threat to Turkey

Turkish-Iranian political relations have deteriorated after the two countries pledged their support to rival groups in the Middle East, especially after the Arab Spring led to deadly conflicts and wars in Syria, Libya and Yemen. While Turkey has been staunchly rejecting the presidency of Bashar Assad and backing the Free Syrian Army (FSA), Iran has been sending thousands of militants to Syria to fight against Turkish-backed opposition groups. The two countries have also disagreed on the conflict in Yemen as Iran has pledged its support for the Shiite Houthi rebels whereas Turkey said Saudi Arabia's military operation was legitimate.

Although the two countries do not have verbal clashes like Saudi Arabia does with Iran, the battle in Mosul has risen the question of whether Turkey and Iran will get into a proxy war in Iraq's north, since Turkey has been giving military training to Kurdish peshmerga forces loyal to Kurdistan Regional Government (KRG) President Massoud Barzani and certain Sunni Arab tribes, called Hashd al-Nineveh. Iran has been backing Jalal Talabani, Barzani's main opponent, and explicitly supporting Hashd al-Shaabi or Popular Mobilization Forces (PMF), which is famous for its brutality against Sunni civilians. While in Syria Turkey's priority is to clear its border from the PKK's Syrian branch, the Democratic Union Party (PYD), and Daesh, in the post-battle time period in Mosul Ankara is aware of the fact that it will face the threat posed by the PMF, since the militant groups' attacks on Sunni Arabs and Turkmens will create a new refugee wave and help the PKK to be easily located in the area. The PMF has committed several atrocities against civilians after Amerli, Tikrit and several other Iraqi cities have been liberated from Daesh.

Many rights groups, primarily Human Rights Watch, have released reports documenting the atrocities, tortures, displacements and human rights violations. A 2015 Amnesty International report said: "Shiite militias have been abducting and killing Sunni civilian men in Baghdad and around the country. These militias, often armed and backed by the government of Iraq, continue to operate with varying degrees of cooperation from government forces, ranging from tacit consent to coordinated, or even joint, operations." The Long War Journal reported last July on an order signed by al-Abadi that recognized PMF as a separate but legitimate armed force. "According to Office Order 91, the PMF 'will be an independent military formation and a part of the Iraqi armed forces, and linked to the general commander of the armed forces.' The commander of Iraq's armed forces is its prime minister," the journal stated. "PMF is an Iran-sponsored umbrella military organization composed of approximately 40 militia groups which were predominantly Shiite. Civilian authorities did not always maintain effective control of the security forces, the regular armed forces and domestic law enforcement bodies," globalsecurity.com, a webpage that monitors terror groups in the region reported last July. When Barzani in 2015 said they did not need the PMF, al-Abadi defended the group and claimed that it was representing all Iraqis despite the videos circulating on the social media showing how PMF militants burn civilians alive or even ate their hearts.

Turkey has been increasing its military support near the Iraqi border after declaring it will join the battle in Mosul despite Baghdad's rejection. It is clear that the Baghdad administration has been under the heavy influence of Tehran and has called Turkish troops who are in Bashiqa, a town near Mosul to train the Sunni Arabs and peshmerga, occupiers, with support received from Iran. Therefore Turkish President Recep Tayyip Erdoğan said last month: "He [Iraqi Prime Minister Haider al-Abadi] is not the one I will address. Who is he?" The tough words actually were showing that Erdoğan was well aware the Iraqi prime minister was not acting on his own as the Turkish presence in Bashiqa had been approved by Baghdad after the KRG's request.

Resul Serdar Ataş, the managing editor at TRT World, said: "There are five reasons that motivate Turkey to join the battle. Halting the territorial advance of Kurdish militia; concern about massive refugee inflows; wishing to destroy paramilitary actors in order to prevent a civil war stalemate as in Syria; pushing back against Shia dominance of historically Sunni areas; and desire to influence the political structures in Mosul that will replace Daesh rule." Touching on the claims that Iran-backed Shiite militias may commit violence against Sunnis, he said, "Turkey has a military presence in Bashiqa and it is considered a guarantee for Kurds and Sunni Arabs who are afraid of PMF's violent actions." "Turkey may intervene militarily if the PMF dares to commit any violence," he added.

Speaking to Al-Jazeera last week, retired Iraqi army officer Muaayad al-Windawi said, "We cannot predict if there will be a regional clash or not but things are getting worse and there will be big surprises." His prediction seems to be true as freeing Mosul from Daesh will not bring stability to the region. Moreover, it may lead to new clashes among armed groups. Turkey and Iran do not seem to be able to agree on the region's future.
RELATED TOPICS