Fatah's leadership in danger as Dahlan prepares to take over 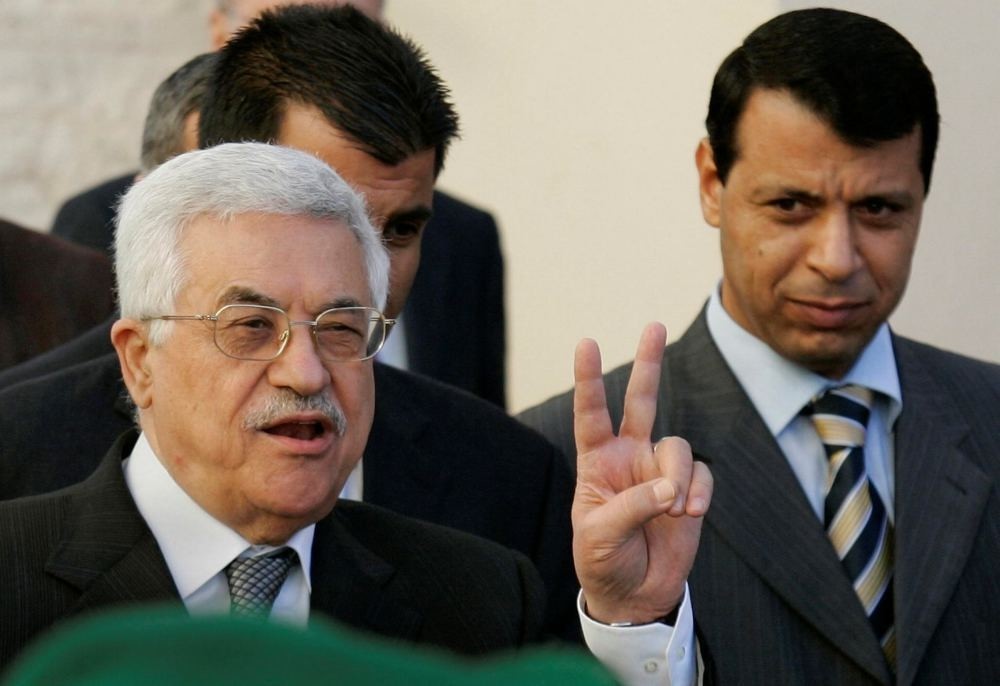 Former Palestinian Security Chief Mohammad Dahlan, known for his cooperation with FETÖ and anti-Turkey stance, receives support from the UAE and Egypt, likely to take Abbas' post at the end of November

Palestine's al-Fatah group prepares to choose its new leader at the end of the month as Mahmoud Abbas, president of Palestinian Authority and the head of al-Fatah, is to leave his post. Abbas' main rival seems to be Muhammad Dahlan who lives in the United Arab Emirates and has not step in Palestine for the last five years. 81-year-old Abbas who had dismissed Dahlan from al-Fatah committee in 2011, lashes out anyone, supporting Dahlan and therefore Palestinians claim Dahlan's supporters are arrests and torture. "The United Arab Emirates, Egypt and Jordan are planning for a post-Mahmoud Abbas era that would leave his Fatah archrival Mohammed Dahlan in control of the Palestinian presidency, the Palestinian Liberation Organization and the Palestinian Authority," Middle East Eye reported on last May, quoting anonymous Palestinian source. Meanwhile, Dahlan has sought ways for a rapprochement with Hamas, initiating humanitarian projects in Gaza Strip. Release of Zaki al-Sakani from a Hamas prison on October 19 also prompted speculation whether Dahlan had a role in this decision. Abbas also sought a way to reconcile with Hamas, saying that he wills to resume reconciliation talks that were hosted by Qatar previously.

There has been a popular support for Dahlan as well and Reuters reported last week that there were clashes between armed Palestinians and Palestinian security forces in Balata Refugee Camp where Dahlan has popularity. "Hundreds of bullet holes scar the concrete walls, shop fronts and trash-strewn alleys of Balata, the West Bank's largest refugee camp, the result of furious clashes between Palestinian security forces and local gunmen. The heavily armed force came before dawn, hunting for a handful of locals they say are criminals and thugs. For six hours the gunfire raged, shattering windows and piercing metal, before the security squad withdrew, empty handed," the report said.

Dahlan is a popular figure across the region as he has joined peace talks for Syria in Cairo in last March, he participated a meeting, organized by Russian President Valdimir Putin on 2015 and appears on several TV channels, presenting himself as a man who can save the region. His animosity against Turkey is clear as he attacks Turkey and President Recep Tayyip Erdoğan at any chance he has. It is clear that Dahlan is supported by the UAE and Egypt that are disappointed with Turkey's active role in the region. Dahlan has received Serbian citizenship in 2013 after promising Belgrade to bring millions of dollars worth investment. "In February 2015, Ivica Dacic, then Serbia's Foreign Minister, confirmed that Serbia had granted Dahlan citizenship in 2013. Dahlan reportedly promised Serbia millions of dollars in investments from the United Arab Emirates, where he had been living since 2011," Balkan Insight reported last July.

Some Turkish media outlets claimed that Dahlan was also involved in the July 15 coup attempt, orchestrated by Fethullah Terror Cult (FETÖ) members. Egypt's statements, immediately after the coup, ensuring FETÖ members that they can take refuge in Egypt brings about the question of whether Dahlan and Egypt's autocratic regime cooperate against Turkey. Besides, his TV channel Gad al-Arabi, operating in Egypt has decorated Egyptian billboards with Erdoğan's posters, depicting him as a Sultan. After the July 15 FETÖ leader Fethullah Gülen gave an interview to the channel.

In a recent interview, New York Times also claimed Dahlan wants to take Abbas' position. "Dahlan lives 1,300 miles from his Palestinian brethren in the occupied West Bank and Gaza Strip. His spacious home here in Abu Dhabi, in the United Arab Emirates, features plush sofas, vaulted ceilings and chandeliers. The infinity pool in the back seems to spill into the glistening waterway beyond. It has been five years since Mr. Dahlan, 55, set foot in the territory Palestinians envision as their future state. But this onetime strongman turned millionaire in exile is the focus of intrigue across the region as Arab leaders seek to force changes over the objections of Abbas," the paper wrote. "The most important world capitals that provided Dahlan with this regional and international network are Cairo and Abu Dhabi, where Dahlan enjoys undeniable influence since he is considered the security adviser of UAE's Crown Prince Sheikh Mohammed bin Zayed Al Nahyan. This position has provided Dahlan with influence that many UAE officials may not enjoy within the state.

Dahlan also enjoys considerable influence in Egypt through his direct ties with (Egyptian President Abdel Fettah) el-Sissi, which allows him to influence Egyptian media. In addition, he has been deploying efforts to buy some news websites in Jordan," Al-Monitor reported last April.
RELATED TOPICS