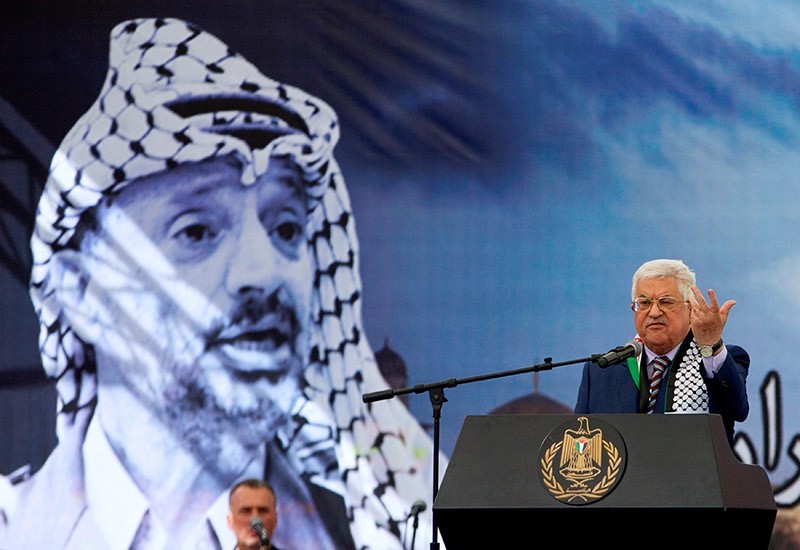 Palestinian President Mahmoud Abbas gestures as he delivers a speech during a rally marking the 12th anniversary of Palestinian leader Yasser Arafat's death, in the West Bank city of Ramallah November 10, 2016. (Reuters Photo)
by Nov 10, 2016 12:00 am

Palestinian president Mahmud Abbas said Thursday he knew who killed Yasser Arafat as he marked the 12th anniversary of the former leader's death but stopped short from giving a name.

Speaking in front of thousands, Abbas said "you ask me who killed him, I know -- but my testimony alone is not enough."

"A commission of inquiry is digging into that, but you'll find out at the earliest opportunity and be amazed when you know who did it."

"I do not want to mention names, because these names do not deserve to be remembered," he added.

Arafat rose to become the leader of the Palestinian movement in the late 1960s, leading an armed struggle against Israel.

More than a decade after his death, he remains a towering figure in Palestinian culture, politics and society.

The Palestinians have long accused Israel of poisoning him, charges the Israeli government firmly denies.

His body was exhumed in 2012 for tests but a subsequent French investigation found no proof of poisoning.

The Palestinians rejected that report, citing apparent inconsistencies between the French findings and separate ones from Switzerland and Russia that gave currency to alleged poisoning by polonium.

Abbas and his longtime rival Mohammed Dahlan have both accused each other of complicity in Arafat's death in the past.

Abbas's comments came with some Arab countries reportedly pressuring the 81-year-old to allow Dahlan, who has been in exile in the United Arab Emirates, to return to the West Bank.

Those moves come amid talk of who will succeed Abbas.

Sources in Abbas' Fatah movement said Arafat's death could be discussed at the party's seventh annual conference, with the commission of inquiry potentially announcing its conclusions.

The conference will be held on November 29.