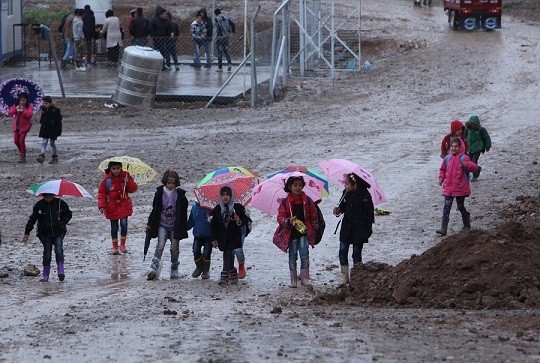 "One bullet plus one bullet equals? Two bullets!" This is how the children of the small Iraqi village of Jaraf were taught mathematics during two years of Daesh rule.

On Saturday, a neighbour opened the gate of their school for the first time since the Daesh terror group was forced out by coalition forces last week.

The children took over the building and were soon playing football with soldiers in the main hall and jubilantly ripping up their Daesh textbooks.

According to the United Nations Children's Fund, 4.7 million children have been directly affected by the conflict in Iraq and 3.5 million are out of school.

In Jaraf, many parents decided not to send their children to school when Daesh took over.

"They were trying to control the children's minds, they would teach them things that encouraged them to kill," said Abu Salem, a 28-year-old father whose house faces the school.

"For example, in the mathematics class, they would learn what is a bullet plus a bullet, or a rocket plus a rocket," said Salem Abdel Mohsen, another father who did not send his children to school under Daesh.

"When the kids grow up, what kind of education will they have had? When they graduate, will they become a doctor? An engineer?," he asked.

Another class described an exercise to be performed whilst singing a song praising the Daesh leader and to which the refrain goes: "All of you join and give allegiance to [leader of Daesh terror group] Baghdadi."

"There was a teacher, she used to tell us that Daesh is good, that they give you food and money. Good money. Better than the army. 'Tell your parents to join us'," Sanaa recounted.