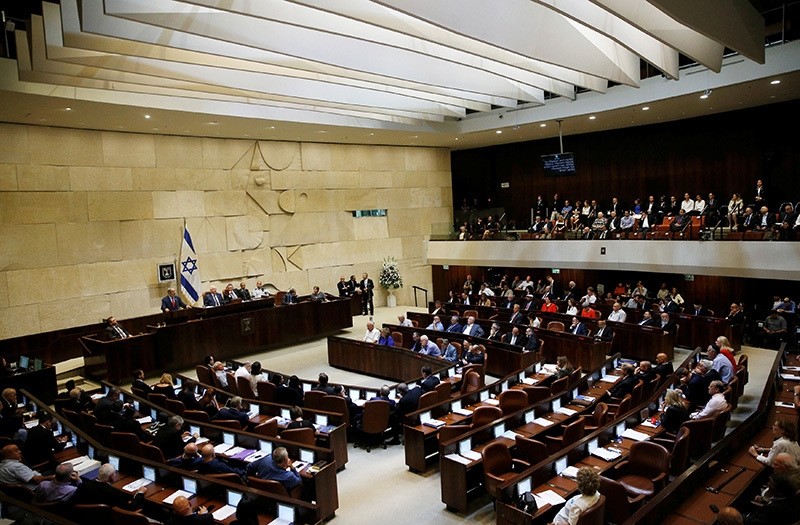 A general view shows the plenum as Israel's Prime Minister Benjamin Netanyahu speaks at the opening of the winter session of the Knesset, the Israeli parliament, in Jerusalem, Oct. 31, 2016. (Reuters Photo)
by Compiled from Wire Services Nov 15, 2016 12:00 am

An Arab lawmaker on Monday raised the adhan, the Muslim call to prayer, in the Knesset in protest at a controversial bill that would limit the prayer call.

Ahmed al-Tibi said his move was meant to protest the Israeli bill that aims to bar mosques from using loudspeakers for the call to prayer in East Jerusalem and Arab communities in Israel.

"This law reflects the fascism that grows inside the Israeli community," Tibi told Anadolu Agency in exclusive statements. He accused Israeli Prime Minister Benjamin Netanyahu of standing behind the controversial bill. Netanyahu on Sunday claimed that the bill enjoyed wide popular support, while Palestinians have roundly condemned the move as a blatant violation of Palestinians' freedom to worship.

Tibi called on Palestinians in East Jerusalem and Israel to stage disobedience against the bill. "Palestinians and Muslims around the world must work to thwart the Israeli decision to limit the call to prayer," he said.

On Saturday, the Israeli Ministerial Committee for Legislation approved the anti-Adhan bill before it goes to the Knesset, where it then must pass three rounds of voting before becoming law.

In a statement, Palestinian presidential spokesman Nabil Abu Rudeineh warned that the Israeli bill will drag the region into a disaster. "The Israeli actions are completely unacceptable," he said. "The Palestinian leadership will go to the U.N. Security Council and to all international institutions to stop the escalating Israeli measures," he said.

Meanwhile, the United States said Monday it is "deeply concerned" by a recent bill in Israel that could legitimize illegal settlements in the West Bank. In defiance of international law, Israeli ministers on Sunday voted in support of a bill that would allow Israeli settlers in the occupied West Bank to remain in homes built on privately owned Palestinian land.

"If this law were enacted, it could pave the way for the legalization of dozens of illegal outposts deep in the West Bank," State Department spokesman Elizabeth Trudeau told reporters. "This would represent an unprecedented and troubling step that's inconsistent with prior Israeli legal opinion and also break long-standing Israeli policy of not building on private Palestinian land."

Despite, the Israel's Supreme Court had ruled the government must evacuate a few dozen families from the Amona settlement and return the land to its Palestinian owners, right-wing lawmakers want to pay compensation instead and allow the settlers to stay.

Israel has occupied the West Bank and East Jerusalem since the 1967 Middle East war. Palestinians demand those territories along with the Gaza Strip for a state but peace talks have stalled since 2014. The Palestinians see Israeli settlements as a major obstacle to reaching a peace agreement and want them dismantled.