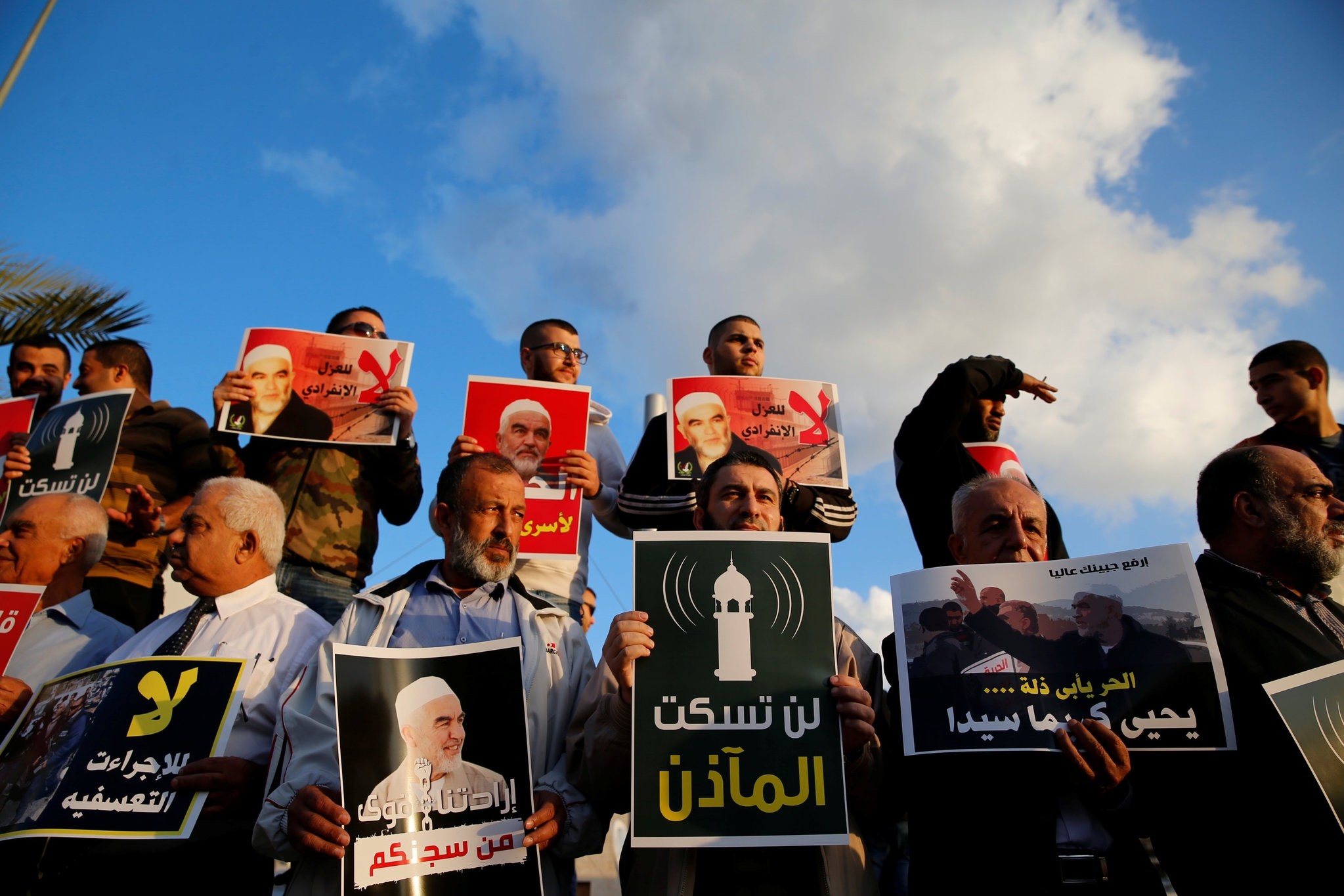 Palestinians protest against the initial approval of a bill to enforce lowering the volume of mosque loudspeakers calling worshippers to prayer, November 17, 2016. (REUTERS PHOTO)
by Daily Sabah with Agencies Nov 18, 2016 12:00 am

Hundreds of Palestinians demonstrated on Friday against an Israeli bill calling for a ban on mosques using loudspeakers for the call to prayer.

In the southern city of Rahat, 100 Palestinians held a rally against the bill, while more than 500 people took part in various demonstrations in the north, police said.

In the northern city of Jisr a-Zarqa, lawmaker Ahmed Tibi of the Arab Joint List called the legislation "a provocation and act of coercion in the place of dialogue and tolerance", a party spokesperson said.

In Gaza, hundreds of people held a protest march through the Jabalia refugee camp near the enclave's northern border.

Yusef al-Sharafi, a Hamas leader, told the crowd that "this unprecedented Zionist decision is an encroachment on the freedom of Muslims".

"Attempts to ban the Azan (call to prayer) are doomed to fail because of the steadfastness of the Palestinians," he said, reiterating the long-standing Hamas demand that the Palestinian Authority end its security cooperation with Israel.

The bill, which is currently awaiting approval before it is presented to the Knesset, or Israeli parliament, has the support of Prime Minister Benjamin Netanyahu.

It applies to all religions across Israel but many fear it is aimed at mosques that broadcast the Adhan, or call to prayer, five times a day. The planned legislation specifically mentions Israelis who "suffer regularly and daily from the noise caused by the call of the muezzin from mosques."

Before it becomes law it must pass three rounds of voting by lawmakers. A vote scheduled for Wednesday was delayed.

Many Israelis have condemned the bill as an attack on freedom of religion and part of a pattern of persecution against Muslims.

Around 17.5 percent of the population in Israel are Palestinian Muslims who remained in their lands during the Israeli occupation in 1948, but they complain of discrimination and are under-represented in high-level jobs.