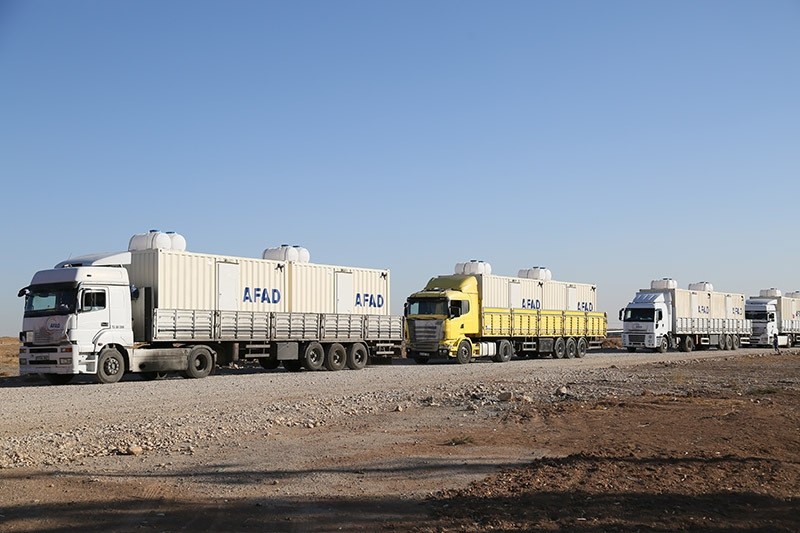 The 108-truck convoy is carrying some $6 million worth of humanitarian aid, Safak Lostar, the Turkish Red Crescent's coordinator in Iraq, told Anadolu Agency.

"Of 108 trucks in the convoy, 78 were dispatched by the AFAD and 30 were sent by the Turkish Red Crescent," he added.

"Humanitarian supplies include materials for building makeshift tents, containers, beds and blankets," Lostar said, adding that the aid would be distributed to families in Mosul "as soon as possible".

"Since the operation to liberate Mosul [from the Daesh terrorist group] began on Oct. 17, we have been trying to help our brothers there," Lostar asserted.

He went on to note that the Turkish Red Crescent had already sent some 20 tons of humanitarian assistance to the crisis-rocked region.

Some of the aid-laden trucks, he said, would be handed over to the Iraqi Red Crescent and the local Iraqi authorities upon their arrival near Daesh-held Mosul.

The rest, he added, will be kept in storage and distributed to local families according to their needs.

On Oct. 17, the Iraqi army -- backed by U.S.-led coalition airstrikes and local allies on the ground -- began a wide-ranging operation to retake Mosul, Daesh's last stronghold in northern Iraq.

Once Iraq's second largest city in terms of population, Mosul was overrun by the terrorist group -- along with large parts of the country's north and west -- in 2014.

Recent months have seen the Iraqi army and its allies retake much territory, especially on Mosul's outskirts and in Iraq's western Anbar province.